The Chicana and Chicano Studies department at The University of New Mexico has organized a visit by United States Poet Laureate Juan Felipe Herrera.

The visit, which takes place Dec. 7, includes an educational writer’s exchange/platica and public reading. Herrera is a poet, performer, writer, cartoonist, teacher, and activist who draws upon his experiences as the child of migrant farmers to give vivid expression to everyday life. He has received grants to teach poetry, art, and performances in a variety of settings, including community art galleries, such as the Galería de la Raza in San Francisco, California, prisons, and educational institutions. 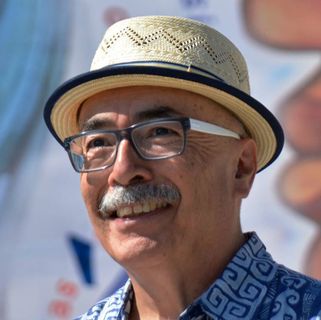 “We are overjoyed that Juan Felipe Herrera will be visiting with UNM students and the Albuquerque community,” said Irene Vasquez, chair of Chicana and Chicano Studies. “As the first Latino to earn the title of U.S. Poet Laureate, Herrera is thoroughly committed to beauty and diversity and he has demonstrated these values throughout his entire career.”

First-year college students enrolled at UNM and middle and high school students from the Native American Community Academy will have an opportunity to dialog with Herrera and receive feedback on their creative writing.

“This is a lifetime opportunity for our students whose imaginations and aspirations can be reinvigorated through their educational encounter with a professional educator and a craftsperson at the very top of their field,” said Vasquez.

That evening, Herrera will also give a free public presentation of his work that will be open to campus and community wide audiences from 6 p.m. to 8 p.m., also at the National Hispanic Cultural Center. A question and answer session and book signing will follow the public presentation. Bookworks, a local independent business, will sell the author’s books on site.

“As the child of migrant farmworkers Herrera broke through many educational and social barriers to rise to his renowned stature. He is a uniquely talented writer and one who consistently works to bring his art to students and the community,” said Vasquez. “He often lends his time and voice to support migrant and indigenous people’s rights as well as supporting programs centered on underserved youth.”

Vasquez said she hopes the program will critically engage UNM and other local students in a dialog on the use of art and performance in influencing 21st century social issues.