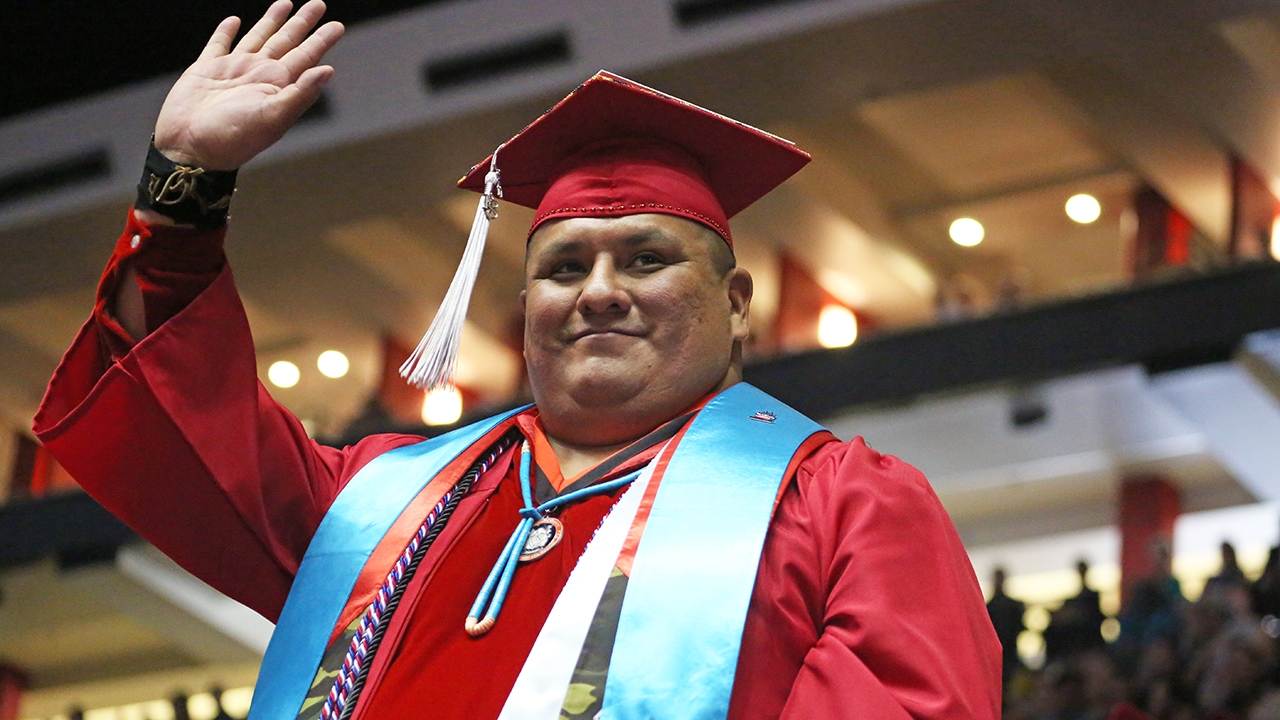 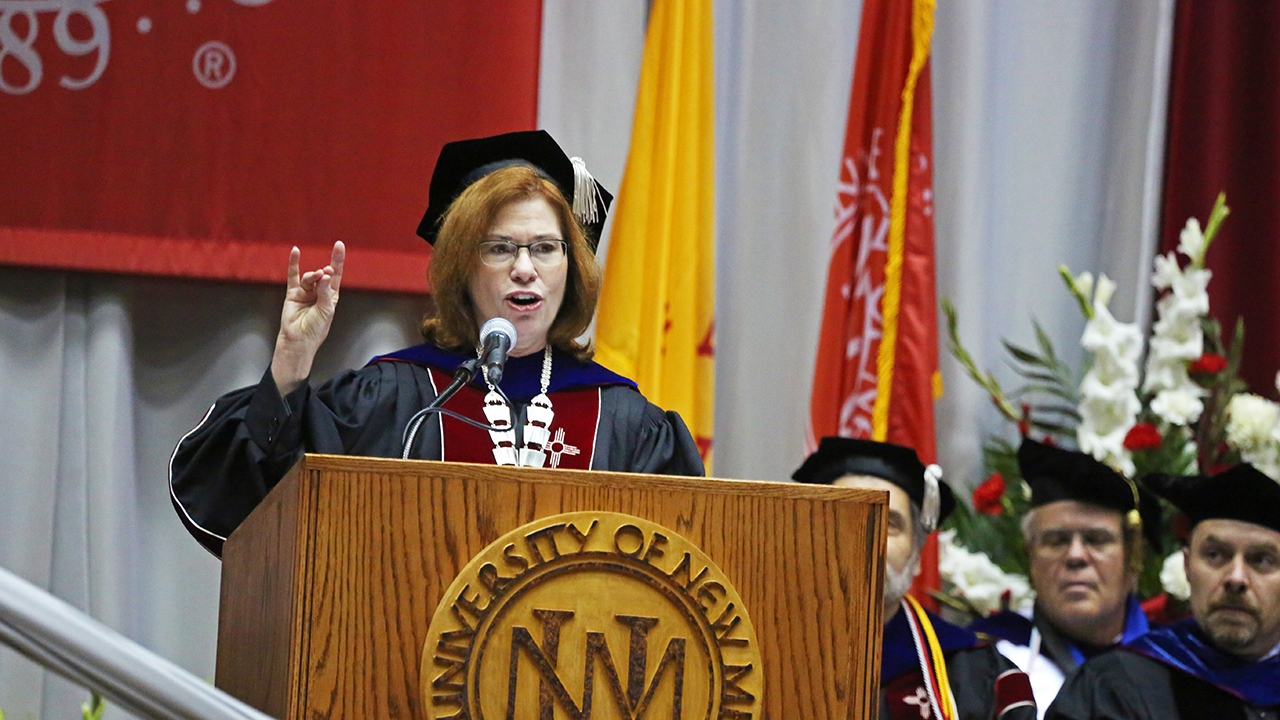 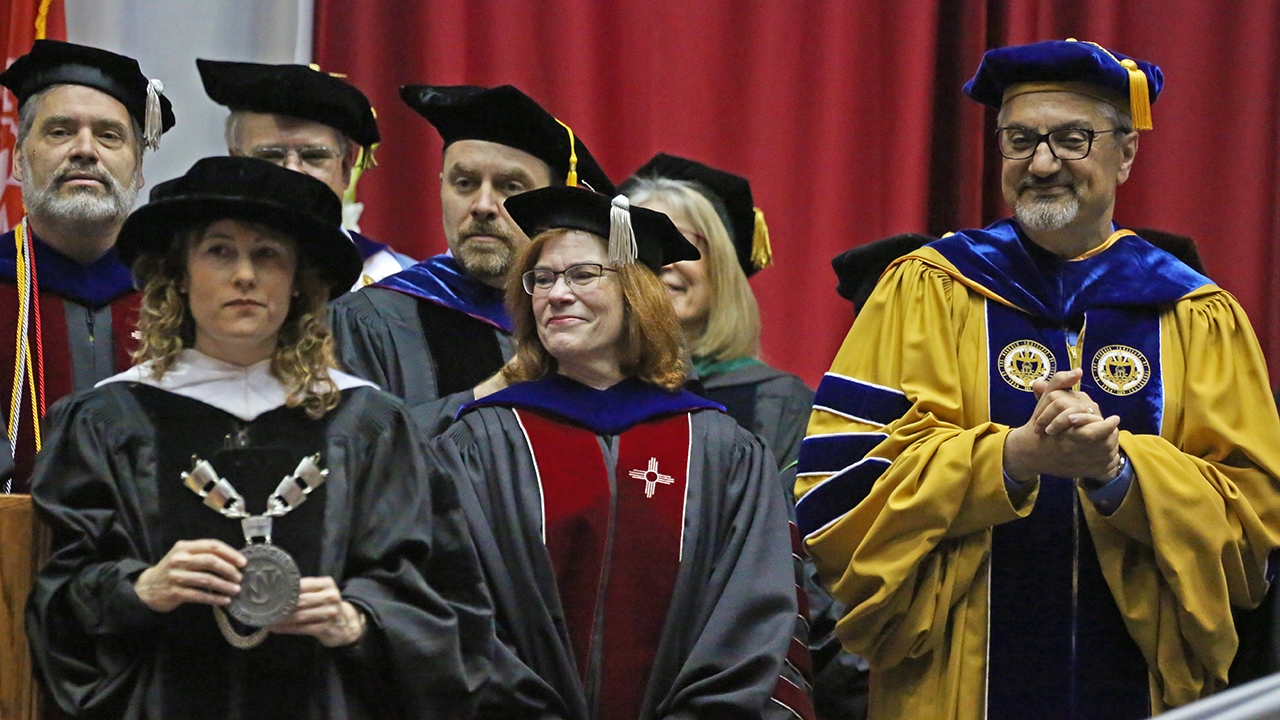 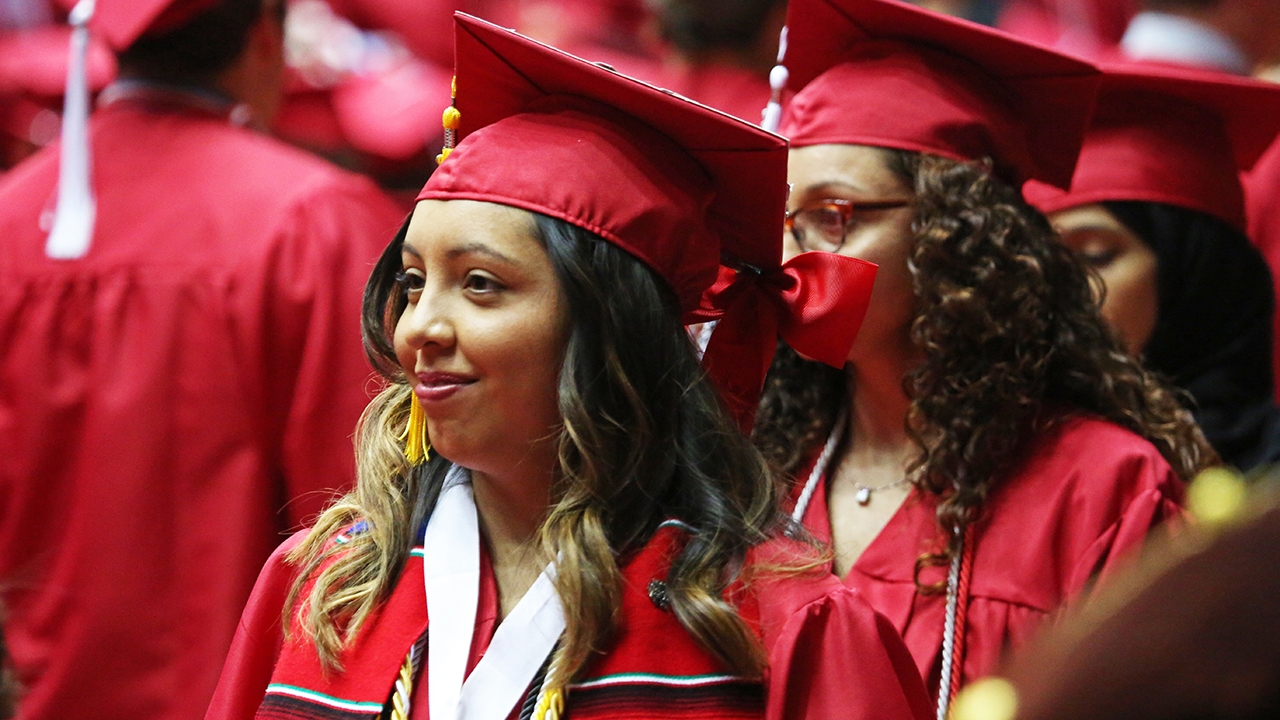 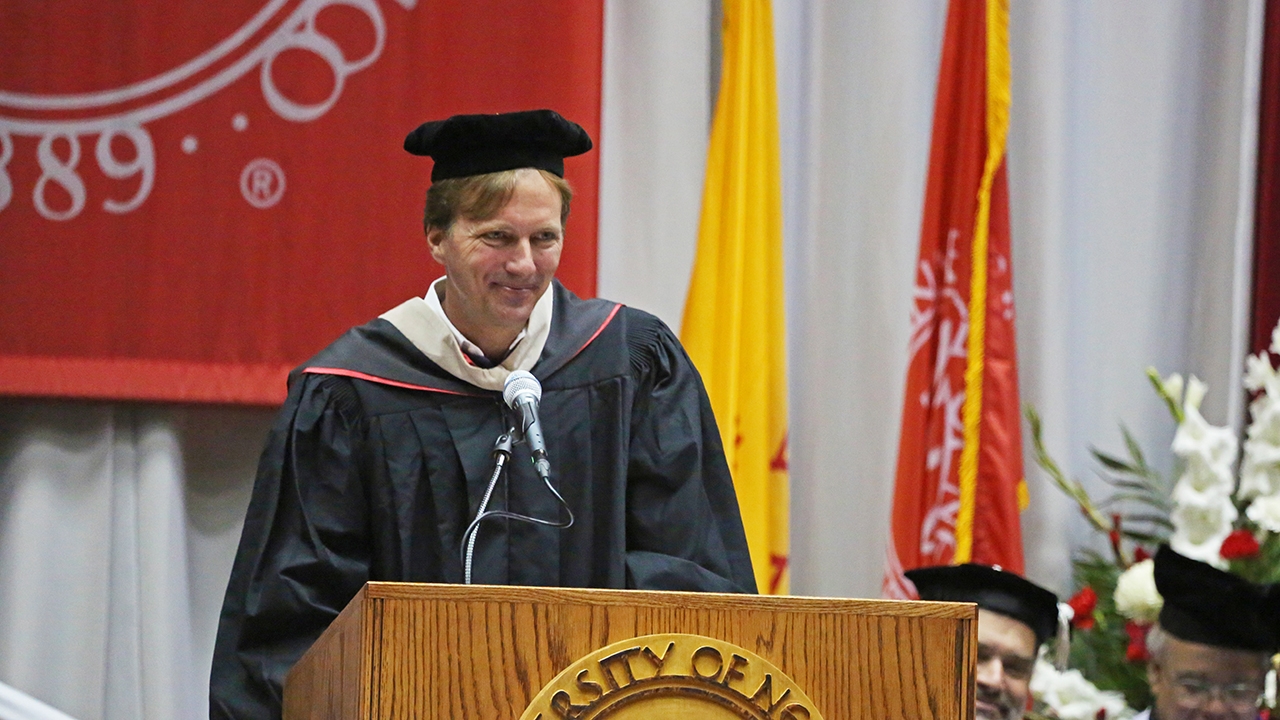 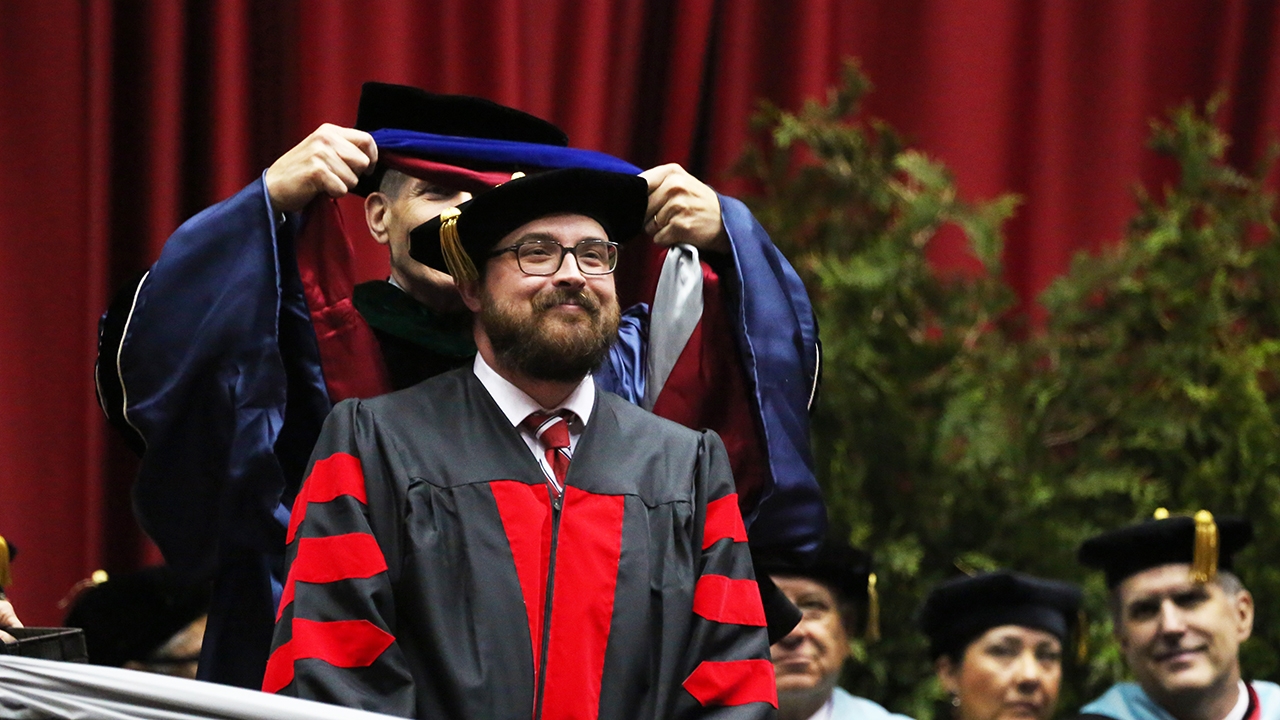 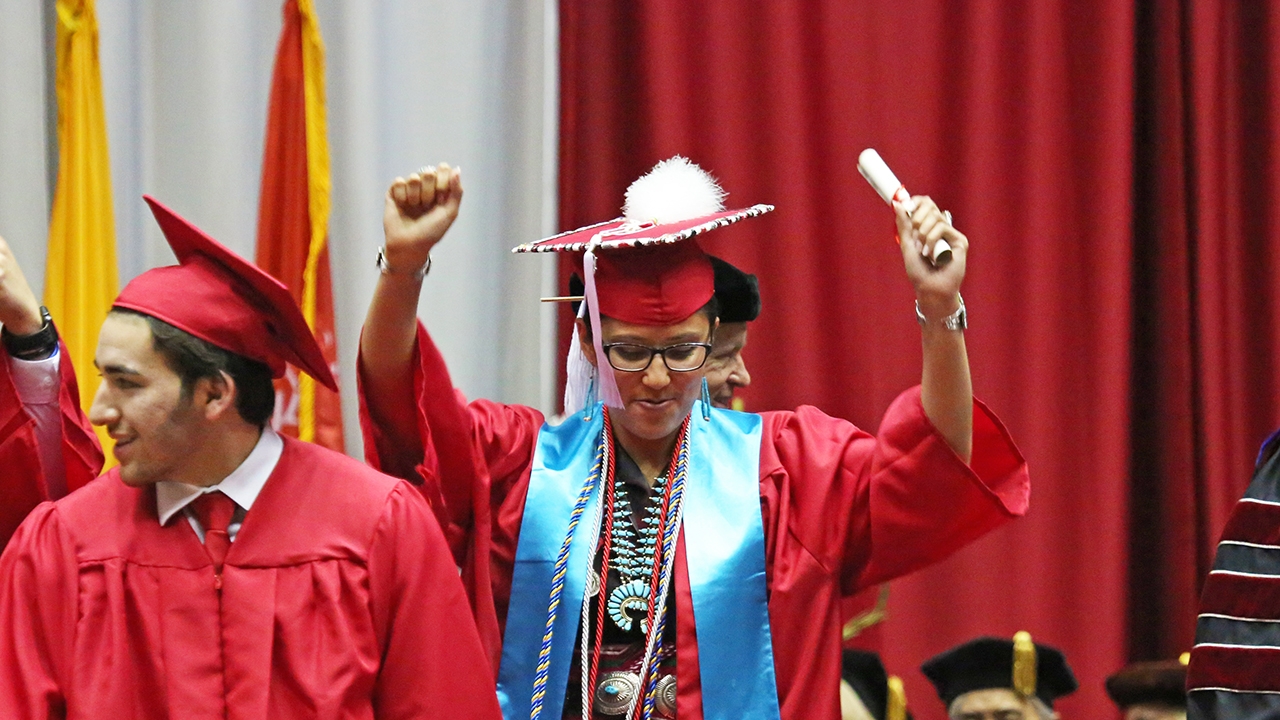 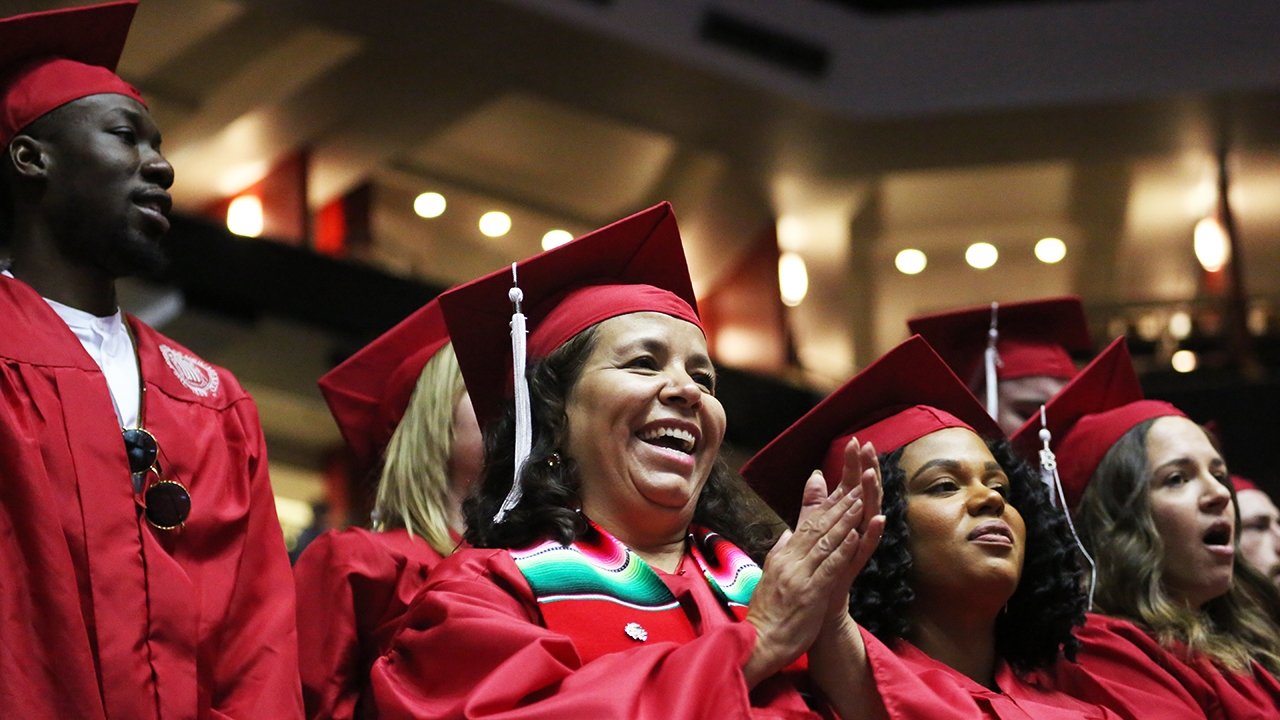 A crowd of more than 11,000, including graduates, families, and guests, gathered at Dreamstyle Arena Saturday as The University of New Mexico celebrated the Class of 2018 and the installation of its 23rd and first-ever female president, Garnett S. Stokes.

The morning was steeped in tradition beginning from the grand entrance of UNM’s Golden Graduates, the Class of 1968, who began the procession, to a colorfully dressed group of senior administrators, deans and marshals in academic regalia who helped usher in more than 3,800 students receiving degrees and certificates.

UNM’s 2018 Commencement & Installation of President Stokes is available on UNM’s Facebook page for those unable to attend who wish to watch the ceremony.

That set the stage for the entrance of Stokes, who was escorted by husband, Dr. Jeff Youngrenn, a forensic psychologist and retired Colonel in the U.S. Army.

A UNM ROTC Joint Color Guard, including members of the U.S. Air Force, U.S.  Army and U,S. Marines, led to a stirring performance of the National Anthem sung by soprano Connor Murphy-White, who received a Master’s of Music.

After a brief welcome from Vice Provost for Enrollment and Analytics Terry Babbitt, Regents’ President Robert Doughty began a short installation of Stokes where she was presented the presidential medallion symbolizing the authority of the president as the chief executive of the University.

“The University’s evolution has been led by 22 presidents over 129 years and now UNM has added to its rich history with its first female president taking the helm,” said Doughty. “We look forward to Dr. Stokes leadership as the 23rd president of The University of New Mexico as she will undoubtedly build on the successes of her predecessors and add to the foundation of our future.”

Stokes, who was selected on Nov. 1, 2017 as the first female president in UNM’s 129-year history, was then presented with the Presidential Medallion officially signifying the beginning of her tenure as UNM president. Stokes, who took office on March 1, delivered her installation address congratulating and thanking graduates.

“First, congratulations – UNM Class of 2018,” said Stokes with a wide smile. “Thank you for allowing me the privilege of sharing this day with you to be officially installed as your 23rd president. Today marks a defining milestone in our lives. For our graduates you have come to a point of completion in your Lobo journey. For me, I’m just beginning. We share in being chosen to be Lobos, and in turn, choosing to accept that distinction.”

Stokes used her platform to set a tone for UNM’s new direction choosing the words ‘Intention & Impact’ as the guiding principles of her presidency.

“These words don’t define an overarching vision for UNM, in and of itself, but rather they serve as guideposts connected by action and aligned with vision and values,” she said. “Intention is defined as a purpose or goal – a thing intended, a plan. Impact is defined as having a strong affect on someone or something.”

Stokes mentioned two stories – a recommendation by a psychology professor to attend graduate school, and years later, a senior professor in the department of psychology at the University of Georgia, who told her out of the blue she’d become the head of the department – that helped shape the future of her academic studies and her career as an administrator in higher education.

Albuquerque-native Ian McKinnon delivered the keynote speech. He and his wife Sonnet, a UNM alumna, have donated more than $7 million to various projects at UNM including the new McKinnon Center for Management. He gave graduates two pieces of advice – keep a gratitude journal and reclaim your eyes from your smartphone, the latter creating a bit of a clamor among the crowd.

Missing from this year’s ceremony was the Tom L. Popejoy Dissertation Prize, awarded to Yan Yi “Anny” Chung, who earned her Ph.D. in Biology from UNM. She completed a dissertation titled, “Plant and Microbial Interactions are Strong Determinants of Plant Population and Community Dynamics.”

Chung’s work investigated how interactions between plants and their microbial associates shape plant competition and coexistence, as well as long-term population and community trajectories.

For more on The University of New Mexico’s 2018 Commencement and Installation, including inspiring graduate videos, visit Lobo Grad.