Scholes’ lecture will focus on his research about design principles and paradigms for directing and regulating light-initiated energy flow in man-made and natural systems, like proteins in photosynthesis. Scholes’ research combines ultrafast laser spectroscopies—methods such as 2D electronic spectroscopy—with theoretical studies to understand mechanisms of light harvesting, electron transfer and other photo-initiated processes. 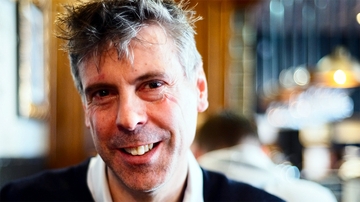 He will discuss how vibrational and vibronic wavepackets entrain ensembles of molecules, like the synchronized flashing of fireflies, and how this can be used to probe mechanisms of ultrafast dynamics and how in-step vibrational motion might be employed to control function on ultrafast timescales. Scholes will give examples that include light-harvesting in photosynthesis, energy flow in organometallic molecules that are ‘wired’ by Fermi resonance, and ultrafast electron transfer in molecular systems.

Scholes has had a long-standing interest in mechanisms of electronic energy transfer and ultrafast excited state dynamics. His current research includes studies of photosynthesis, working out how vibrational wavepackets can report on the mechanism of ultrafast processes, inquiring how chemical systems might encode unexpected quantum information, and demonstrating coherent or quantum phenomena in chemistry. Scholes has various other interests that include hi-fi audio, writing with fountain pens, and making furniture in his woodworking shop.

Currently, Scholes is the William S. Tod Professor of Chemistry and the Principle Investigator for the Scholes Group at Princeton University. His work has inspired new research in areas ranging from theoretical quantum physics to chemical dynamics to biology and has been highlighted in magazines including New Scientist (2010, 2011), Wired (2010, 2011), Scientific American 2009, 2010), Science News (2010, 2011), Nature (2011), Focus (2012), Cosmos (2014), and variety of Public Radio and Television shows.

He is also the deputy editor for the Journal of Physical Chemistry Letters, Fellow of the Royal Society of Canada, a Senior Fellow in the Canadian Institute for Advanced Research program Biology, Energy, Technology, Adjunct Professor at the Beijing Institute of Technology, and a Professorial Fellow at the University of Melbourne.

Scholes was elected a Fellow of the Royal Society of Canada in 2009 and has received numerous awards that include the Raymond and Beverly Sackler Prize for his contributions to ultrafast laser science (2011), Royal Society of Chemistry Bourke Award (2012), and the NSERC John C. Polanyi Award (2013).

The Milton Kahn Endowed Lecture Series was established in honor of Professor Milton Kahn. Kahn was a Chemistry graduate student at the University of California. He focused on Radiochemistry throughout his career. During the Manhattan Project, Kahn studied under Emilio Sengrè at Los Alamos Laboratory. After the war, Kahn published numerous academic papers. In 1948, he became an assistant professor of Chemistry at UNM. He was then promoted to professor in 1958.

In 1980, UNM established the Milton Kahn Endowed Lecture Series in Chemistry to honor Milton’s legacy and to allow a current Chemist to present research. As a distinguished, beloved teacher, mentor and friend to many students and colleagues over 32 years of service of UNM, his work and influence were cherished by the University. The recipients of the lectureship have generally been prominent radiochemists and physical chemists.