For many students at The University of New Mexico, college is a time for self-discovery and exploration. Many try to find their passion and work to realize the impact they want to make on the world. But, for UNM senior Kyle Stepp, it’s the obstacles he’s faced in his life that have helped him discover his purpose.

“Turn your tragedy into your triumph. Those are the words I try to live by,” said Stepp. “Use your adversity to help others make this world a better place.”

Growing up in an abusive home, Stepp said his parents thought of him as more of a burden than a blessing. He dealt with abuse, bouncing around between homeless and domestic violence shelters and being forced to switch schools 13 times between elementary and middle school. It was a life no child should have to live.

Just before high school Stepp moved to Albuquerque to live with his grandparents, putting his tumultuous past behind him. The Del Norte High freshman finally had the opportunities and the stability he had always wanted and needed.

The school year started out like many others. Stepp had the chance to play varsity sports and lived, what he called, a normal high school life. But, while everything finally seemed to be working out on the outside, something was very wrong on the inside.

What started as a typical game of kickball during P.E., ended up sending Stepp to The University of New Mexico Children’s Hospital. It was there he was told he had stage 4 osteosarcoma, a rare form of cancer.

“I was given a 20 percent chance to live,” said Stepp. “I had stage 4 bone cancer and it had metastasized to my lungs.”

“Every statistic says I shouldn’t be here. I know that I’m here for a reason and a purpose and I don’t want to waste a single moment.” – Kyle Stepp

He admits, a cancer diagnosis of that magnitude is a very scary thing with a lot of unknowns. But, even with the fear that cancer brings, Stepp, who was only 14 at the time, said he had an overwhelmingly positive outlook about the diagnosis.

Over the next three and a half years, he underwent 98 chemotherapy treatments and more than a dozen surgeries, losing his left knee, femur and tibia. The bones were replaced by a steel endoprosthesis. 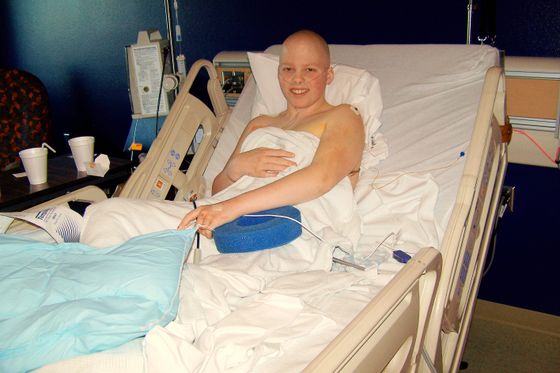 “Through that journey I found my purpose,” he said. “I healed by being able to visit the other kids. My inspiration came from my friends during our battle together because I believe that no child should ever fight alone and I felt healing through helping others.”

Stepp became a mentor of sorts at the Children’s Hospital. He said doctors would introduce him to new patients to give them a friend they could gain strength from. He became a national spokesperson for the Sunshine Kids Foundation and an ambassador for the Children’s Miracle Network, using his story to encourage others.

“I think there’s a beauty behind being able to look into someone’s eyes and say, I’ve been there and I’m here to help you through this,” he said.

While in treatment, Stepp also became very close with nine other cancer patients who he still calls his best friends. Sadly, none of them are alive today but Stepp uses their memory to inspire and motivate him to succeed. 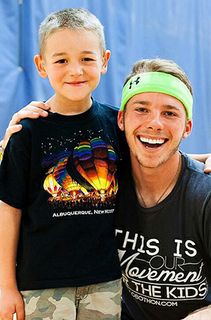 Stepp with a young participant at the LoboTHON Dance Marathon.

“I look at every single day as an opportunity to make a difference in the lives of others so I can repay my life,” he said. “Every statistic says I shouldn’t be here. I know that I’m here for a reason and a purpose and I don’t want to waste a single moment.”

“I wanted to make UNM the best place it could be for future Lobos, so they can have an even better college experience than I did,” he said.

Stepp is graduating with a B.A. in Organizational Communication with minors in Integrative Studies for Innovation and Management. After UNM, he’ll move to Indiana to work for the national Alpha Tau Omega Fraternity and continue to support and mentor kids who are struggling.

During this year’s commencement ceremony, Stepp will be giving the keynote address to the Class of 2016. With it, he hopes to inspire his fellow Lobos to turn their passion into their purpose and use every day to make a positive impact in this world, no matter what life has thrown at them.

“You can either get bitter or you can get better, it’s that simple,” he said. “You either take what’s been dealt to you and allow it to make you a better person or you can allow it to tear you down. The choice does not belong to fate; it belongs to you.”