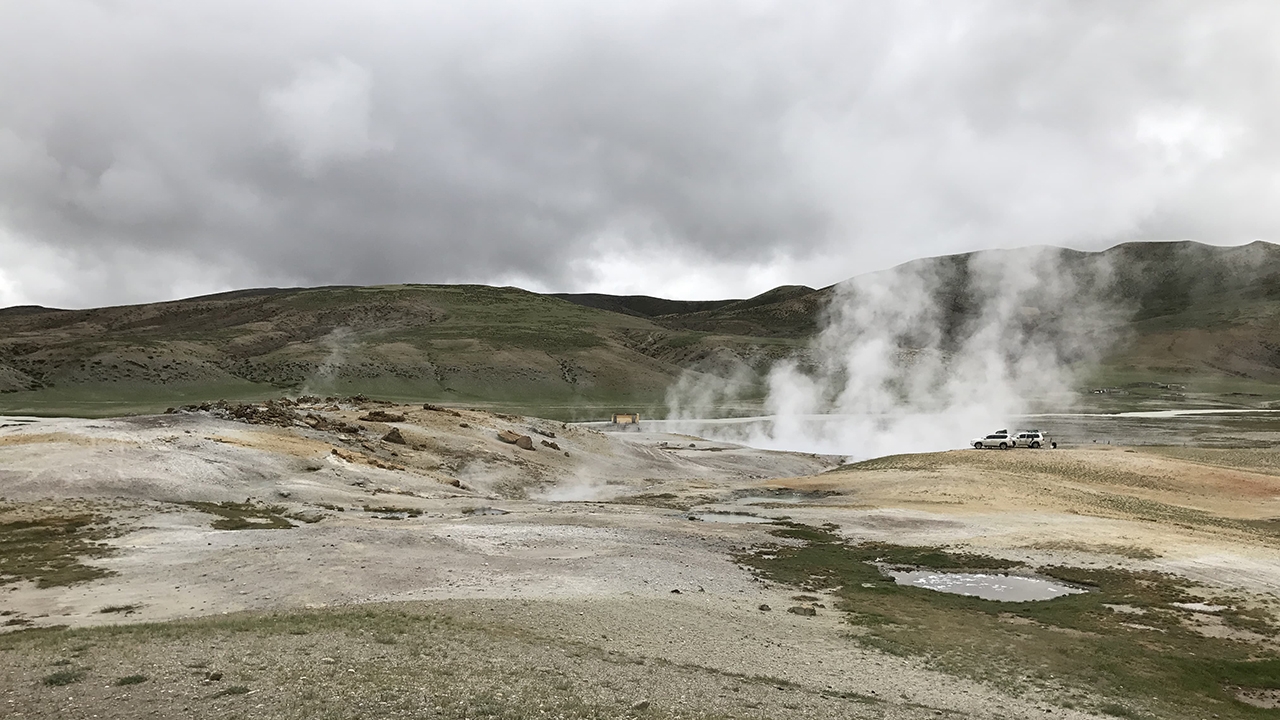 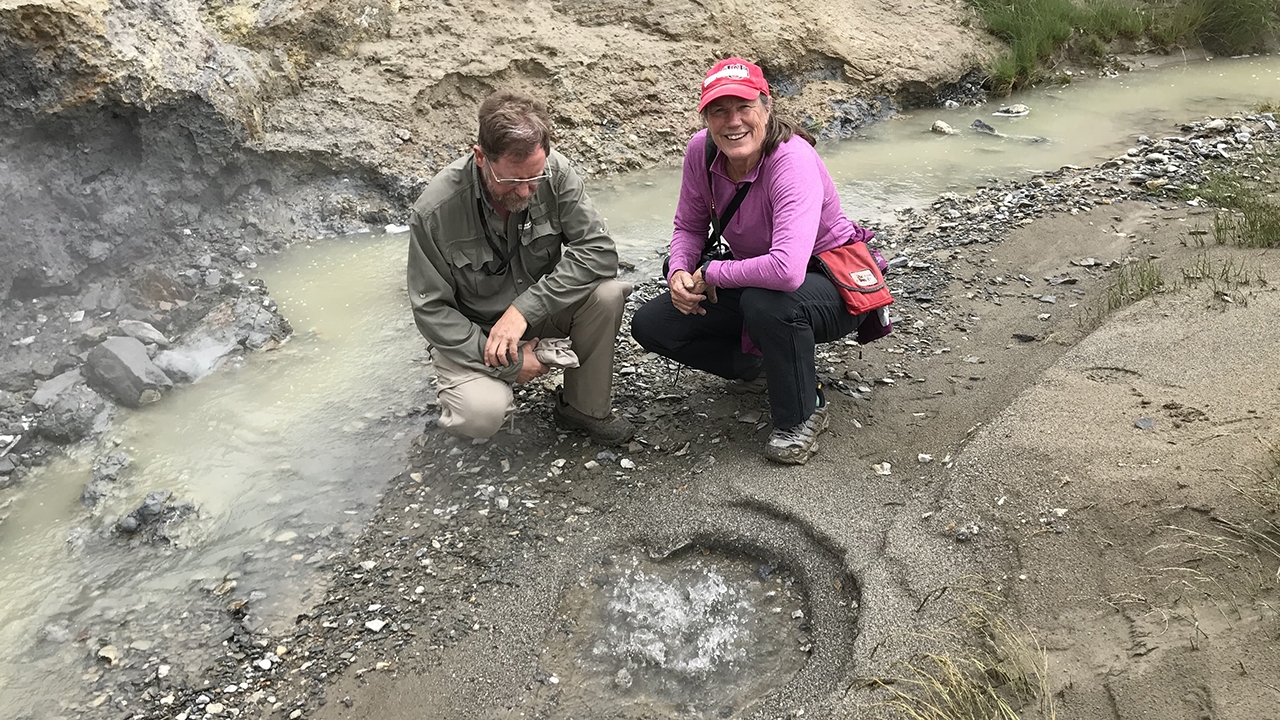 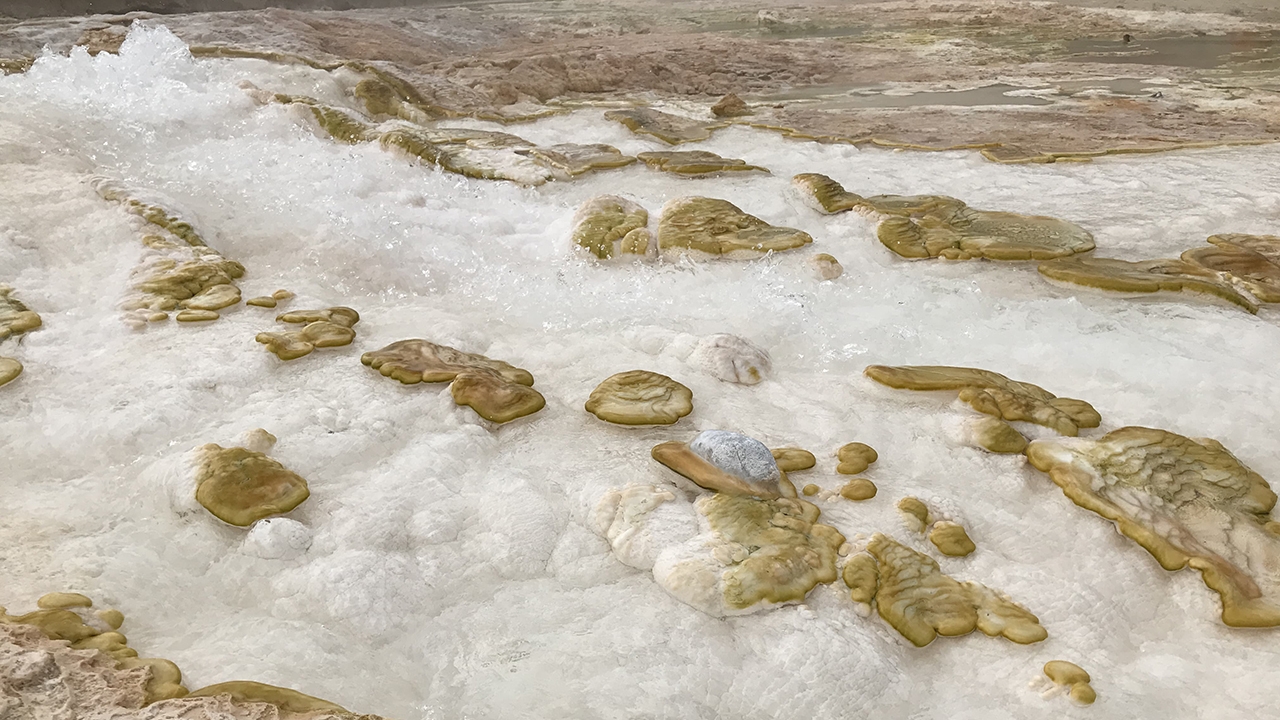 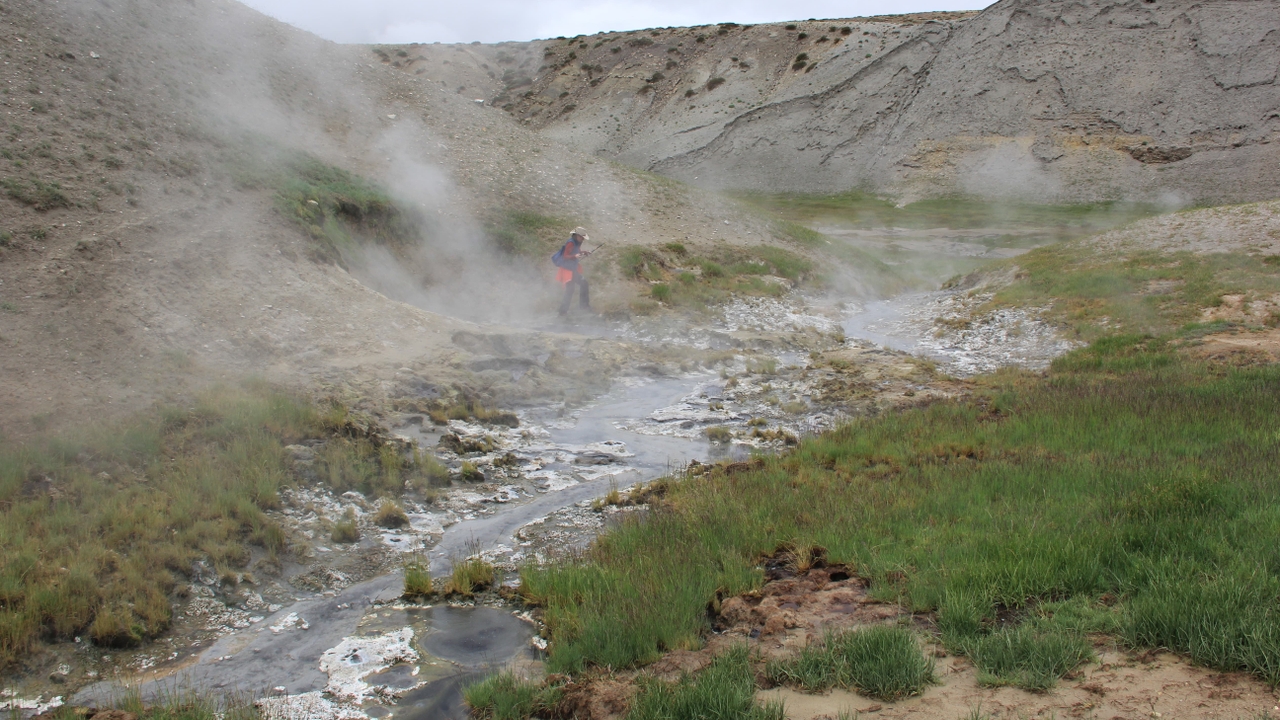 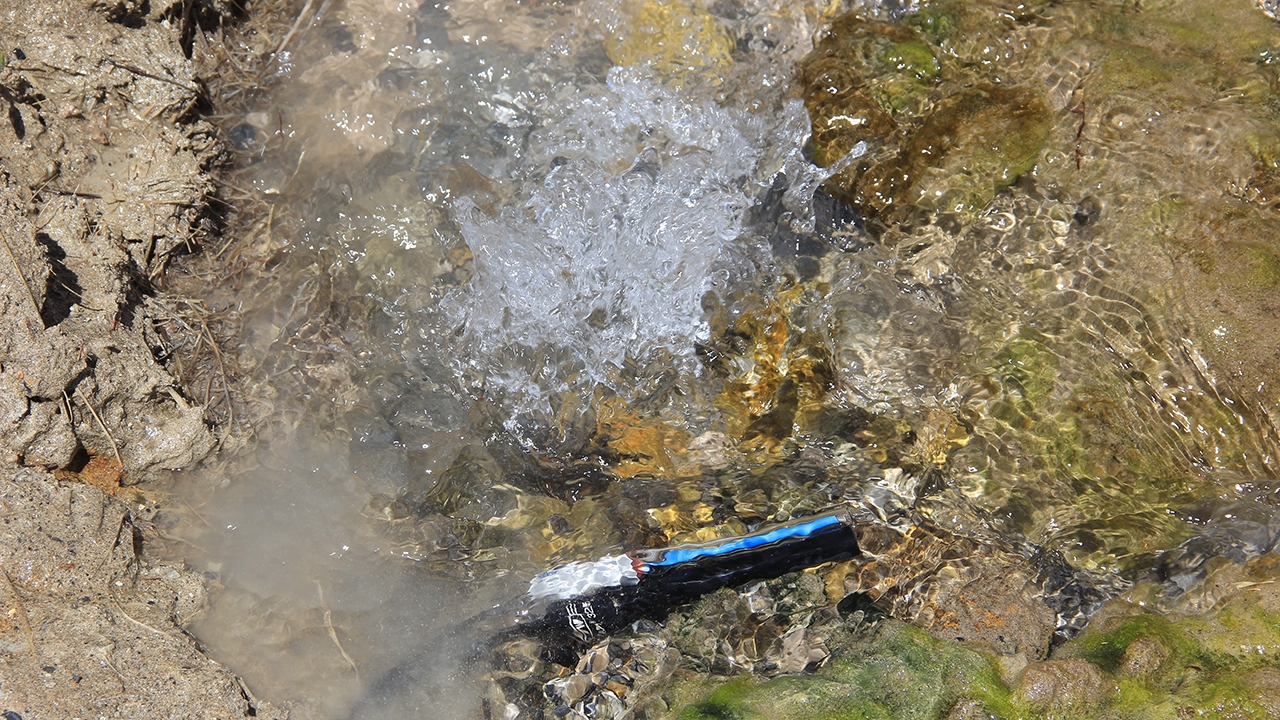 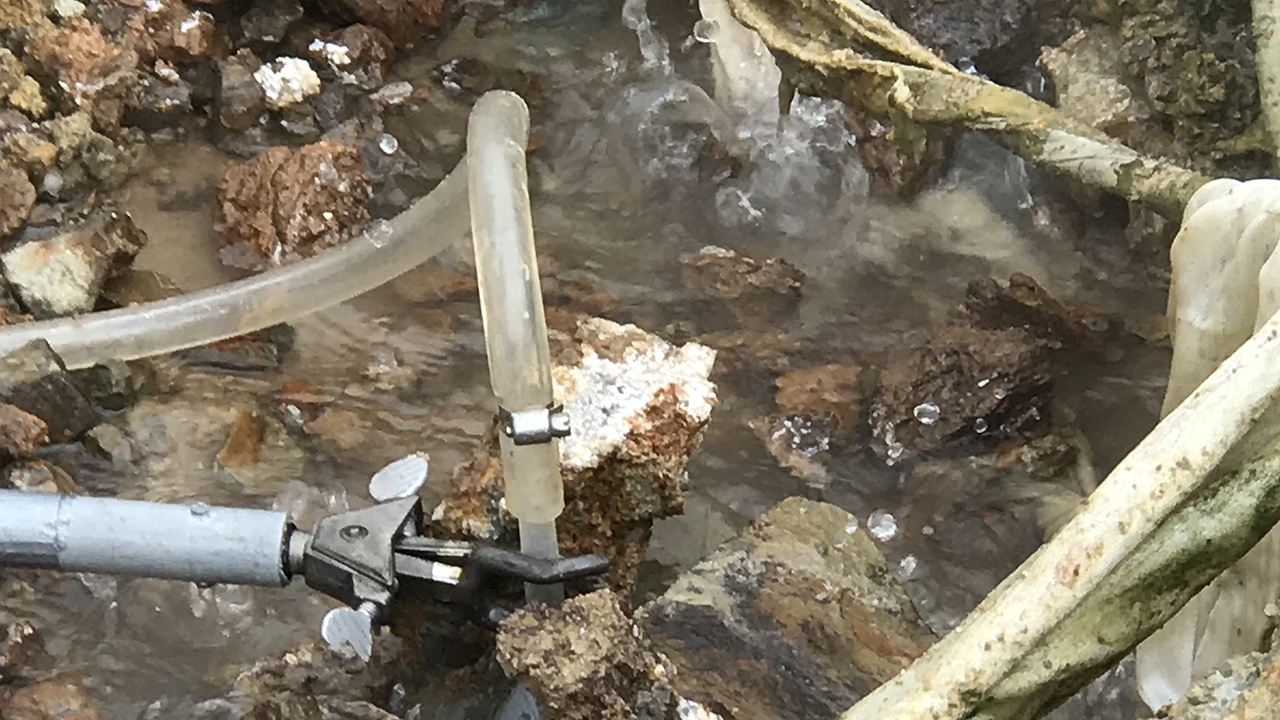 Close-up of the tools 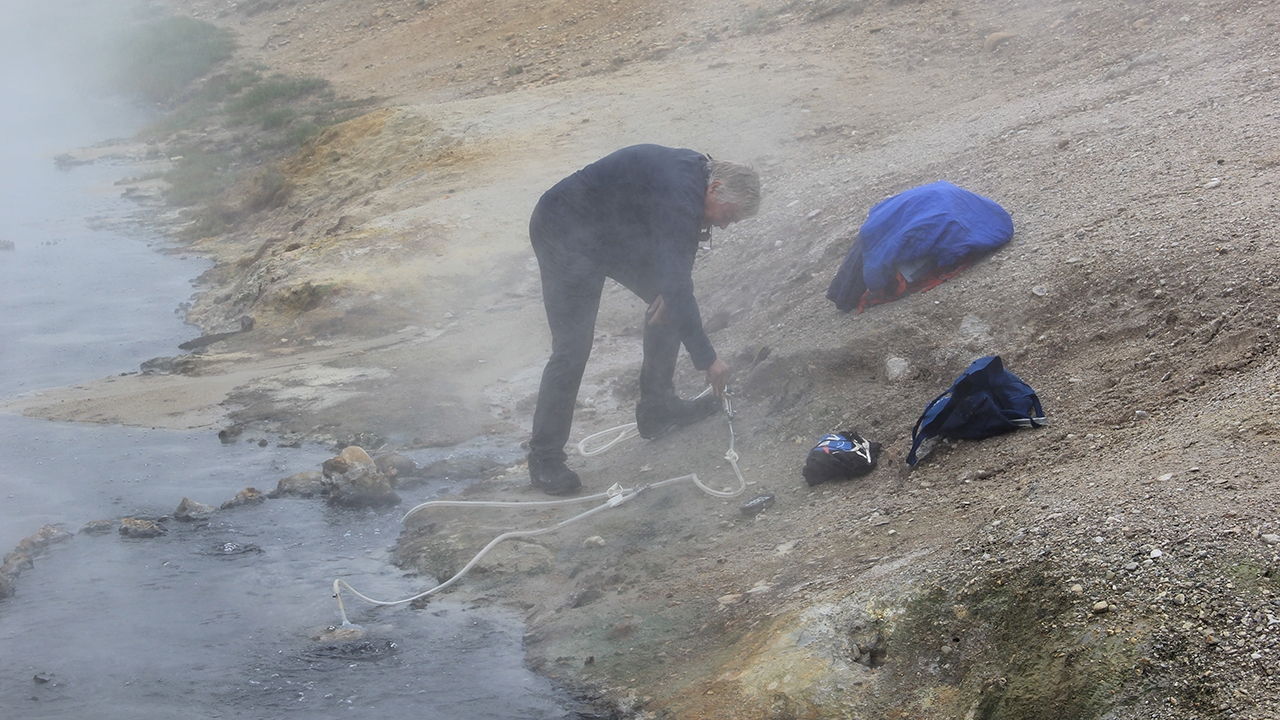 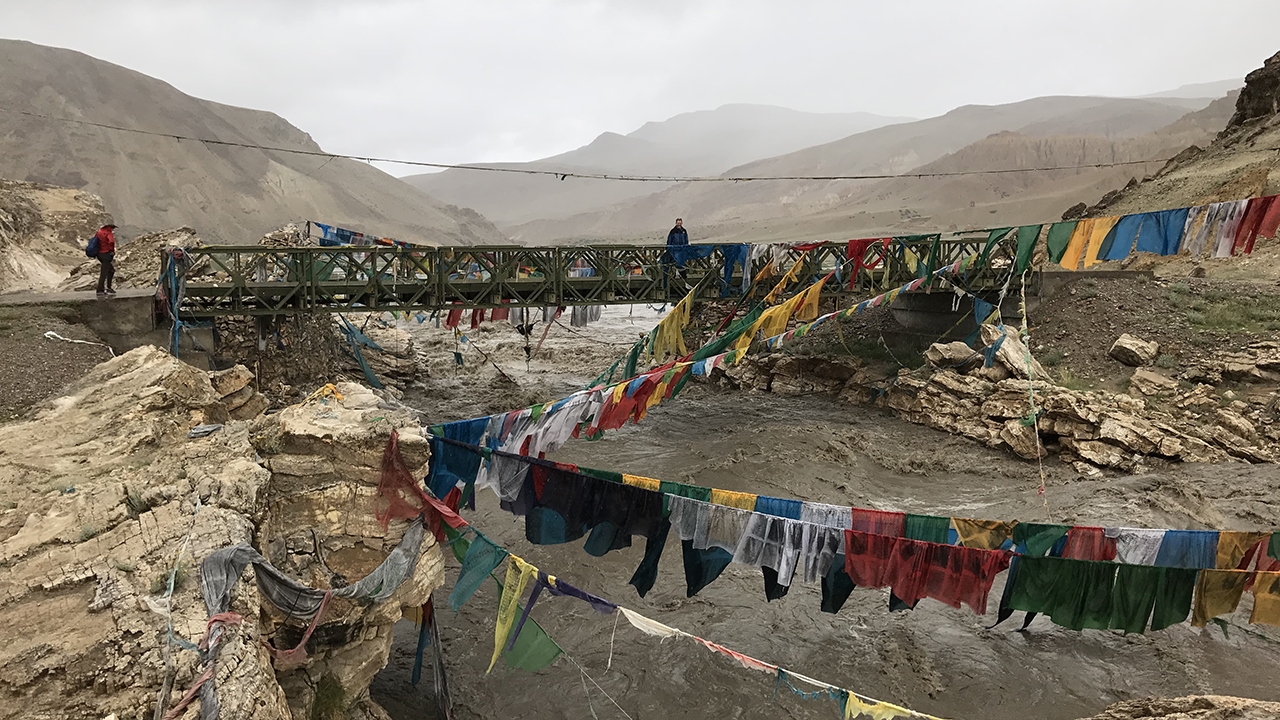 a typical bridge over a raging stream carrying snowmelt from the Himilayan highlands. The stream is cutting through a thick travertine deposit formed from geothermal springs along this stretch of the river. Spring access points and river crossings are heavily decorated with traditional Tibetan prayer flags all across the Tibetan Plateau
Credit: Laura Crossey

The Himalayan Mountains and the Tibetan Plateau, the largest and highest geologic structures in the world, started forming some 50 million years ago through the crashing and colliding of the Asian and Indian continental plates. The Tibetan Plateau is a region about twice the elevation of the Colorado Plateau that was uplifted during the collision of the Indian and the Asian continental plates that is forming the Himalayan Mountains. Together they form the planet’s highest elevation region and an archetypal example of the processes of continent-continent plate collision.

Despite the importance of these formations, which influence the global climate through atmospheric circulation and seasonal monsoons, experts have proposed contradicting theories about how tectonic plates below the surface created the iconic behemoths. Using geochemical data gathered over nearly a decade, from 225 hot springs, scientists have now mapped the subsurface boundary between the Indian and Asian continental plates.

The paper, Limited underthrusting of India below Tibet: 3He/4He analysis of thermal springs locates the mantle suture in continental collision, was published recently in the Proceedings of the National Academy of Sciences. The findings have implications for geothermal and mineral resources and may help solve some of the contradicting theories.

“Plate collisions take place when one plate converges with another, and one subducts beneath the other,” said University of New Mexico Department of Earth and Planetary Sciences (E&PS) Professor Laura Crossey, one of the paper’s authors, who along with Professor Karl Karlstrom, joined an international team to conduct the research. “The rates seem slow by our standards, just several cm per year, for example, but over geologic time of tens of millions of years, the forces are incredible, the crust gets thickened, deformed like taffy, and uplifted, and the results are the spectacular mountain belts that rim many continents.” 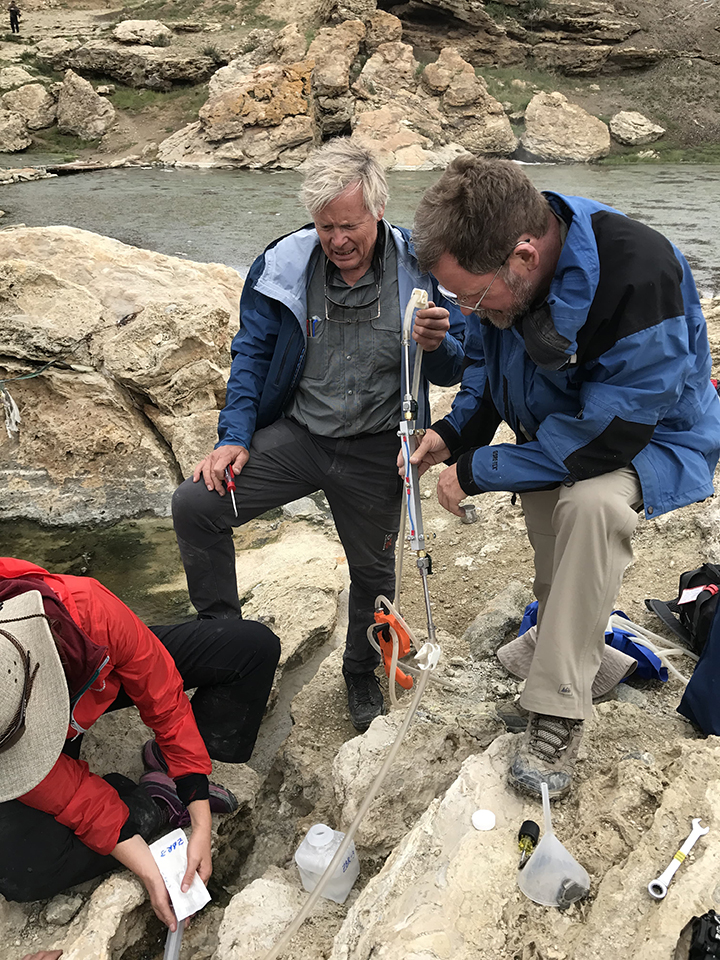 Simon Klemperer holds the gas sampling device, while UNM graduate student Carmen Winn holds the funnel intake in the spring vent below. The geothermal waters flow in a small channel beneath UNM Professor Karl Karlstrom (center) into the river behind the team.

“Additionally, these forces also generate some of the most powerful and deadly earthquakes on Earth. Understanding the detailed nature of the colliding plates can help us better prepare and plan for earthquakes. These mountain belts contain the deformed edges of both plates and a suture somewhere in the center that marks where they initially collided. Geologic mapping can identify the suture at the surface, but the subsurface processes of subduction can often be studied remotely by geophysics.”

In oceanic subduction, material in the subsurface is recycled into the Earth’s mantle when the cooler, heavier plate dives under a continental plate and sinks. The process occurs in zones like the Ring of Fire, which is known for frequent earthquakes and active volcanoes.

In a continental collision, researchers have hypothesized that subduction of ocean crust dragged the two continents closer together until they collided, closing up the subduction zone for mountain building to occur. This evidence of the continental boundary below Tibet introduces the possibility that the continental crust is releasing fluids and melting – just as it would happen in oceanic subduction.

For the Himalayan collision, the Yarlung-Zangbo suture extends roughly east-west for > 1000 km across southern Tibet. Its deep structure has been studied by geophysical experiments, but it is still debated how far beneath Asia the Indian plate extends. Does the Indian Plate subduct at a steep angle back into the mantle, or does it scrape along the base of Asia at a low angle for great distances inboard of the suture?

The hypothesis of the study was that the northern extent of subduction of the Indian plate under Asia, the line across which it peels away and drops into the mantle, might be marked at Earth's Surface by the appearance of mantle-derived 3He in springs and groundwater in Tibet. Scientists call this the “mantle suture” because it marks the location of the collisional boundary at great depth.

“New techniques can provide new answers,” said Crossey. “Helium, the most diffusible element in the solar system, has two isotopes: one (4He) forms in the crust due to radioactive decay and another far scarcer form (3He) that was left from initial formation of the planet and is still diffusing out of the deep Earth.”

Crossey and Karlstrom joined an international team of scientists including Simon Klemperer at Stanford University, Zhao Ping at the Chinese National Academy of Sciences, and Thomas Darrah at The Ohio State University, and their students, on the collaborative project that included in part driving four-wheel-drive vehicles for thousands of kilometers across a huge region of Tibet to sample hundreds of hot springs, some boiling.

“Some of the springs were previously unknown to science, but local Tibetans knew where they were and we usually found them surrounded by Tibetan prayer flags,” said Crossey. “The sampling process included collecting gas from fumaroles in copper tubes to keep the helium gas signature from diffusing out; gas analyses were done at Ohio State, and water geochemical analyses were done at UNM.

The results were spectacular. Scientists were able to define a 1,000 kilometer long East-West boundary in southern Tibet that extends from longitude 80 to 92.

“South of this boundary, on the Himalayan side, there is no detectable trace of mantle-derived helium; it just can’t diffuse up through the world's thickest crust where both the Indian and Asian plates are underneath,” explained Crossey. “But north of this boundary, the springs contain mantle-derived helium indicating that the Indian plate has started to drop away from the base of the Asian plate. This boundary follows the Yarlung-Zangbo suture in many places indicating that the Indian plate is subducting rather than being underthrust large distance and underplated far beneath Asia. However, in the eastern end, the Indian plate is being torn and fragmented by the collision process.”

Geochemistry has added greatly to understanding a problem that geophysics had not fully solved, and the paper shows how the interdisciplinary datasets are better than either one alone to resolve this aspect of plate tectonic processes. 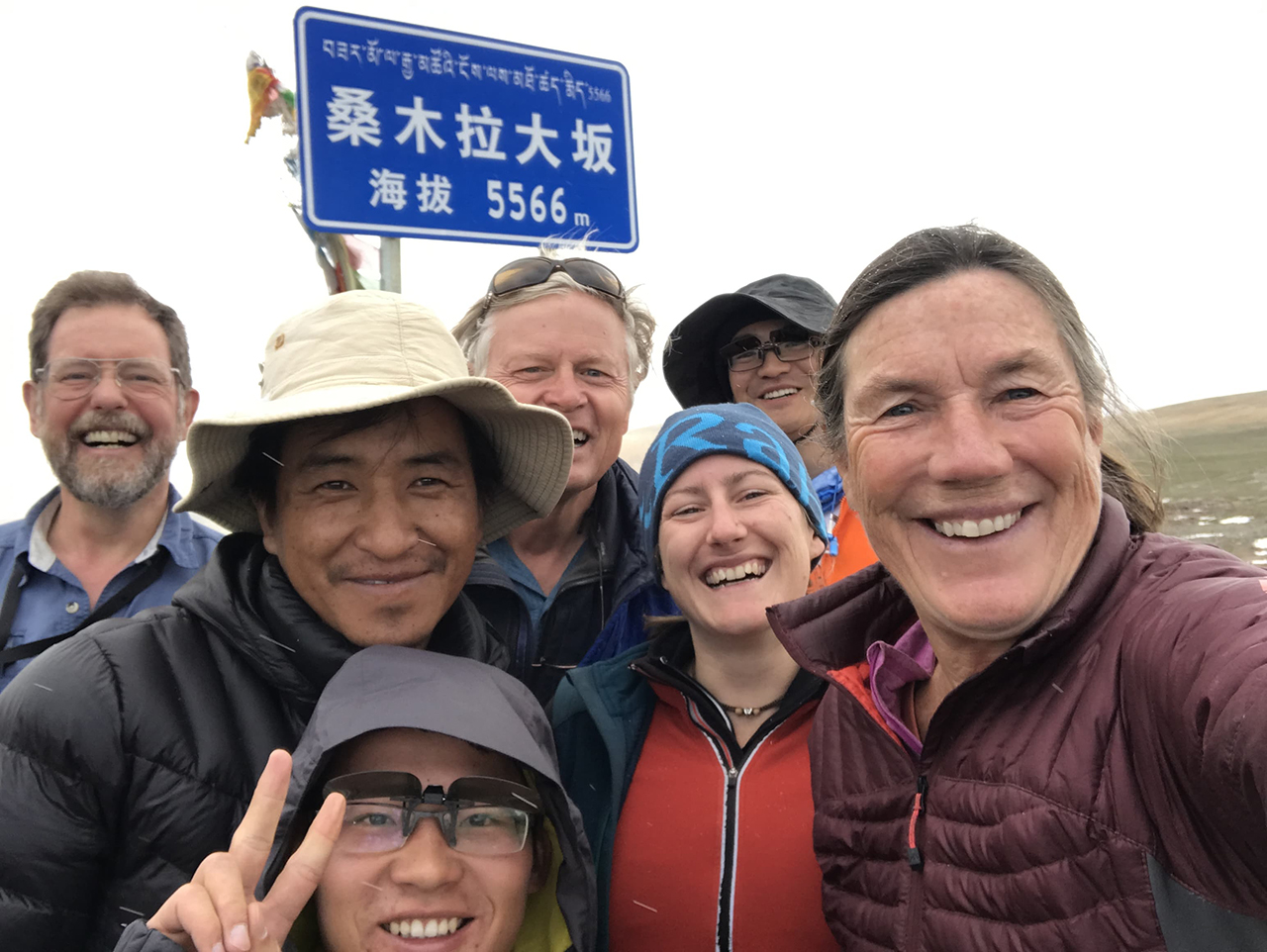 Tibet! The interdisciplinary team from UNM, Stanford and Chinese Academy of Sciences, Beijing, at a pass summit.

There are some analogies to the Colorado Plateau where Crossey and Karlstrom had previously conducted a continental helium study.

“Tibet is twice as high, but the Colorado Plateau is also a huge region that was uplifted by plate convergence—in this case an oceanic plate collided with the North American continental plate and uplifted the Colorado Plateau in the past 70 million years,” said Karlstrom. “In our case, the surface suture is in California and the mantle suture is beneath New Mexico and may have led to formation of the Rio Grande rift. In both cases, the helium isotope signature in surface groundwaters have provided important insights about the processes involved in plate tectonic collisions.”

The research was funded by NSF’s Tectonics program with collaborative grants to UNM and Stanford, and the Chinese Academy of Sciences.