Dr. Henry C. Ellis, age 91, Distinguished Professor Emeritus and former chair of The University of New Mexico's Department of Psychology, died peacefully surrounded by family on Thursday, July 4, 2019. He was preceded in death by Florence, his beloved wife of 58 years, and is survived by his three children, their spouses, seven grandchildren, and one great-grandchild. 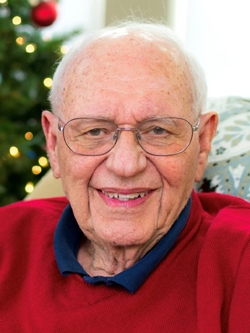 Ellis married his wife, Florence, in 1957 and they moved to Albuquerque, where he began his career with the Psychology Department at UNM. Ellis worked as an active researcher and psychology professor at UNM for more than 50 years, serving as Department Chairman of from 1972 to 1984.

A visionary in the field, Ellis was known for starting the department’s honors program in 1959 and the department’s clinic in 1982. He also worked hard to bring a research emphasis to the clinical program, and he also strengthened the experimental program by adding cognitive faculty.

"Henry Ellis was one of the most important figures in the history of the UNM Department of Psychology," said Professor Emeritus Harold Delaney, who was hired by Ellis in 1975 when he was chairing the search committee for the assistant professor position. "Spending his entire 37 year career at UNM (1957-1994), Ellis was dedicated to both the Department of Psychology and to the University."

Ellis had assumed the position of chair of the department in the wake of Frank Logan’s stepping down from the role. "Given his new administrative responsibilities, Henry asked me to take over the first year graduate course in Design of Experiments which he had been teaching, which I did and continued teaching the course for the next 40 years," said Delaney. "During his nine years as department chair (1975-1984), Ellis hired a number of faculty, working to strengthen the clinical program and also establishing the psychobiology area which grew to become one of the strengths of the department."

His research interests included cognitive psychology, including memory, cognition and emotions, emotion and thought processes, false memory, eyewitness identification, and psychology and the law. He had more than 120 publications, with 10 books among them, to his credit. Ellis eventually retired at the end of the 1993-1994 academic year when Delaney was serving as acting chair of the department.

"One of his legacies at UNM was founding the Psychology Honors program, a two-year program for selected undergraduate majors," said Delaney. "Psychology Honors is the oldest departmental honors program at UNM and has produced more than 400 honors graduates, many of whom have gone on to have distinguished careers including former UNM President Bob Frank. Henry took part in the 50-year jubilee celebration of our departmental honors program in 2015, and spoke at the event along with Frank. Personally, Henry was energetic and upbeat. He maintained his optimistic outlook to the end of his life. He was dedicated to his family and to our university, and will be greatly missed."

"Henry was a complex person," added UNM Professor Emeritus John Gluck, who worked alongside Ellis for years. "He was a creative teacher and an ambitious researcher concerned with the influence of cognition on human learning and memory.  As a department chair he actively supported the expansion of graduate clinical education and helped to recruit a strong faculty and cadre of graduate students. On a personal level, Henry's devotion to his wife Florence and his children was easily recognized and influential to others."

Ellis and his wife Florence moved to Four Hills Village in 1997 where they enjoyed many activities in the community. They especially enjoyed travel, and together visited 80 countries in Europe, Asia, South America, Australia and North Africa. In later years, they enjoyed cruising, which allowed them to see many exotic regions of the world. Most of all, Ellis loved his family and friends, and frequently entertained company in his home.

Ellis was born on Sunday, Oct. 23, 1927 in New Bern, N.C. His family later moved to Norfolk, Va., where he spent his childhood. He served in the United States Air Force as a medical laboratory technician from 1946 through 1947. He then went on to earn multiple degrees, including his Ph.D. in Experimental/Cognitive Psychology from Washington University in St. Louis in 1958.

In lieu of flowers, donations in the name of Henry Ellis may be made to UNM Research Enhancement for Faculty Projects in Psychology.