Sonya Romero-Smith honored as Dual Language Teacher of the Year
By Katie Williams April 14, 2016
Categories: Inside UNM College of Education and Human Sciences

She’s no stranger to the national spotlight. If fact, last year Sonya Romero-Smith was surprised and honored by talk show host Ellen for her compassionate work as a kindergarten teacher at Lew Wallace Elementary School. Known for her big-heart approach to helping underprivileged-students, Romero-Smith is now being recognized for her teaching excellence.

During the 2016 NABE Conference held in Chicago, Romero-Smith was honored as the José Martí Foundation—NABE 2016 Dual Language Teacher of the Year for her outstanding work as a bilingual education practitioner.

“I became a teacher because I was inspired by a teacher,” said Romero-Smith. “That teacher was my grandfather who was an educator for almost 40 years. He was the one who taught me to embrace my beautiful language, my culture, and my heritage. To be honored by such an incredible community of fellow bilingual educators, as well as being associated with the outstanding work that the José Martí Foundation supports—it’s like coming full circle with the hope I began with as a new teacher.”

In partnership with the National Association for Bilingual Education (NABE), the José Martí Foundation recognizes individuals who have made a difference in the lives of English Language Learners and bilingual students. 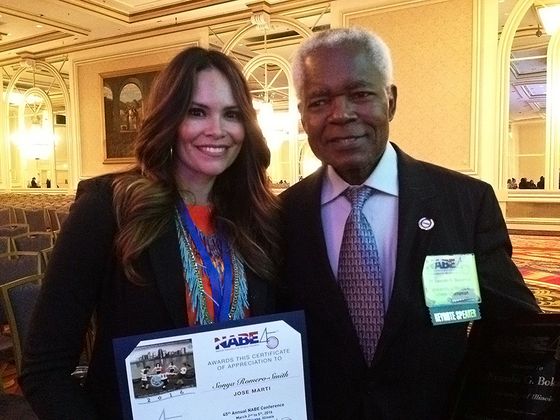 After receiving her teaching excellence award, Sonya Romero-Smith posed with keynote speaker Eyamba Bokamba at the 2016 NABE Conference in Chicago.

Romero-Smith received a bachelor’s and master’s degree from The University of New Mexico. Now pursuing her Ph.D. at her alma mater, her work with the College of Education is focused on young children’s literacy and the influences of poverty.

“Ms. Romero is a dedicated, intelligent, and articulate beginning student in our doctoral program,” said Professor Richard Meyer. “Faculty have already initiated some work with her and are thrilled that she’s part of our program. We know she will continue to make important contributions to the quality of life for children in our state and beyond.”

As an an educator, advocate, mother, and foster mother, Romero-Smith is aptly working in her doctoral program.

“I am part of a profession that has the ability to tap into the wonders and curiosities of children and, for me, returning to school has had that same effect,” she says. “I know that my work here at UNM will continue my advocacy for my students, my community, my colleagues and my profession.”