What is about a foot long, has four wheels, can go 40 miles an hour, is equipped with lasers, and can navigate around a course autonomously?

The answer is a student-built vehicle designed to one-tenth scale of a Formula 1 racecar.

Students from The University of New Mexico Department of Electrical and Computer Engineering have been working since about mid-August on such a car that will compete in the F1/10 Autonomous Racing Competition that will be held during Embedded Systems Week in Pittsburgh, Pa., from Oct. 2-7.

Only a handful of other universities will be in the competition. This is the first year that UNM will compete.

The team was provided with guidelines and a starter kit, but otherwise, the team is on their own to figure out how to build the car to meet the race objectives of going around the racetrack as fast as possible autonomously without crashing, said team member and electrical engineering sophomore Carolina Gomez.

Components on the car include a battery, a inertial measurement unit, and a rangefinder. The team must use the software and their programming skills to figure out how to map the course using lasers that bounce off walls and objects, then how to program the car to “remember” the course so it can run successfully on its own. 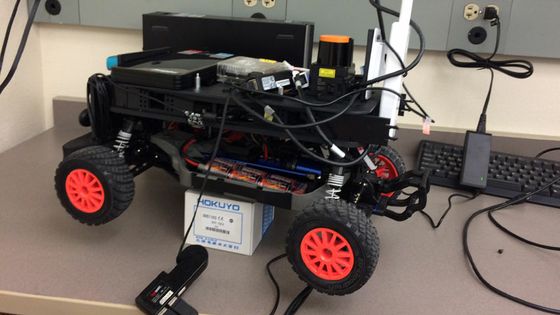 Rafael Fierro, a professor in the Department of Electrical and Computer Engineering, said he was able to get UNM involved in the competition because of his work with Sandia National Laboratories and UNM student Greg Brunson, a junior in the department who works in robotics part-time at Sandia.

“Greg needed to get used to using the Robotic Operating System software for a project, and this competition happened to use this software, so I thought this would be a great opportunity and great timing,” Fierro said.

Fierro manages the Multi-Agent, Robotics, and Heterogeneous Systems (MARHES) lab in the Department of Electrical and Computer Engineering, which is an interdisciplinary laboratory dedicated to research and education in hybrid and embedded systems and robotics. The vehicle is being built in the lab and tested out in the hallways of the Electrical Engineering Building.

Even for seasoned programmers like Jonathan West, a Ph.D. student in electrical engineering who is focusing on robotics, this contest has been a challenge. He and Brunson have been the key team members who have had to figure out the software and how to effectively map a course so that the car can be programmed to run the course by itself.

“I knew about ROS (Robot Operating System), but the mapping part was new to me, so it’s going to be a challenge,” he said.

Also on the team traveling to Pittsburgh is Rebecca Kreitinger, a sophomore studying computer engineering.

The project is being funded by Sandia National Laboratories, along with the Department of Electrical and Computer Engineering.