A student team from The University of New Mexico placed second in an international autonomous car racing competition.

The team, made up of students from the Department of Electrical and Computer Engineering, competed in the F1/10 Autonomous Racing Competition in Pittsburgh, Pa., earlier this month. They built a vehicle designed to one-tenth scale of a Formula 1 racecar.

The team was provided with guidelines and a starter kit, but otherwise, the team was on their own to figure out how to build the car to meet the race objectives of going around the racetrack as fast as possible autonomously without crashing.

Components on the car include a battery, an inertial measurement unit, and a rangefinder. The challenge was to use the software and their programming skills to figure out how to map the course using lasers that bounce off walls and objects, then how to program the car to “remember” the course so it can run successfully on its own.

Although the mapping part of the code didn’t work as the team hoped, they were able to quickly adjust their code to have it avoid a crash by detecting the walls and obstacles on each side.

The car was built in the Multi-Agent, Robotics, and Heterogeneous Systems (MARHES) lab in the Department of Electrical and Computer Engineering, which is an interdisciplinary laboratory dedicated to research and education in hybrid and embedded systems and robotics. The lab is managed by Rafael Fierro, a professor in the department.

The team was led by Greg Brunson, a junior in the department who works in robotics part-time at Sandia National Laboratories.  Brunson was the team’s primary software developer and he plans to apply the tools he learned from the competition to his future work at the labs. Also leading the team was Jonathan West, a Ph.D. student in electrical engineering who provided guidance on the software.

For the two youngest members of the team, witnessing engineering in practice was a valuable experience.

“With engineering, it’s about collaboration,” said Rebecca Kreitinger, a sophomore studying electrical engineering. “We got to see how engineering works in the real world, which we don’t get to see much in our classes. All that math we are learning actually has a purpose!” 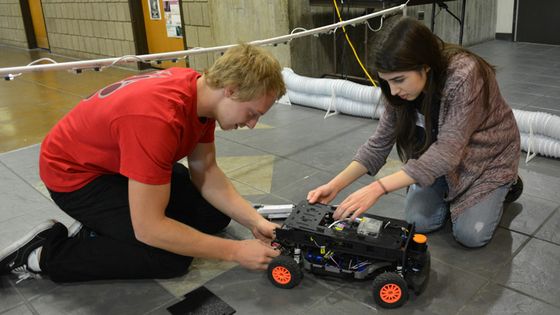 ECE students Greg Brunson and Carolina Gomez work on the autonomous vehicle during competition in Pittsburgh.

Carolina Gomez, also a sophomore in electrical engineering, said she liked the fact the racing community was so supportive, with other teams willing to help or offer suggestions.

“It was nice to see how everyone was sharing, and it was helpful to see how other teams put their code together,” she said. “We were able to learn a lot from that.”

Kreitinger and Gomez said the other teams appreciated the fact that the UNM team brought some diversity in the mix. They were the youngest team members, as most competitors were graduate students. And they were two of only three women in the competition.

The project was funded by Sandia National Laboratories, along with the Department of Electrical and Computer Engineering.