He is one of just five individuals chosen by the SAH Board of Directors. The honor recognizes Mead’s lifetime of significant contributions to the field of architectural history, particularly in the areas of scholarship, service to the Society and stewardship of the built environment. Mead and the other 2017 Fellows will be inducted at the SAH Annual International Conference in Glasgow, Scotland this summer.

Mead is the Emeritus Regents’ Professor of Architecture and Professor of Art History at the University of New Mexico (UNM), where he had a distinguished 33-year tenure. From 1986 to 2001, Mead was an adjunct curator at The University of New Mexico Art Museum and from 1995 to 2003 he held a joint faculty appointment in the School of Architecture and Planning and the College of Fine Arts.

From 2004 to 2009 Mead served as the Dean of the College of Fine Arts at UNM Mexico where, under his direction, a new Interdisciplinary Film and Digital Media Program was established. Upon his retirement from teaching in 2013, 25 former students at UNM published “On Architecture”, a limited edition book honoring his influence on them and his prestigious career.

The author and editor of numerous books, Mead was awarded the 2015 Alice Davis Hitchcock Award from the Society of Architectural Historians for “Making Modern Paris: Victor Baltard’s Central Markets and the Urban Practice of Architecture” (Pennsylvania State University Press, 2012). The book was featured in conjunction with a major exhibition on Victor Baltard at the Musée d'Orsay in Paris.

In addition, for the past three years Mead has served as an editor and contributor to the New Mexico building histories and essays in SAH Archipedia, SAH’s digital encyclopedia of American architecture. 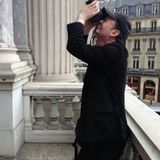 A Life Member of SAH, Mead has played many roles in the Society. In 1992 he was the Local Chair for the SAH annual meeting in Albuquerque and he served on the SAH Board from 1994 to 1996. During his tenure on the Board, Mead was elected as an officer of SAH from 1996 to 2002. He organized study tours to explore Modern and Colonial architecture in Brazil, the ancient indigenous architecture of the Four Corners region in the U.S. and the architecture of Bruce Goff in Oklahoma. In 1999 and 2000 Mead chaired two successful SAH annual conferences in Houston, Texas and Coral Gables, Florida.

When Mead served as president of SAH from 2000 to 2002, he looked to the future internationalization of the organization and established several new fellowships designed to bring international scholars to the SAH annual conference. Mead is currently researching a book on Japanese architecture called Hypospace.