The University of New Mexico hosts its annual Fall Graduate and Undergraduate Commencement ceremonies Dec. 15 and 16 at the WisePies Arena aka The Pit.

They keynote speaker for the Graduate ceremony is former New Mexico State Treasurer, James B. Lewis. Lewis served as the 24th treasurer under former Gov. Toney Anaya, and served again as the 29th treasurer under Gov. Susana Martinez.

The Undergraduate Commencement keynote speaker is Pamela Agoyo, director of American Indian Student Services and special assistant to the President for American Indian Affairs at UNM. 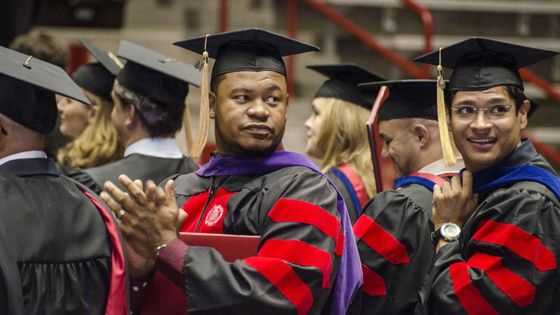 In addition to the degrees being conferred, the Presidential Award of Distinction will be awarded to recipients Dr. Larry Sklar and Terry Laudick from Frank at the Dec. 16 Undergraduate Commencement ceremony. Sklar is a Regents’ and Distinguished Professor of Pathology, who has more than 400 publications and patents in biotechnology, and Laudick is currently the President/CEO of Nusenda Credit Union.

Both ceremonies are campus-wide graduation ceremonies, including degrees from all schools, colleges, and degree programs. Each candidate will walk across the stage and be recognized individually for their accomplishments. Doctoral and terminal master’s (Master of Fine Arts) will be hooded at the ceremony.