May 03, 2016
Categories: Inside UNM Branch Campuses

University of New Mexico Associate Professor John Zimmerman will be taking his expertise in ceramic sculpture and his interest in landscapes and geological history to the Fuping Pottery Art Village in the Shaanxi Province of China as part of an international engagement project funded by the UNM Research Allocation Committee (RAC).

Zimmerman is the first branch campus faculty member to have been awarded a RAC grant. He is utilizing the funding to conceptualize, build, dry, glaze and fire original works of art which will be exhibited, in addition to three of his previous sculptures that are currently on display, at the on-site museum in the Art Village.

On a previous trip to China, Zimmerman was commissioned by administrators of the Fuping Pottery Art Village to create an 8’ x 10’ sculpture that is currently displayed on the outside grounds of the Village.

"I want to be that source of inspiration for students that is different than what they are used to."

In reflecting on the process of acquiring the RAC funding, John noted that his application clearly detailed how his work will benefit the University.

“Awards are contingent on doing something different,” said Zimmerman. “Many of my previous objects were based on a stratified style. Some of my newer pieces use mountains, newer colors and pixelated stratifications. I enjoy taking something new and making it look old.”

In one of Zimmerman’s recent exhibits “Stratified Series,” he took items that exemplify current pop culture and combined them with his interest in geological timeframes. By taking everyday items such as traffic cones, cinder blocks, and fire hydrants and encasing them in multicolored rings of ceramic he created an exhibit that combined the landscape of the local area, historical depiction of changing geological eras and the bringing together of earth and everyday society. 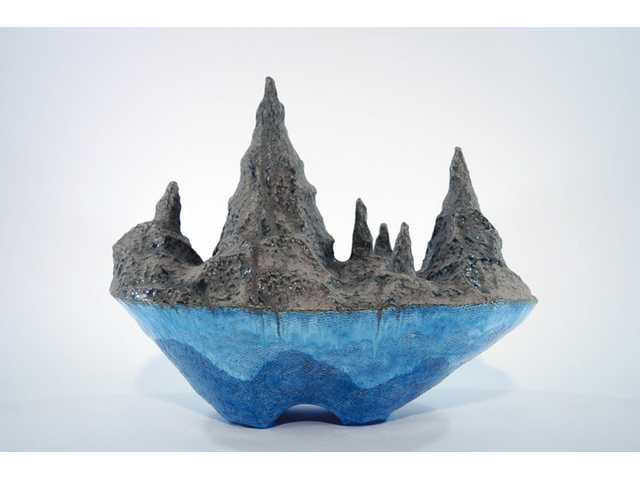 Branded by the frequent use of the color blue, “Scapes” hints at the presence of water in the once-arid desert ecology. While the “Stratified Series” produced objects which were more life-sized, “Scapes” exhibits objects that are extremely large and symbolic of mountains and rock formations.

Zimmerman recognizes the benefits of his travel as it relates to his students at UNM-Gallup. He hopes to either take students to China or bring Chinese students to New Mexico as part of an international exchange.

“When I was a student, I was inspired by faculty doing something new,” he said. “I want to be that source of inspiration for students that is different than what they are used to.”