The University of New Mexico established “SMART,” or Sexual Misconduct and Assault Response Team, as front line campus responders for a range of sex crimes. The team is an evolution of SART, which responded exclusively to sexual assaults.

One way SMART puts victims first is a “warm handoff.” “We carry the victim through the process. We don’t just give them a name and phone number of someone to contact. We take them to meet the person. We give them the Rape Crisis phone number, but if they need us to, we call and get them on the wait list for counseling,” she said. Little added that they seek to provide the kind of counseling best suited to the victim’s wants and needs. “Some want faith-based, others want cognitive behavior counseling. It’s up to them,” she said.

Other members of the team come from on and off campus and include: Student Health and Counseling (SHAC), Counseling Assistance Resource Center (CARS), Dean of Students, Office of Equal Employment Opportunity (OEO), the UNM Police Department, Sexual Assault Nurse Examiner (SANE) and the Rape Crisis Center.

“We – all of higher education – have until July 2015 to get into compliance with the new rules. It involves extensive requirements for training and reporting.” – Summer Little

Confidential informants
Little said that some entities on campus offer confidential support, others, however, are required to report any sexual misconduct that comes to their attention. “If a student went to the Dean of Students office first, with no intent to start an investigation, the student may not know that Dean of Students is required to turn the information over to OEO, which makes a determination whether or not an investigation is warranted,” she said. The reporting party can participate or not in the investigation, but has no final say in whether or not an investigation takes place, she said.

Those who can serve as confidential informants are SANE, the Rape Crisis Center, SHAC, CARS and the Women’s Resource Center. “Anyone else must report to OEO.” The report goes to both OEO and to the UNM Clery Coordinator, who is currently, Deputy Chief of Police Christine Chester. “All staff and faculty will then meet their obligation,” Little said. 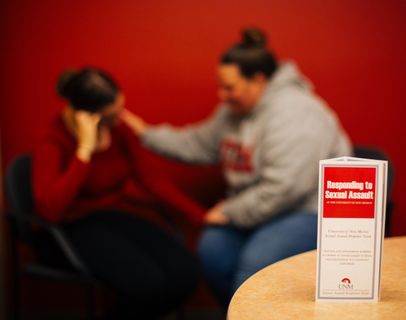 Some SMART members can serve as confidential informants and help victims get the help they want and need.

Health providers and counselors are not required to report, however, they must be serving in that role when they learn of the sexual misconduct, otherwise they must report as well, Little said.

Through the Women’s Resource Center, the victim is able to find out what process will occur with OEO, UNMPD and SANE, where they can also have an exam. “Individuals then have the information and the support system to make decisions about how they want to proceed,” she said.

UNM statistics
SART established protocols in May 2013, and started taking reports that fall. Because they have a system in place, Little said the number of incidents reported will go up. “We produced 24 reports the first year, after adjusting for duplication,” she said.

That first year demonstrated that the majority of the victims were between 17 and 19 years of age, 19 incidents were sexual assaults, six were sexual abuse and one indecent exposure was reported. “New Mexico statute defines ‘sexual abuse’ as sexual contact that doesn’t include penetration of any body cavity,” Little explained. Sexual assault does include penetration. “The Violence Against Women Act (VAWA) more broadly defines about as unwanted touching through assault,” Little said.

She added that this is covered under the Campus Sexual Violence Elimination Act (SaVE Act) is legislation that updates the responsibility colleges and universities have to assist victims of sex crimes. Among the ways schools can address a victim’s needs is to change academic, living, transportation or working situations to avoid a hostile environment. Also, providing counseling, medical, mental health, legal assistance and advocacy.

Providing victim support
“We also work through the Dean of Students office if a student needs an extension for coursework. We are working to get instructors to the point where they understand and accommodate a student in this situation rather than making it impossible for them to remain in school. That serves no one,” Little said.

“We – all of higher education – have until July 2015 to get into compliance with the new rules. It involves extensive requirements for training and reporting. Until July, institutions must operate in good faith,” Little said. SMART is a targeted component. It pulls together people who can do something – investigate or provide services. “Most members wear more than one hat,” she added.

Rape Crisis and WRC advocates are also available to go with students to OEO or any other meetings, sit with them through the interview, provide support and clarification, as needed, Little said.

SANE’s main office is downtown. “If a student needs a ride, UNMPD is willing to drive them down there without the officer being required to make a report,” Little said.

Law vs. policy
Little notes that not all sex crimes end up being prosecuted. “Even with evidence, the District Attorney makes a determination about whether or not the case is winnable.”

There’s law and there’s also policy when it comes to criminal behavior at UNM. “Rape is both a crime and a civil rights violation. Under the rule of law, the state can take away one’s life, liberty and property. For UNM, Student Code of Conduct has a different standard of evidence, as explained in Title IX. The standard is a preponderance of the evidence, or 51 percent. It often comes down to consent. The investigation hinges on whether it is more likely than not that a policy violation occurred,” she said.

Little is also a member of the Bernalillo County Multi-Disciplinary Team to collaborate with community partners who are engaged to aid victims of sex-based crimes. And that’s smart.