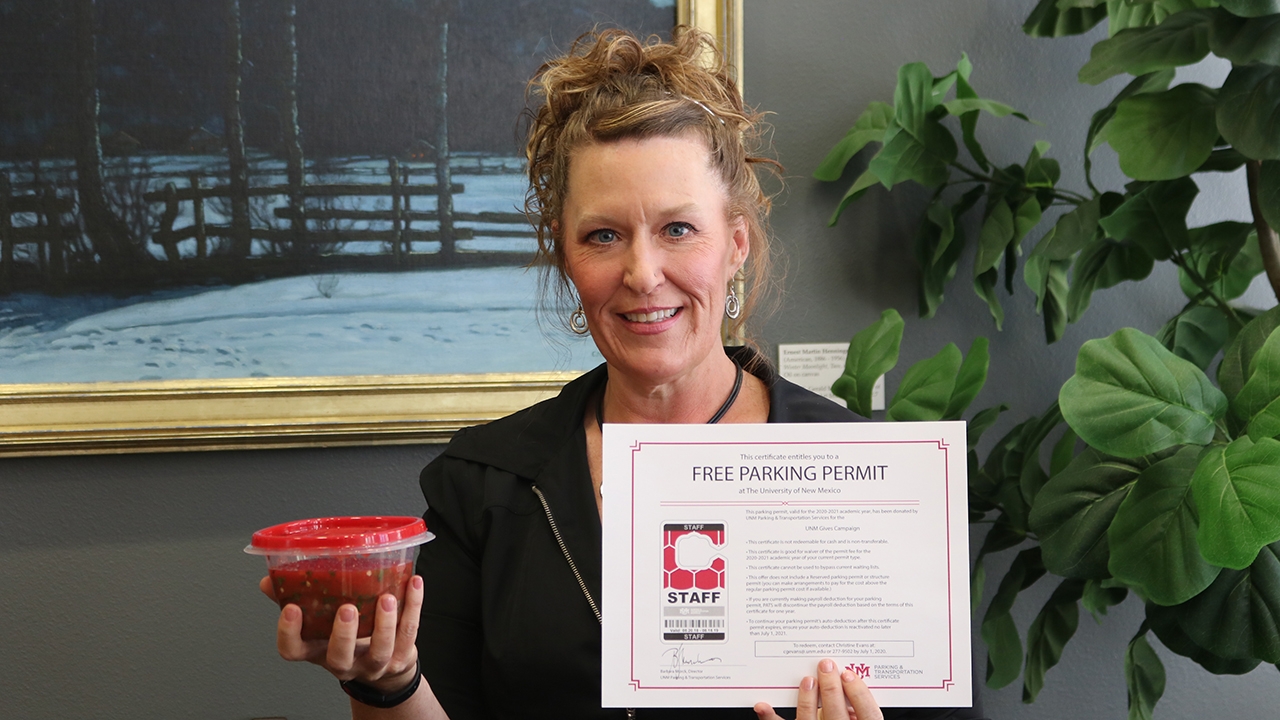 Shannon Siderius says fresh peppers were the key to her winning salsa recipe.

The winner of the inaugural Salsa Showdown, a tasty competition that kicked off the 2019 UNM Gives Campaign, is Shannon Siderius. She received a year of free parking courtesy of UNM Parking & Transportation.

“I was super thrilled to receive the call that I had won,” said Siderius, an administrator in the UNM Department of Mechanical Engineering. “I don’t typically win things, but when I do, I’m thrilled head over heels with excitement. I’m super excited to win!”

Ways to donate to the UNM Gives Campaign

A number of opportunities exist for interested individuals to donate to the UNM Gives campaign including:

For more information on the fundraising campaign and ways to give, visit UNM Gives.

Siderius said, without revealing her recipe, that fresh ingredients were an instrumental part of the winning recipe. “I would say the key is to use fresh from the farm peppers.”

She also gave credit to her department who supported her efforts including chair Dr. Yu-Lin Shen, and staff members Anna Mae Apodaca, Cindi Sanchez, Denisha Garcia, JJ Conn, and Kaydra Townsend, who contributed to the winning effort through their recruitment efforts of Salsa Showdown attendees to stop by and taste her salsa during the contest.

“I couldn’t have done it without my staff and support from my department chair,” said Siderius. “The staff came out to support and it actually turned out to be a team building exercise. Everyone took part in the competition and voted, and they also got other attendees to come by and test and vote for my salsa.”

As part of the contest, each entrant prepared one gallon of salsa or guacamole in a container. The winner was be determined by popular vote. The winning margin between first and second was razor thin with only one vote separating Siderius and second place winner Marlene Sanchez. Third place went to Tatiana Gallegos, who wasn’t far behind. Sanchez and Gallegos will each receive a UNM swag bag for their salsa-making efforts.

The Salsa Showdown, sponsored by the Office of the President, opened off this year’s UNM Give Campaign as anew twist to generate enthusiasm for the annual fundraising effort. More than 200 people attended the event and cast nearly 720 votes for the entries. Attendees were also able to donate to the UNM Gives campaign as part of the event.