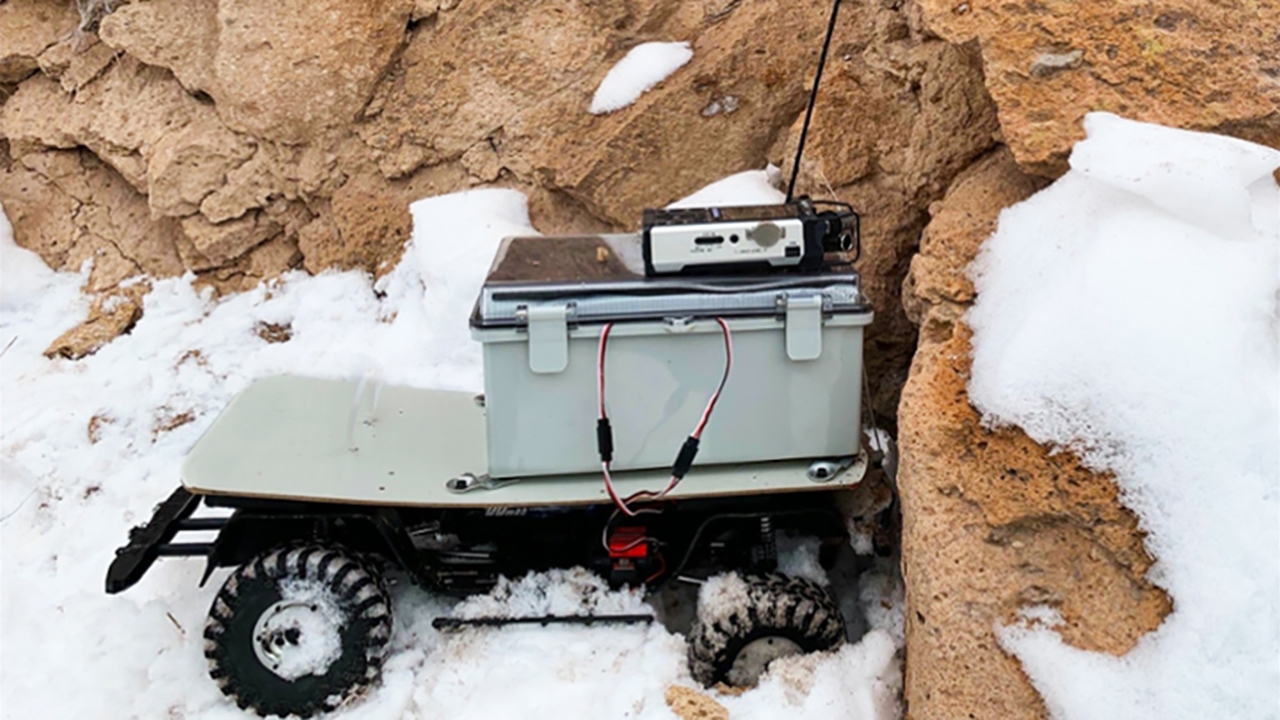 “We have created an automated system to decrease the risk and safety hazards for inspectors,” said recent Ph.D. graduate Roya Nasimi. “With Brutus, the inspectors can remotely collect their data and their results without approaching the structure they are inspecting,” she concludes.

To accomplish this, Brutus is constructed of a mechanized rock tapping device complete with microphone and sound collecting system all mounted on an RC car base. A software algorithm written by Nasimi is incorporated to analyze the sounds created when the tapping mechanism strikes the rocks. The algorithm then calculates where instabilities exist. By studying the algorithm’s output, inspectors can find rocks that are prone to falling and remove them, proactively reducing the risk of a future rockslide.

Nasimi, now a postdoctoral research associate at the University of Nebraska Lincoln, began working on this project in October 2020 as a Ph.D. candidate at UNM.

“I started with a simple algorithm to classify different types of material and the sounds collected from them,” Nasimi explained. She then conducted laboratory tests on rock samples to discover the different characteristics of the sounds created by intact rocks versus those created by rocks with cracks. These test results were used to train and test her software algorithm.

“Technology is taking over, and we are trying to automate inspections. What we have developed will help in that way,” Nasimi said.

“Brutus is remote controlled, like what is used for RC planes. We programmed the controls for the car itself to move with joysticks, then we programmed the switch to have Brutus hit stuff,” Murillo explained.

The tapping data is stored on a memory card on the RC vehicle. After the testing is complete, the data is taken to the lab for further analysis. Murillo is working to automate this process even further. In the future he plans to have Brutus transmit the data wirelessly to the inspectors at the site. He is also working on adding internal backup systems for the data.

Brutus has been successfully deployed in several field tests. One test was along a roadside in Tijeras, N.M. that was prone to rockfall. In the Tijeras test they “were able to classify, or distinguish, between the different regions [Brutus] hit on the roadside,” Nasimi said. In another test, the team worked with the New Mexico Department of Transportation (NMDOT) to inspect a site near White Rock, N.M.

“When Josh and I were out there it was quite the operation... We had to have road crews out there watching traffic for us while we were nearby,” Hanson explained. He asserts that the ability to deploy Brutus with one or two people will eliminate the need to close roads because Brutus is a lot smaller than a person.

“The increased safety of being able to send a robot out there to tap cliff sides along roads … is a massive increase in safety,” Hanson emphasized.

In a similar test, Brutus was deployed at Cochiti Lake, N.M. Here, in addition to the tap tests, the UNM team was splash-testing Brutus for future projects. They collaborated with the National Science Foundation Natural Hazards Engineering Research Infrastructure (NHERI) Natural Hazards Reconnaissance (RAPID) Facility headquartered at the University of Washington (UW) to make Brutus waterborne to perform the tests.

“They [UW] had a big RC boat platform that we put Brutus on. The Washington guys controlled the boat and we controlled Brutus remotely and made sure he was hitting where he was supposed to hit. Jack, Solomon, and I all worked together to waterproof and make the system … modular. We put it on the boat and on Day One of testing we found that a lot of water had been splashing, so Jack and I went back at it and actually waterproofed it,” Murillo recalled.

As well as waterproofing, other modifications of Brutus are under way to enable it to be deployed by regional inspectors to tap piers and underwater bridge pylons. Murillo explained that “What we are working on now is doing aquatic rock fall … [and] pier monitoring where we can tap the side of the pier to see if it is about to collapse and check the security of it. Then there is another project I am working on where we might see about going underwater and using Brutus in that way … for bridge pylons and such.”

Murillo, who is working on his Master’s degree in Global and National Security at UNM, hopes to follow up on this aspect of Brutus for his Ph.D.

“The current Brutus model is splashproof. It is not submergible, but it can take a licking … Jack and I went up to White Rock to drive Brutus in the snow and it was fine with the snow. But I am working on a submergible. We will have a lot more versions of Brutus,” Murillo grinned.

“I find this a very interesting project, I started this and now my teammates have been progressing this work using the same method with a different variation of the system and the hardware to be used on different types of structures, not just rock falls. In the future it would be interesting to create a climbing robot. Rock inspectors go up, so it would be really interesting to make a climbing robot. Perhaps this is [a possible] future scope of the project,” Nasimi said.

The Brutus system is gaining recognition as a tool to improve safety conditions for roadside inspectors and to aid in preventing rockfall situations before they happen. The project has resulted in two journal papers, one conference presentation, and several institutional and nationwide presentations including the Tran-SET (Transportation Consortium of South Central States) 2021 conference, the Mechanistic Machine Learning and Digital Twins for Computational Science, Engineering & Technology (MMLDT) conference in San Diego, and the 2022 Transportation Research Board conference in Washington D.C.

The SMILab, under the direction of Moreu, is housed in the UNM’s Center for Advanced Research Computing (CARC) building. Moreu, along with Dr. John Stormont, an expert on geotechnical and geomechanics in the Department of Civil Engineering at UNM, advised and oversaw the students working on the Brutus project. Nasimi wrote her algorithm and performed all lab experiments at CARC.  Brutus was designed and built inside the CARC building with involvement from Reserve Officers Training Corps (ROTC) cadets from the Office of Naval Research (ONR) cybersecurity training program.The UNM ROTC cybersecurity training program is led by Principal Investigator (PI) Moreu and Co-PI Dr. Francesco Sorrentino, Associate Professor of Mechanical Engineering at UNM.

Additional support for this project came from an ongoing cybersecurity effort for Structural Health Monitoring (SHM) of critical infrastructure funded by the New Mexico Consortium (NMC) and the Office of Naval Research (ONR).

Brutus was developed under the guidance of former SMILab staff researcher Marlan Ball. Ball coined the name Brutus, inspired by his interests in robotics and ancient history.

SMILab PhD students Xinxing Yuan and Mahsa Sanei assisted on the waterfront testing of Brutus in the UNM swimming pool and Cochiti Lake.

The first realization of Brutus was supported by the NMC and Los Alamos National Laboratory (LANL) in 2016 in collaboration with LANL Engineer Dr. David Mascarenas.