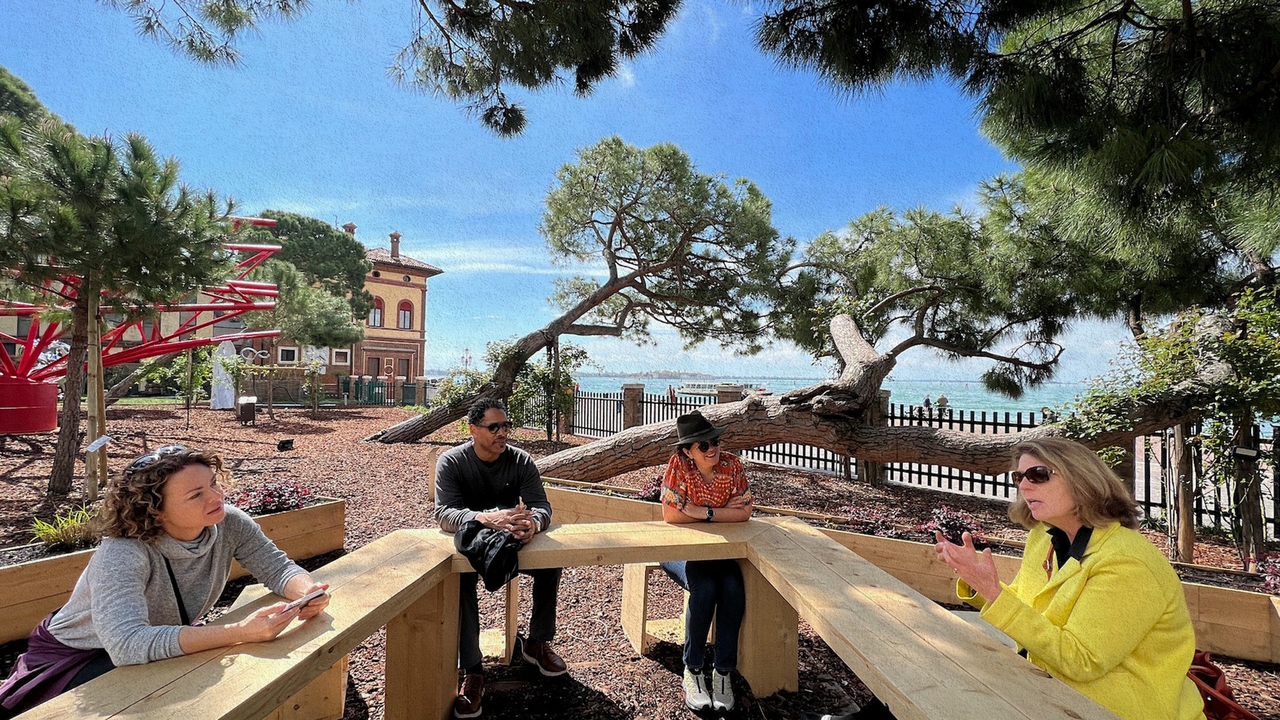 The University of New Mexico Center for Environmental Arts and Humanities is celebrating, and with good cause. They recently received an award for their successful project at the prestigious 2022 Venice Biennale Art exhibition Personal Structures, which was organized and hosted by the European Cultural Centre (ECC) in Venice, Italy. Personal Structures included 192 projects from 51 countries and was seen by more than 520,000 visitors.

The exhibition and award came soon after the center learned it had received a $500,000 grant from the Mellon Foundation for continued support of the center and its programs, including the Venice project. 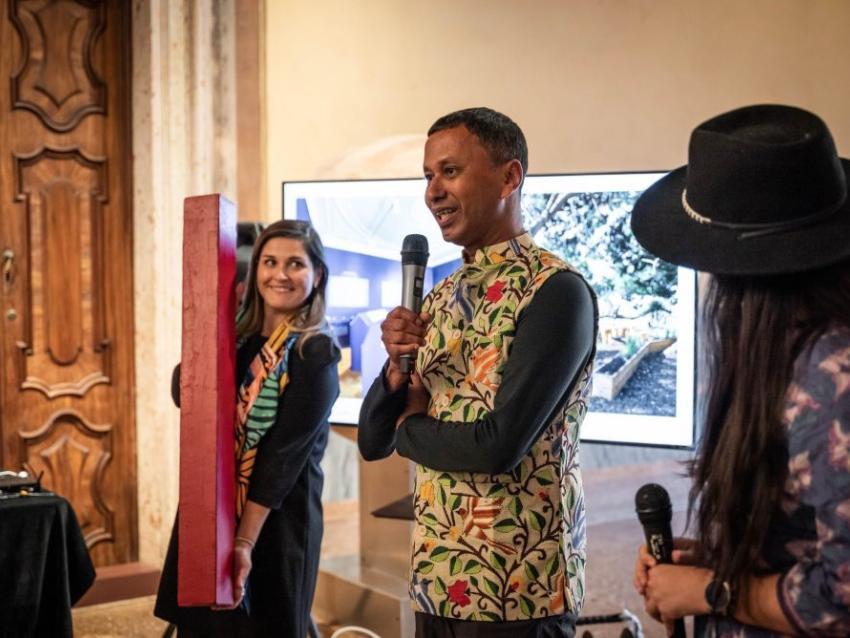 The UNM Venice Biennale project, a Library, a Classroom, and the World, co-produced with the Environmental Studies Department of Davidson College of North Carolina, received an award from the European Cultural Centre (ECC) to commemorate the closing of the exhibition and to honor the participants.

For the category University and Research Project, the award was presented to a Library, a Classroom, and the World for “having created a project which represents a successful attempt of involving the city of Venice with its culture, traditions and territory. A genuine proof of interaction and a smart application of art in the field of ecology.”

Curator and UNM professor of Art and Ecology Subhankar Banerjee accepted the award with co-curator Davidson professor of Latinx environmental visual art and culture scholar Jennifer Garcia Peacock on behalf of the multi-ethnicity, multi-generational team of nearly 20 artists and scholars who created the project.

“Our project was conceived and produced during a time of great despair when deaths, pain, suffering surrounded us,” Banerjee explained. “It wasn’t easy to work on the project when the Omicron wave was causing havoc across Europe and North America, when the Delta wave was claiming lives across India and the world. But we made a commitment to bring the project to completion—to offer something that would be beautiful, meaningful, hopeful and inspiring, that would help build bridges across nations and places, peoples and cultures, and across time. Our project was collaborative, not an individual effort, and it was deeply rooted in places, including Albuquerque, Davidson, and Venice.”

The UNM team included Art and Ecology MFA graduate Alexandria Zuniga de Dóchas and Art History Ph.D. student Jackson Larson. New Mexican Indigenous artist Jaune Quick-to-See Smith, along with the Las Cruces-born Chicano cartoonist and storyteller Zeke Peña, were also part of the team. Master printer Valpuri Remling from the Tamarind Institute assisted Smith, who turned 82 this year. Historian Finis Dunaway of Trent University in Canada served as a contributing scholar and editor-at-large, and the late David Mendez of Albuquerque who did the design for postcards and wall text. The team was headed by Banerjee, who was born in India and developed the project concept, served as director and co-curator, co-created the postcards, and co-designed the Classroom.

The team crafted the library in the historic Palazzo Bembo along the Grand Canal near the Rialto bridge. Displays included drawings, digital illustrations, photographs, poetry and extensive narrative and scholarly text. The outdoor classroom was set in the Marinaressa Gardens along the Venice Lagoon. With welcoming benches, lush plants, and a waterfront view, it became a popular destination for residents and visitors.

This project was supported by the UNM Office of the Vice President for Research (OVPR).

Banerjee noted that since the exhibition closed in November:

Jaune Quick-to-See Smith: Memory Map, Smith’s two-part folded book from a Library, a Classroom, and the Worldwill be presented at the Whitney Museum of American Art, New York.

In Venice, a greyscale version of Peña’s two-part panoramic drawing The River (Remix) was presented. A colorized version is included in the group exhibition Entre/Between on Latinx art at the Crystal Bridges Museum of American Art in Bentonville, Arkansas. In February, Peña is scheduled to give a talk on The River (Remix) at the Crystal Bridges Museum.

Garcia Peacock’s essay Zeke Peña: Illustrating Chicanx Environmental Justice Histories in the Rio Grande Watershed, which focuses on The River (Remix), is included in the anthology The Routledge Companion to Art and Activism in the Twenty-First Century.

Banerjee co-authored an article with Dunaway titled, Beyond Fortress Conservation: Postcards of Biodiversity and Justice, which is included in the January 2023 issue of the journal Environmental History, the world’s leading journal of environmental history and the journal of record for the field. The article is based on the postcards project introduced in Venice.

On January 27, 2023, Banerjee will give a talk The Garland Changes Everything: Religion, Ecology, and Justice in the Sundarban in the inaugural two-person (with poet Craig Santos Perez) webinar Sacred Lands, Sacred Ecologies: Poetic and Photographic Engagements of the Spring 2023 series Mass Extinction: Art, Ritual, Story, and the Sacred, part of the broader Religion, Ecology, and Expressive Culture Initiative at the Institute of Sacred Music, Yale.

With the three-year Mellon Foundation grant, which helped support the Venice project, the Center plans to continue current core support to students and faculty research, and creative and research programming, including: