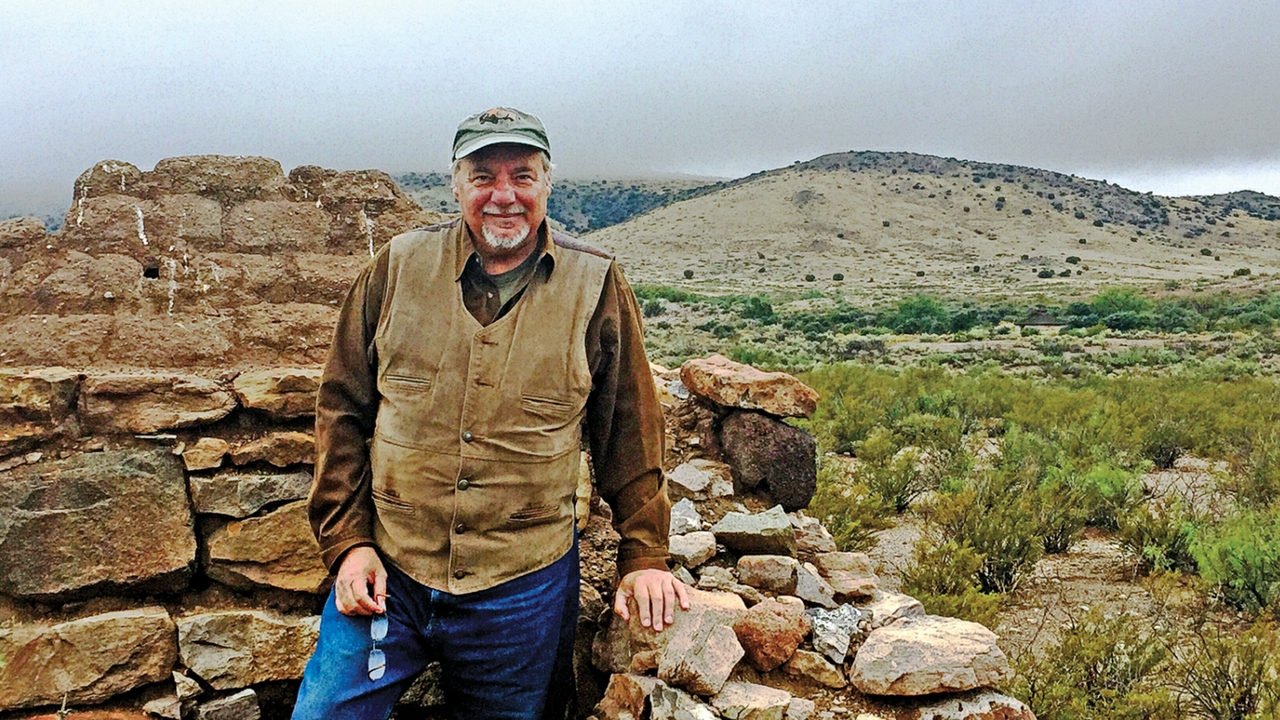 Distinguished Professor Paul Hutton from The University of New Mexico Department of History was recently presented with the True Westerner of the Year Award from True West magazine. Hutton is known for his work in the film and television industry and he has been the go-to expert for local media in stories involving historic New Mexico characters. 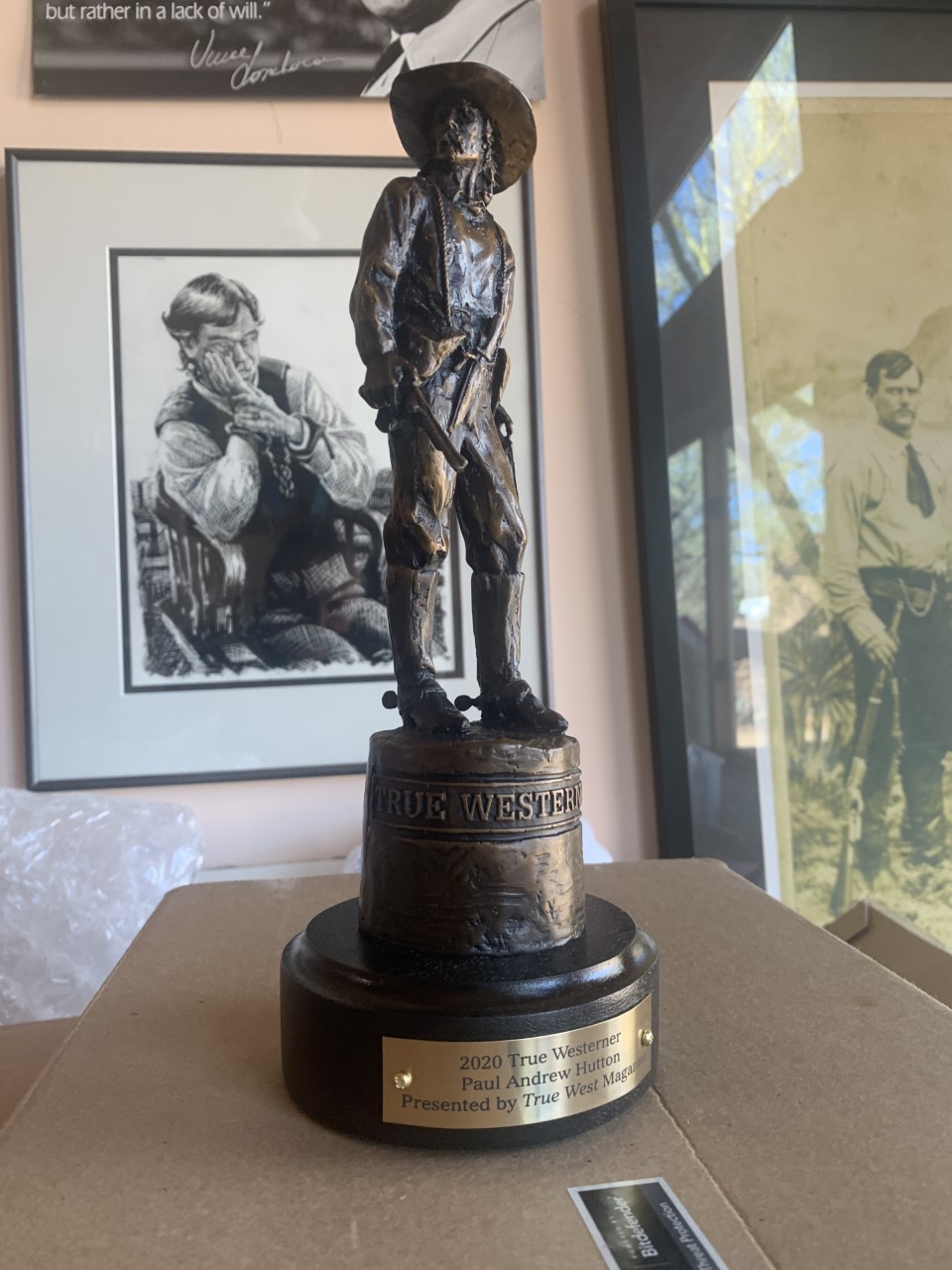 In an article about Hutton receiving the award, True West magazine cited Hutton’s massive body of work in film, TV, books, magazines and museums, as well as his teaching career and his tenures with the Western History Association and Western Writers of America. He told the magazine he had been a faithful reader since 1963.

“So, quite naturally, it is a great honor to receive this year’s True Westerner Award, not only because of the distinguished recipients who have preceded me, but also because of my long connection with this fabulous magazine. Both True West and I are determined to keep the glorious story of the American West alive for future generations,” he told the magazine.

Hutton is often asked by local media for his opinion. Recently and in years past, he’s been quoted in newspaper and TV stories over controversy about Kit Carson, who was known for fighting to remove Native Americans from Indigenous lands. In the late 1800s, Carson was a resident of Taos, where the name of a park named after him was changed in 2014. An Albuquerque elementary school is also named after him.

“Kit Carson is a controversial figure here in New Mexico and the animus toward him has spread nationally in the last year… This negative view stems from his role in the Navajo campaign of 1863 that led to the removal of the tribe to Bosque Redondo at Fort Sumner,” Hutton said, adding, “Of course he is hardly the only person from our past to suffer this fate  ̶ especially in recent times. The American past, like most nations, was at times a messy business. This is all part of the culture wars that have been raging for some time with western history often at ground zero. As a historian, I try to present the facts as I see them and let people make up their own minds. There should be a middle ground on these questions but it is difficult to find such a place in these polarized times.”

Hutton also was approached for his opinion earlier this year after the presidential election about the Teapot Dome scandal and President Warren G. Harding’s fall from grace in the 1920s and Albert Bacon Fall, who was Secretary of Interior at the time.

In addition to being an educator and consultant, Hutton is also the author of several books. His latest, The Undiscovered Country, is a narrative history of the frontier movement from the French and Indian War to 1900.

“I see the West as process  ̶  the westward movement  ̶  as much as place  ̶  the geographic region. My previous books have mostly focused on western military history, so this new book is much broader in scope,” he said.

His career at UNM began in 1985 and he was elevated to the rank of Distinguished Professor of History in 2006.

“While I teach all of American history in our U.S. surveys and upper-division and grad classes on military and western history, I specialize in the story of the American West, which I interpret as the American frontier movement from the earliest European invasions of the Americas to around 1900,” Hutton noted.

The History professor’s first experience with TV commentary began in 1991 when he was working on a screenplay about Davy Crockett when he was approached by a company called Greystone Communications to work on a show called The Real West, to be hosted by singer and actor Kenny Rogers.

“This was the dawn of cable TV and documentaries were suddenly popular as a result of Ken Burns’ Civil War series on PBS. The Davy Crockett film never got made  ̶  although director David Zucker did cast me in a scene with Leslie Nielsen and O.J. Simpson in Naked Gun 33 1/3  ̶  but The Real West from 1992 to 94 was a big hit with 67 episodes shot. I appeared in about 60. I also did talking-head duties on several episodes of Civil War Journal and Biography for Greystone. These shows were spun off to establish the new History Channel,” Hutton recalled.

“My children get quite a kick out of watching me age over time onscreen: ‘Will his hair turn gray before it all falls out or vice versa,” he joked.

Among the notable films he has worked on as a consultant are Ron Howard’s The Missing in 2003, Jon Favreau’s Cowboys and Aliens in 2010, and Gavin O’Connor’s Jane Got a Gun in 2016.

“My favorite historical character is Davy Crockett who I feel in many ways is the perfect representative of our American character,” he said. “That show was a sensation in 1955 and initiated the boom in westerns on TV, many of them dealing with figures from history such as Wyatt Earp, Bat Masterson, Cochise, Custer, Wild Bill Hickok, Kit Carson, and Daniel Boone. This was also the period of big-budget epic westerns  ̶  one-third of all films in the 1950s and 60s were westerns  ̶  so it was easy to get hooked on western history. Two other characters that have long fascinated me, and that I have written extensively about, are General Custer, whose historical stock has fallen even lower than Kit Carson’s, and Billy the Kid, who was the subject of a major exhibit I curated at the Albuquerque Museum in 2007.”