UNM Historic Preservation Committee to receive award from the state

The University of New Mexico Historic Preservation Committee (HPC) is receiving an award from the state’s Cultural Properties Review Committee for work with the Getty Campus Heritage Grant Program. The award will be presented at the 42nd annual Heritage Preservation Awards Ceremony, Friday, May 16 at 10 a.m. at the New Mexico Museum of Art in Santa Fe.

Terry Gugliotta, University Archivist, was principal investigator on the grant and chaired the HPC for seven years.  She said, “I am exceedingly proud that UNM is receiving the State Preservation Heritage Award for the Getty Campus Heritage Grant.  It is a project that continues to bring value to the University beyond my expectations.”

The grant provided $120,000 to preserve UNM’s historic resources and to develop a plan to integrate preservation into the master planning process at UNM, Gugliotta said. She submitted the grant application in 2004 and work was completed on it and approved by the Board of Regents in 2006.

The Getty Heritage Grant charged the committee to complete three goals: to create an inventory of campus buildings erected pre-1970; create a mechanism for UNM to nominate sites for state and national registers of historic places; and develop a preservation plan specific to each building, noting its historic value and character defining features.

The plan established heritage preservation zones, which include historic buildings, landscapes and open spaces important to the character of the campus, and the relationships between those buildings and landscapes, said Chris Wilson, HPC member and J.B. Jackson Chair of Cultural Landscape Studies, School of Architecture and Planning. 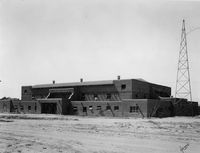 Carlisle Gym, circa 1930, was named for UNM student Hugh Carlisle, who was killed in World War I.

The task was too large for the small committee, so they sought assistance from Wilson’s Historic Research Methods course, required for the graduate certificate in Historic Preservation and Regionalism.

“The course focuses on methods for studying the built environment, including completing field survey forms, such as those for the campus heritage survey, archival research and how that research feeds into preservation planning, scholarship and informs contemporary design and planning,” Wilson said. He added that the interdisciplinary course included students from architecture, landscape architecture and planning, as well as anthropology, history and American studies.

“Will Moses, a master’s of landscape architecture student, developed a history of phases of campus landscape design, edited the course publication with me, and then worked as a paid graduate assistant on the final phases of the project with Karen Van Citters,” Wilson said.

The committee got assistance from Van Citters: Historic Preservation, LLC and Cherry/See/Reames Architects to get the two national nominations completed for the Naval ROTC building and Zimmerman Library’s west wing. Major modifications to Naval ROTC prevent it from being designated, but the Zimmerman Library nomination is before the state now, Gugliotta said.

Gugliotta didn’t consider the job done just yet, however. With help from UNM student Torran Kahleck, a senior in computer science, Gugliotta is developing an app, UNM Pocket Archivist, for iPhones and iPads, which allows people to conduct their own walking tour of the UNM campus. An Android version is slated for development, as well.

“I used the information gathered for the Getty grant as well as a book Van Dorn Hooker has written, that is yet unpublished, that explores all the UNM spaces, buildings and such that are named for individuals,” Gugliotta said. She said that campus visitors can click on a building name on the app and its architect, history and old photos will be displayed.

Gugliotta said public art tours and arboretum tours are also available through her app, which will be available the end of May. “This is really the culmination of the grant,” she added.

In the final report to the Getty, Gugliotta wrote, “I appreciate the opportunity the J. Paul Getty Trust’s Foundation has given me to lead the University of New Mexico’s Getty Campus Heritage Survey of buildings and landscapes…The key document of the project, the preservation plan, was distributed widely across campus and in the community for comment. Of seventy copies sent out, we received about a dozen responses from people who would be affected by the plan.”

Audra Bellmore, current HPC chair, submitted the nomination for the award. In the nomination, she wrote, “UNM’s distinctive campus architecture and landscape are a significant asset in marketing the university, in student, faculty and staff recruitment, and in fostering a quality environment for a major university.”