This is the third year UNM hosts separate ceremonies recognizing the successes of both graduate and undergraduate students. The graduate commencement ceremony honors doctoral and mater’s graduates, while the undergraduate commencement ceremony is the campus-wide graduation ceremony for Bachelor's and Associate's degree candidates from all schools, colleges and degree programs.

The graduate ceremony begins Friday, May 13 at 6 p.m. for approximately 900 doctoral and master’s candidates. Dean of Graduate Studies Julie Coonrod presides as master of ceremonies with Joel Delisa delivering the keynote address.

The undergraduate ceremony for nearly 2,700 baccalaureate and associates degree recipients is Saturday, May 14 at 9 a.m. Associate Vice President Terry Babbitt presides as master of ceremonies with graduate Kyle Stepp delivering the keynote address.

Both ceremonies will be held at WisePies Arena aka The Pit.

"At UNM our commitment is to embolden in our graduates the courage and will to ask the challenging questions that ultimately reveal their own new discoveries," UNM President Robert G. Frank. "As you look ahead, I hope you will keep that spirit of inquiry alive in everything you do, and in all aspects of your life. To the Class of 2016, I encourage you to take on the challenge of this commencement by leveraging the power of tradition as you launch yourself into the wide vistas of great visions. Build on all that our University has given you to take knowledge to new heights." 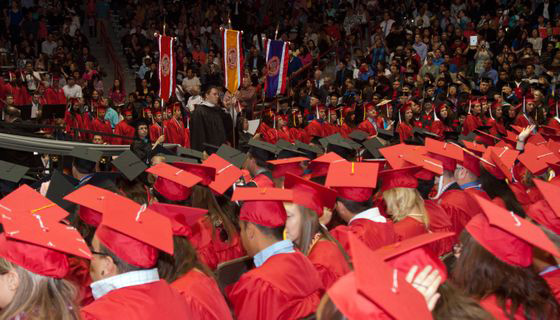 One of the special honors awarded during the graduate ceremony is the Tom L. Popejoy Dissertation Prize, presented this spring to Ben Waddell. Waddell is a first-generation college student who is an associate professor of sociology at Adams State University.

Waddell grew up in and around Telluride, Colo., where he observed deep social and economic inequalities. These experiences, coupled with extended trips to Latin America, inspired him to study issues related to human development, and specifically, migration. Today, Waddell researches matters related to development, international migration, and crime.

"At UNM our commitment is to embolden in our graduates the courage and will to ask the challenging questions that ultimately reveal their own new discoveries." – UNM President Robert G. Frank

Delisa, the keynote speaker for the graduate ceremony, is an American physiatrist with a variety of accomplishments during his career. Delisa was a professor and chairman of the Department of Physical Medicine and Rehabilitation at the University of Medicine and Dentistry of New Jersey in Newark, N.J. until his retirement in June 2012.

He is an experienced senior investigator, administrator and medical educator. His research interests include spinal cord injury, health delivery systems outcomes, and the evaluation of physician clinical competencies, as well as undergraduate and graduate medical education.

An active member of numerous professional organizations, DeLisa has a wide-range of experience as chairman, board member, and committee member. He was chairman of the Board of the American Physiatric Education Council. 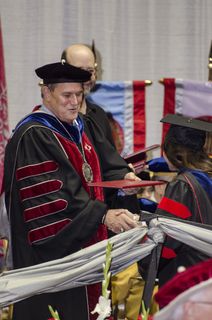 Stepp, the keynote speaker for the undergraduate ceremony, was born in Albuquerque and raised in Las Vegas, Nev. He learned at an early age to accept the many curveballs that life threw at him. At age 14, he was diagnosed with a rare form of bone cancer and given a 20 percent chance to live. He spent three and a half years being treated at UNM Children’s Hospital.

Since his diagnosis in 2008, Stepp has been a National Ambassador for Children’s Miracle Network Hospitals. By defying the odds, Stepp turned tragedy into triumph and today his adversities have led him to spread an epidemic of kindness, serving as his life’s mission.

During his time at UNM, Stepp has been a member of the Alpha Tau Omega Fraternity, an ASUNM Senator, founder of the LoboTHON Dance Marathon, Interfraternity Council President, voted the 2015 UNM Homecoming King, 2016 Greek Man of the Year and 2016 UNM Clauve Outstanding Senior Awardee, among other honors and recognitions.

Honorary degree recipients this spring include Anita Bradley Pfeiffer, V.B. Price and Polly Schaafsma. Pfeiffer will recieve a Doctor of Humane Letters, while Price and Schaafsma will both receive a Doctor of Letters.

Pfeiffer is a member of the Navajo Nation. Her clans are the To’dichíínii (Bitter Water people), Tsenjikini (Cliff Dwellers people), Lokáa Dinée (Reed people), and Naakaii Dinée (Mexican people). She is also Associate Professor (Emerita, 1973–2006) of the Department of Language, Literacy & Sociocultural Studies in the College of Education, UNM. Pfeiffer was born in the Northern Arizona town of Kayenta, considered to have “the most remote post office in the continental U.S.” Her early education consisted of both Western education and Traditional Navajo education, which she learned from her parents.

Price is a poet, award-winning reporter and author, a human rights and environmental columnist, editor, publisher, novelist and a long-time university teacher in New Mexico where he’s lived since l958. Price’s vision of New Mexico is of an enlightened and empowering place of irreplaceable natural beauty, diversity and cultural magnificence.

Schaafsma is an archaeologist with a specialty in Pre-Hispanic Indian rock art and kiva murals. With an academic background in art history (Mount Holyoke College) and a Master of Art’s degree in Anthropology (University of Colorado), her archaeological career, beginning in the 1960s, has established the graphic arts as an invaluable avenue to understanding the ancient past of the Greater Southwest.

Approximately 3,455 students are projected to receive degrees from UNM in Spring 2016.