The graduate ceremony, set for Thursday, Dec. 10, honor doctoral and master's degree candidates, while the undergraduate ceremony, honoring bachelor’s and associate’s degrees, is Friday, Dec. 11. Both ceremonies begin at 6 p.m. at Wise Pies Arena aka The Pit.

“I am so impressed with our graduates,” said UNM President Robert Frank. “Each has a unique story with its own challenges and rewards. Many are first generation college students. Some are veterans. Some are parents who balanced taking classes with raising families. All are Lobos who should be proud of their accomplishments here at UNM and inspired to take on the world. Congratulations!”

In addition to the degrees being conferred, the Presidential Award of Distinction will be awarded to recipients Patricia Crown and C. Jeffrey Brinker will receive recognition from Frank at the Dec. 11 commencement. Brinker and Crown are the fifth and sixth awardees of the award Frank established the award in 2013. 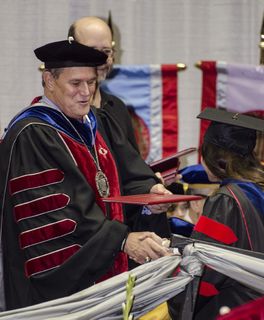 UNM president Robert Frank hands out a diploma and congratulates a graduate at commencement.

The speakers for this year’s fall commencement include undergraduate keynote Manuel Montoya, a professor of global structures at the Anderson School of Management. He received his Bachelor of Arts at UNM before pursuing his graduate education at Oxford University and Emory University as a George Woodruff Fellow (Ph.D.).

Paul Hommert, former director of Sandia National Laboratories and president of Sandia Corporation, is the keynote for the graduate ceremony. He began his career with Sandia as technical staff in 1976 and gradually moved up. Hommert initially led programs supporting energy research. He retired from Sandia National Laboratories in July 2015. In August of this year, he was named a Distinguished Fellow of the Council on Competitiveness.