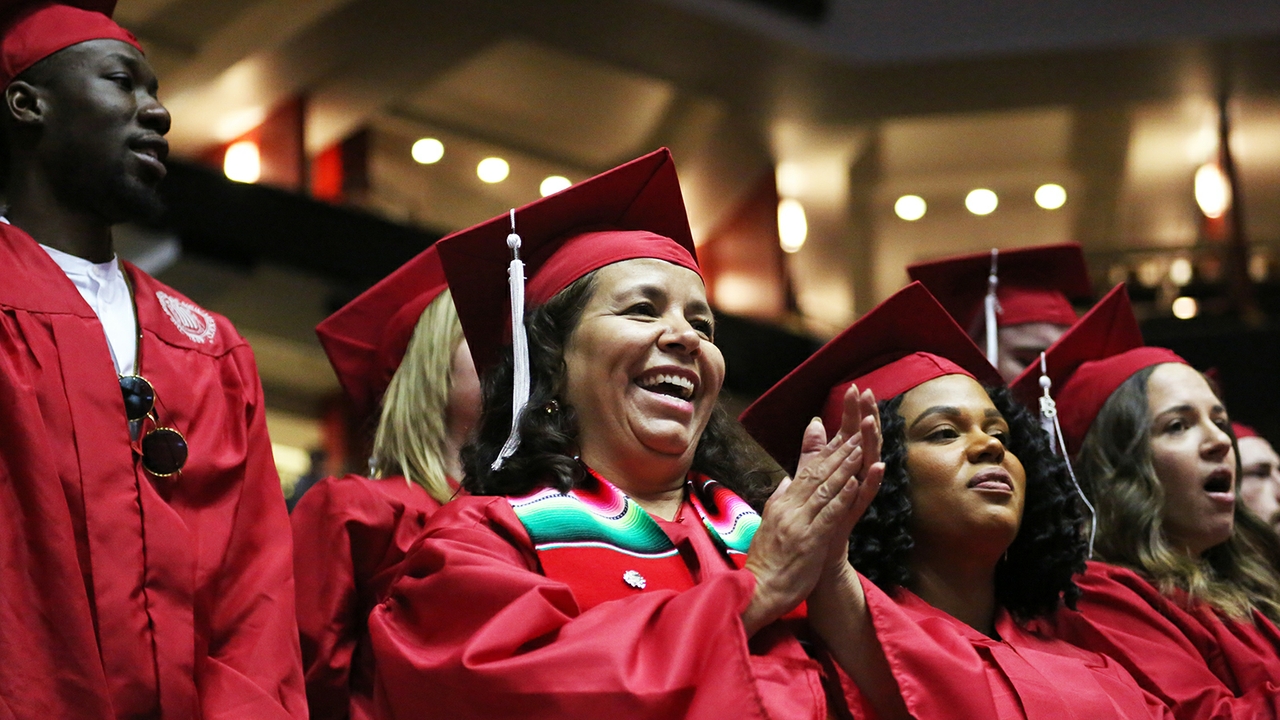 Commencement is often thought of as a “new beginning,” a time to conclude one facet of life and a time to start anew. On Saturday, May 11 at 9 a.m. at Dreamstyle Arena, about 3,800 students from The University of New Mexico will graduate as part of the institution’s 2019 Spring Commencement, a ceremony that honors all doctoral, master’s, bachelor's and associate's degree candidates from all schools, colleges, and degree-granting programs.

The master of ceremonies for this year’s commencement exercises is UNM Board of Regents President Doug Brown, who will preside over the ceremonies. The National Anthem will be performed by Vocalist Michaela P. Bateman, candidate for Bachelor of Music and Music Education. The keynote address will be presented by Gov. Michelle Lujan-Grisham.

One of the special honors awarded during the commencement ceremony is the Tom L. Popejoy Dissertation Prize, presented this spring to Dr. William Taylor, who earned his Ph.D. with distinction from UNM in 2017.

Taylor, a National Geographic Young Explorer, is an archaeologist and researcher at the Max Planck Institute for the Science of Human History in Jena, Germany. Born and raised in Montana, his research explores the ways that horses and other domestic animals have impacted human societies and human history around the globe.

His research has been funded by the National Science Foundation, National Geographic, the U.S. Fulbright Student Research program, and a number of other national and international granting agencies.

Taylor’s work on early horse culture in Mongolia and Central Asia has been featured by CNN and Science Magazine and published in leading international journals such as Proceedings of the National Academy of Sciences and PLoS One.

One of the long-time traditions that will be celebrated during commencement involves UNM's Golden Graduates. The UNM Alumni Association is celebrating the Class of 1969 to the Golden Graduates and Heritage Club Weekend—with activities on Friday and Saturday, May 10-11.

Alums will join fellow Lobos, friends and classmates in celebrating the Golden Graduates of 1969 and Heritage Club members, alumni who have graduated 50 or more years ago, for two days of fun events, including participating in UNM’s Spring 2019 commencement.

An Albuquerque native, Bateman is in her sixth and final year of studies at The University of New Mexico as both a Vocal Performance and Music Education major. She recently completed her student teaching at Rio Rancho High School and is currently teaching at Martin Luther King Jr. Elementary.