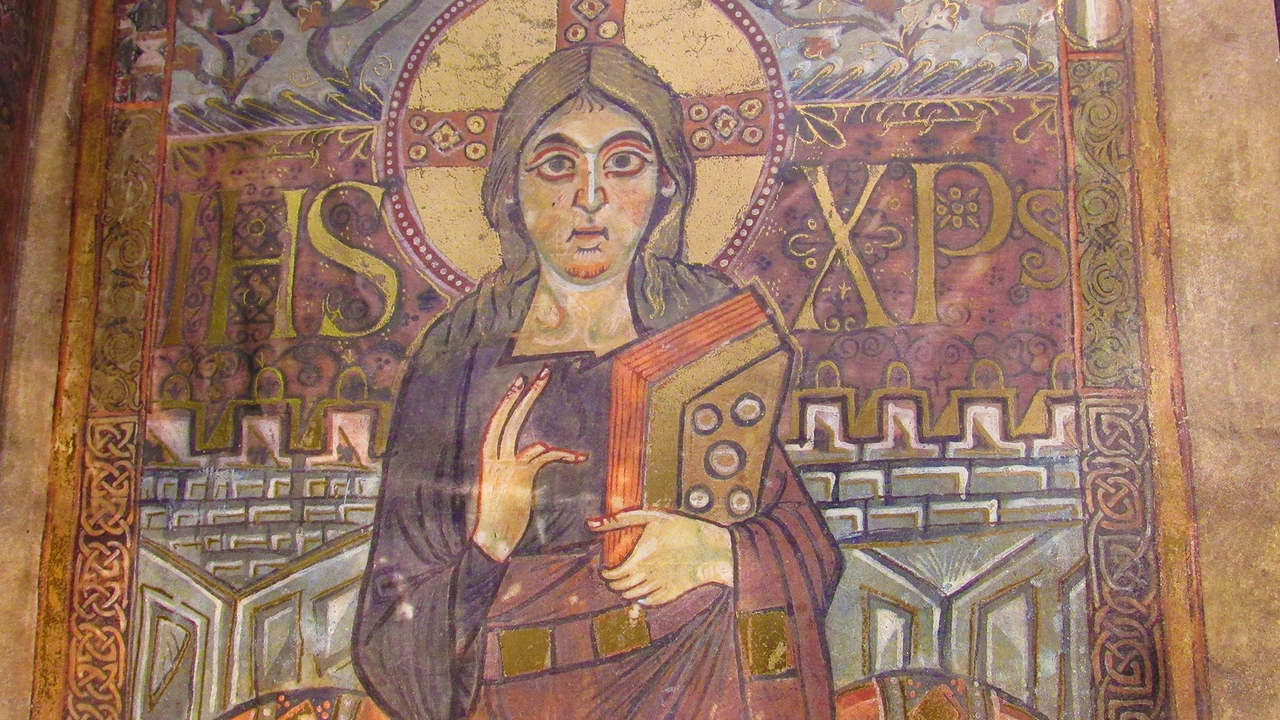 The Zimmerman Library owns a facsimile of the Godescalc Gospel Lectionary, an illuminated manuscript that includes this portrait of Jesus. 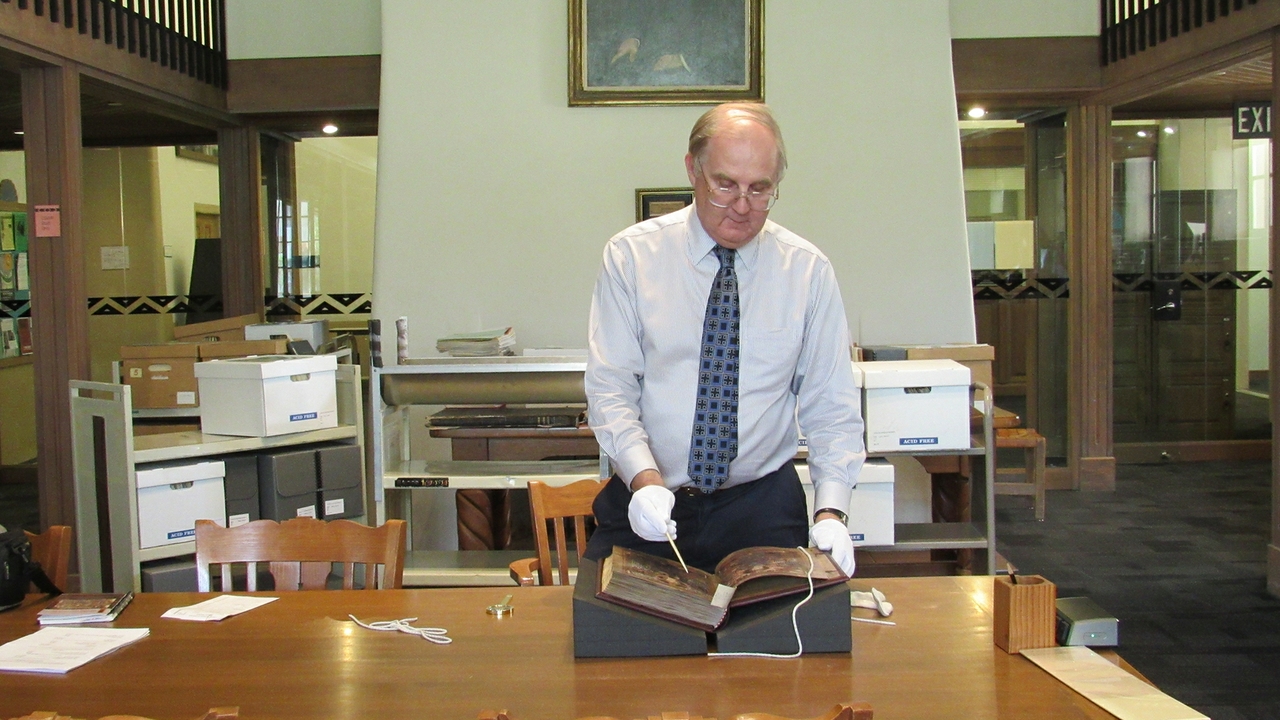 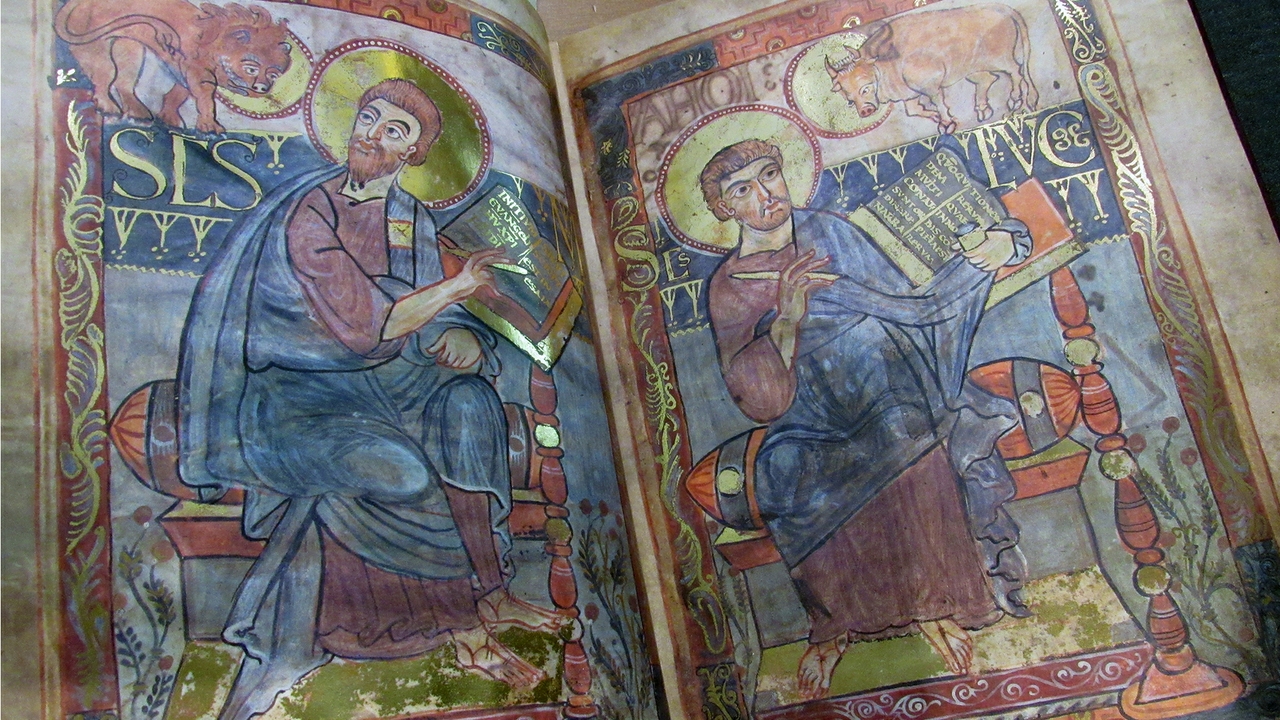 The Zimmerman Library owns a facsimile of the Godescalc Gospel Lectionary, an illuminated manuscript that includes these portraits of the Evangelists Mark and Luke.

Scholars from around the world come to UNM for learning opportunities
By Mary Beth King August 22, 2019
Categories: Inside UNM Institute for Medieval Studies

In Zimmerman Library on the campus of The University of New Mexico, there is a facsimile of the Godescalc Gospel Lectionary, an illuminated manuscript created by a Frankish scribe named Godescalc.

Professor Timothy Graham, wearing white gloves and using a bone folder – a bookbinding tool – to keep fingerprints off the gleaming pages, explained the illuminated drawings and Latin text were commissioned by King Charlemagne more than 1,200 years ago. The four Evangelists – Matthew, Mark, Luke, and John – are portrayed with their animal symbols, the winged man or angel, the winged lion, the winged ox or bull, and the eagle, respectively. A young Jesus gazes from another page shimmering with gold highlights, his fingers raised in blessing.

“It’s not quite the same as touching parchment, but it’s a pretty close comparison to the feel of an actual medieval manuscript,” Graham observed, noting that the facsimile also reproduces wormholes and tears in the original document. The Godescalc Evangelistary is inscribed in gold and silver ink on purple vellum in uncial and Caroline minuscule characters, the latter a precursor to the modern Times New Roman font.

This manuscript facsimile and other original medieval era pages in the library allow Graham, director of the UNM Institute for Medieval Studies, and his colleagues at UNM to teach students how to read, analyze, and handle ancient manuscripts. Graham came to UNM in 2002 as a professor and IMS director. He is an internationally-recognized specialist in medieval manuscripts who holds his bachelor’s and master’s degrees in History from the University of Cambridge, his M.Phil. in Renaissance Studies from the Warburg Institute at the University of London, and his Ph.D. in Anglo-Saxon, Norse, and Celtic studies from Cambridge.

UNM’s IMS is the hub of a robust assembly of Medieval Studies programs, events, academics, and resources – such as the Godescalc manuscript – that flourish here in New Mexico.

About 20 UNM students are working on their master’s and Ph.D. degrees in medieval European history or literature through the English or History departments in conjunction with the IMS. The UNM medieval program and faculty are internationally recognized, Graham said.

Graham recently announced that he was turning the IMS helm over to Professor Justine Andrews next year after 17 years as the director. Andrews, who is an associate professor of art history, has just completed a three-year stint as department chair at the UNM College of Fine Arts and will take over next summer. Graham plans to continue teaching

One of the most popular programs the IMS hosts is the annual Spring Lecture Series that brings in scholars from all over the world to present topics about medieval history and culture. Now in its 34th year, the event attracted around 1,700 students and members of the public in March to hear scholars from the prestigious University of Cambridge and the University of London, the Cloisters in New York City and Yale, Harvard, Columbia, and Princeton universities, as well as from Graham himself. Topics included the collection of medieval items at the Cloisters museum to preserving ancient documents to a performance by the UNM Early Music Ensemble.

“There is nothing like it in the country,” Graham said. “We’re apparently doing a good enough job that people want to keep coming back year after year. A number of attendees have been coming at least 25 years or more.” Also, the series is popular with scholars and experts around the world who are anxious to experience the ancient history and culture of the American Southwest.

For the first time, the popular Spring Lecture Series is available on YouTube. The seven high-quality videos were filmed and produced by a professional videographer, Graham noted. Original images from the presenters are integrated into the videos so they’re highly viewable and detailed. The clips are also close-captioned for the hearing impaired.

“The subject matter of medieval history is intrinsically interesting, particularly when it’s well presented. And also, medieval art is very satisfying and stimulating and each year we try to have at least one presentation on art history that is going to be really beautiful and illustrated with some art. Good visual material really helps keep people engaged. You wouldn’t think such an event in New Mexico would create such a following.”

This summer, the IMS hosted the International Society of Anglo-Saxonists for a program that highlighted comparisons and contrasts between the southwest region of England and the American Southwest and New Mexico. The one-week conference attracted scholars from 77 different universities in the U.S. and Canada, the U.K., Ireland, Germany, and Qatar. In addition to delving into many aspects of Anglo-Saxon history in England, the conference included a presentation by UNM Anthropology Professor Patricia Crown about the Middle Ages in New Mexico at Chaco Canyon and an excursion to Acoma Pueblo.

UNM is in good company, Graham said. The International Society of Anglo-Saxonists has previously held their conferences in the U.K., the U.S. and Canada, Germany, Finland, and at universities such as Stanford, Notre Dame, Cambridge, and Oxford.

“People love being here and have highly complimentary things to say about their experience at UNM,” Graham said, adding that word of mouth from participants to their colleagues and students is invaluable in recruiting speakers for upcoming events. Even if they can’t attend when originally invited, most ask to be put on the list for other events, he observed.

“It frankly never ceases to amaze me,” he said.

The IMS also reaches into the Albuquerque community, Graham noted. As part of their degree program, in addition to teaching classes at UNM, grad students go into local middle and high schools to teach Medieval Studies and, Graham hopes, intrigue younger students enough that they will be attracted to UNM and the IMS program.

Anyone can become a member of the Friends of Medieval Studies. Members will receive notice of the Spring Lecture Series and other events and are honored for their support at an annual holiday reception.