The fate of Jewish lawyers in Nazi Germany
January 24, 2017
Categories: Inside UNM School of Law 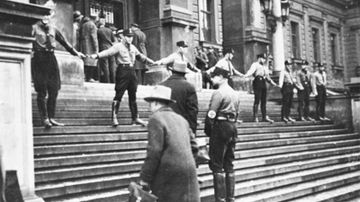 The University of New Mexico School of Law is hosting the internationally acclaimed exhibit, “Lawyers Without Rights: Jewish Lawyers in Germany under the Third Reich” from Tuesday, Feb. 7 through Friday, Mar. 11.

This exhibit has been shown in nearly 100 cities in Germany, the United States and others parts of the world.

Jewish lawyers in Nazi Germany were one of the first populations targeted by the Nazi regime. While a sizable group emigrated, others went into hiding, ended up in jail, or worked in concentration camps. The fate of those judges and lawyers is highlighted in the exhibit.

The Law School is launching the exhibit with a reception and a talk on Tuesday, Feb. 7 from 5–6:30 p.m. in the Forum at the Law School.

At 5:30 p.m., Regents Professor Sherri Burr will present, “Defining Others to Justify Abolishing Legal and Human Rights: Parallels between Jews in Nazi Germany and Free Blacks in Colonial Virginia.”

Four hundred years of history reveal an ongoing tendency of those who seize power with evil intent to define groups as other, target them, and systematically reduce or eliminate their legal and human rights. Burr posits that we must study what happened to other groups in order to avoid making the same mistakes now and into the future.

The program is free and open to the public. It has been approved by the New Mexico Minimum Continuing Legal Education Board for 1.0 general hour of credit. Free parking is available in the Law School “L” parking lot. Early registration is advised and is available on the Law School website or by calling 505-277-2146.

This showing is sponsored by UNM School of Law and the Holocaust and Intolerance Museum of New Mexico in conjunction with the American Bar Association and German Federal Bar. The reception is sponsored by Aleli and Brian Colón.

For UNM Law School building hours of operation and parking visit their website.