A new book by University of New Mexico School of Law Professor Joshua E. Kastenberg is the first published history to explore the military legal expansions of Major General Enoch Crowder, Judge Advocate General of the U.S. Army. Kastenberg also examines the development of the laws of war and the changing nature of civil-military relations.

“To Raise and Discipline an Army: Major General Enoch Crowder, the Judge Advocate General’s Office, and the Realignment of Civil and Military Relations in World War I,” has been released by the Northern Illinois University Press and is available from various book stores, including Amazon. 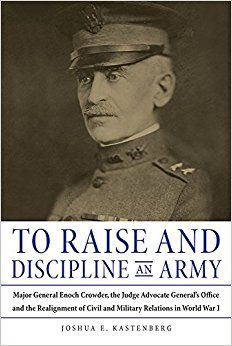 "To Raise and Discipline an Army: Major General Enoch Crowder, the Judge Advocate General’s Office, and the Realignment of Civil and Military Relations in World War I " by UNM School of Law Professor Joshua Kastenberg.

In 1915, Crowder convinced Congress to increase the size of the Judge Advocate General’s Office—the legal arm of the United States Army—from thirteen uniformed attorneys to more than four hundred. Crowder’s recruitment of some of the nation’s leading legal scholars, as well as former congressmen and state supreme court judges, designed many of the laws and policies and helped legitimize President Woodrow Wilson’s wartime military and legal policies.

The book was reviewed by Fred L. Borch, regimental historian and archivist, US Army Judge Advocate General’s Corps, who comments, “No book has ever told the story behind this remarkable expansion of military legal talent. Kastenberg shows that the influential work of army lawyers significantly altered civil-military relations in the US. He should be commended for his exhaustive use of primary sources.”

Burrus M. Carnahan, lecturer in law, The George Washington University, former judge advocate, US Air Force, also reviewed the book. “This is an original and significant contribution to the fields of legal history and US military history, thoroughly researched and clearly written,” said Carnahan.

Prior to joining the UNM Law School faculty in September 2016, Kastenberg had a 20-year career as a lawyer and judge in the U.S. Air Force. He has published several books on law and the military, including Shaping US Military Law: Governing a Constitutional Military.