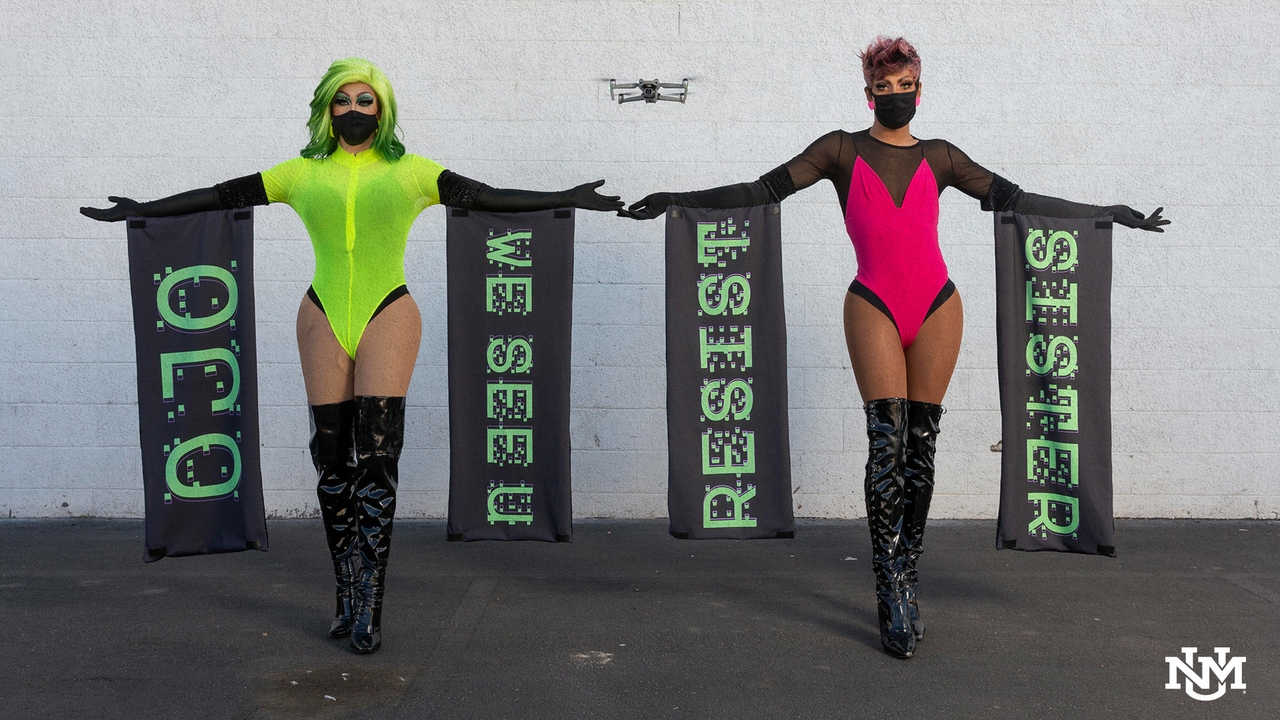 New Mexico's fronteristxs collective has been awarded $30,000 for The House of An-Aesthesia, an experimental runway performance with ungendered looks designed to disrupt surveillance technologies in Albuquerque, a city with one of the highest police brutality rates in the nation. The grant is from the MAP Fund, the longest running private funding source for new performance works, which invests in performing artists and their work as the critical foundation of imagining and co-creating a more equitable and vibrant society.

fronteristxs is a collective of artists in New Mexico working to end migrant detention and abolish the prison industrial complex and imagines and fights for a world of liberation for all. The fronteristxs collective consists of The University of New Mexico associate professor of Art & Ecology Szu-Han Ho, UNM associate professor of English Bernadine Hernández, and UNM alumni hazel batrezchavez and Martín Wannam, who received their Master of Fine Arts degrees in 2020. Martín Wannam is currently assistant professor of Art at University of North Carolina, Chapel Hill; hazel batrezchavez is the 2022 Artist in Residence at Radford University Department of Art.

House of An-Aesthesia (HOAA) utilizes fashion as a tool to disrupt the collective numbness to the surveillance and policing we experience in everyday spaces, Ho explained. HOAA examines the intersections of fashion, race, gender, sexuality, ability, policing, and capitalism in order to build life-affirming communities through an abolitionist framework.

A video created by the group examines community surveillance by the Albuquerque Police Department and notes why they object: “Increased community surveillance leads to increased encounters between residents and the police, and as we know too well, more police encounters with people of color lead to more injury and death. Surveillance technology deployments by police agencies are overwhelmingly unleashed against communities of color. Increased surveillance on communities of color will turn our world into an open-air prison. Even worse, it will place residents at extreme risk, because all police encounters begin with surveillance.”

Some mass surveillance tools used by police include surveillance planes with powerful cameras; surveillance cameras with facial recognition that can track people in public and are far more likely to misidentify persons of color; cell-site simulators that use cellphones to locate people and track their movements; automatic license plate readers that track drivers; Intelligent Virtual Assistants such as Amazon Alexa, ECHO, Dot, Google Assistant, Nest, and Siri, devices that record and listen in to conversations; software that can be used to turn on computer or smartphone cameras or microphones without being detected and can be used by private hackers as well as FBI, police agencies, and others.

In the U.S., the current state of militarized policing blurs the lines between private and public, criminal and innocent, and human and less-than-human.

“We live in a world in which we perform for surveillance technologies every day. HOAA takes the form of an experimental runway show with 12 ungendered looks designed to perform for and to disrupt surveillance technologies such as facial recognition software. There is no blueprint for the abolitionist world we want to build, but House of An-Aesthesia is one enactment of this world that embraces glamor and defiant exuberance in order to counter the fear and violence created by the present police surveillance state,” Ho said.

MAP Fund grantees use jazz, ghost stories, clowning, butoh (Japanese dance), puppetry, Bharatanatyam (Indian dance), musical theater, folklorico (Mexican dance), and more to explore connections between topics such as Japanese cultural erasure and consumer culture or Big Tech vulture capitalism and border imperialism. They take audiences inside an apartment building of immigrant families in Chicago; a public water-and-fire ceremony in small Pennsylvania town; and a historic intervention at the former home of Esek Hopkins, commander of the slavery ship Sally, in Providence. Grantees use their deep knowledge to push collective thinking forward with questions about how society might address environmental justice issues in Latiné American countries; the medical racism faced by Black women; and societal myths about aging. They envision better worlds – using their projects to call again and again for peace, rest, love, healing, space, connection, and joy.