UNM Libraries opens the digital door to a treasury of information

Two years ago the College of University Libraries and Learning Sciences held a formal celebration to commemorate the acquisition of three million books. It took the University of New Mexico more than 120 years to accumulate that collection.

Today, with little fanfare, anyone with a UNM ID now has open access to more than five million volumes, bringing the total to more than eight million volumes. It is digital access through the HathiTrust, a partnership of academic and research institutions. The university pays a yearly subscription fee to access the volumes.

What is HathiTrust?
Remember when Google began digitizing books in 2004? The company worked with Harvard and universities in Michigan, Indiana, California and New York to digitize their holdings. UNM now has access to those digitized books and documents, and other deposited content as a partner in the HathiTrust, a nonprofit digital library.

Anyone doing an online search through UL&LS can now instantly access those books. For scholars in the humanities, it is like opening a treasure chest.

The new volumes include many books printed though 1923. Those books are now out of copyright and in the public domain. UNM has some of the books in printed form, but there are hundreds of thousands that – up until now were only available in printed form in other libraries.

Any researcher who needed access to a particular book that UNM did not have would request it through an interlibrary loan or travel to the library that held it. HathiTrust gives scholars at UNM the same easy access that scholars at other major research university libraries have.

“Universities founded well before UNM created great collections of 19th century and earlier materials,” said Richard Clement, dean of UL&LS. “They mostly were from the 19th century because that was the current material they were buying and we didn’t have that depth here. Now we do.”

Clement is a board member of the trust and serves as chair. He has a hard time containing his enthusiasm about the potential that being a HathiTrust partner offers the university.

There are currently 105 member institutions in HathiTrust. Each is expected to contribute to the general effort to digitize information. To that end Clement has established a new department of Digital Initiatives and Scholarly Communication, with Kevin Comerford as the director. 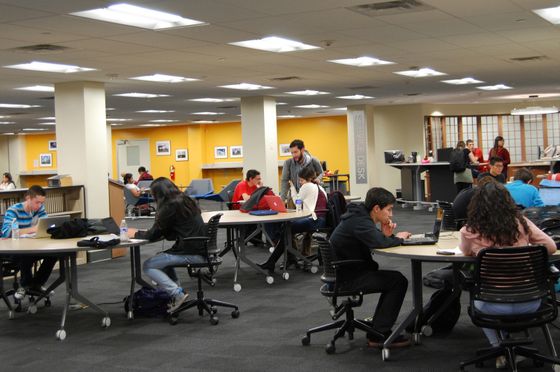 “We have shelves and shelves and ranges of materials that are very valuable and important materials for research,” Clement said. “The problem is when the whole system got going at the Government Publishing Office; they created a system that is so arcane that nobody – except somebody who has worked with it for years can understand how it works.”

Google is digitizing government documents for HathiTrust and members are providing good metadata so they can actually be found in an online search. The trust is also creating a registry or catalog. Clement said currently no one knows how many U.S. government documents exist. The guess is about 2.2 million.

HathiTrust partners and Google have already digitized approximately 600,000, and Clement says UNM will likely be asked to contribute to the national effort. He hopes that entire corpus of printed government documents will be digitally available and easily searchable within the next five years.

Clement hopes UNM can contribute in another way. He anticipates that UNM will contribute the unique and significant volumes from the Southwest and Latin America collections to enrich the national holdings of HathiTrust.