UNM Newsroom / News / UNM names the only Indigenous chair of architecture program in the U.S. 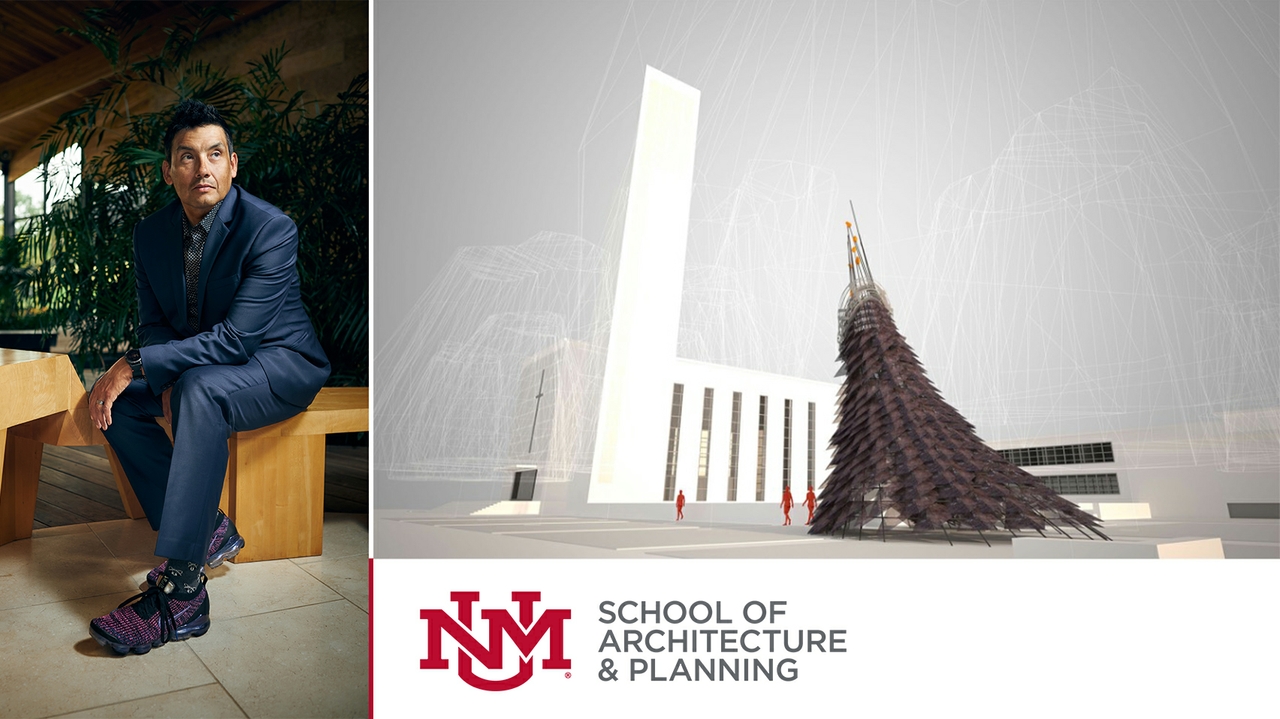 Chris Cornelius was recently named chair of the Department of Architecture at The University of New Mexico School of Architecture and Planning (SA+P) following a national search. He takes over from Regents’ Professor Kuppaswamy Iyengar, who served as acting chair following Professor John Quale’s tenure as department chair since 2014.

"We’re thrilled to have Chris Cornelius, who brings exemplary experience in design pedagogy and architectural design, as well as expertise in the study of contemporary Indigenous architectural representations. He is a leading voice in critical debates now taking place on the decolonization of architectural pedagogy,” says Robert Alexander González, dean of the School of Architecture and Planning. “We’re grateful to Professor Iyengar for his able leadership as acting chair and to Professor Quale for his many years of dedication and contributions to the department.”

Cornelius is a citizen of the Oneida Nation of Wisconsin, and he is the founding principal of studio:indigenous, a design and consulting firm serving Indigenous clients and focusing on the architectural translation of cultural practices. Selected projects include the Oneida Veteran’s Memorial, the Oneida Maple Sugar Camps, and the Oneida Cultural Heritage Campus Master Plan and Visitors Center. He also worked with architect Antoine Predock as cultural consultant and design collaborator on the Indian Community School of Milwaukee, which won an AIA Design Excellence Award in 2009.

Cornelius has been a faculty member in the Department of Architecture at the University of Wisconsin-Milwaukee since 2004, and in the Spring 2021, he was named a Louis I. Kahn Visiting Assistant Professor of Architectural Design at Yale University.

Cornelius’s design work has gained international notoriety, including his Radio Free Alcatraz drawings, which explore the historical, geological, and cultural context of the 1969-71 Occupation of Alcatraz Island in San Francisco Bay. In 2003, he received the prestigious Smithsonian Institution Artist-in-Residence Fellowship from the National Museum of the American Indian.

He is also the recipient of numerous awards and honors, such as the Miller Prize from Exhibit Columbus for Wiikiaami, which was selected for an installation on the site of the Eliel and Eero Saarinen-designed First Christian Church. Cornelius also received the 2018 Architect’s Newspaper Best of Design Award for his Trickster (itsnotatipi) shelter/sculpture, located at Bookworm Gardens in Sheboygan, and the 2021 Architect’s Newspaper Best of Practice Awards, for Small Firms in the Midwest. The World Architecture Community recently included Cornelius in its “Who’s Who of Indigenous Architects,” noting his participation in the 2018 Venice Architecture Biennale.

“What makes us especially excited,” González states, “is Chris Cornelius’s focus on design pedagogy and analytical and narrative drawing because of our commitment to educating students in this culturally rich region. There’s a call now for the re-evaluation of the extent to which the design practices we teach our students are culturally responsive, and Cornelius will serve as an excellent departmental leader in this charge.”

González is also impressed with Cornelius’s inclusion in the book The Multi-Skilled Designer: A Cognitive Foundation for Inclusive Architectural Thinking (Routledge Research, 2019), where the author compares Cornelius to one of Asia’s most influential architects, in the book chapter: “Naturalistic Skills: Geoffrey Bawa’s Bio-climatic Sensibilities and Chris Cornelius’ Landscape Narratives.”

“Not unlike Bawa’s creation of a new language of expression to depict naturalistic architecture, Cornelius uses his own unique techniques to represent the layered histories of his native Indian culture,” D’Souza states. “Incorporating stories and traditions, his affiliation to naturalistic skills is more implicit than explicit…The idea of story-telling and the implicit centrality of nature in all its manifest forms are critical aspects of Cornelius’s design process.”

Top image: Wiikiaami, by Chris Cornelius. Winner of the Miller Prize, installation at the First Christian Church by Eliel and Eero Saarinen.