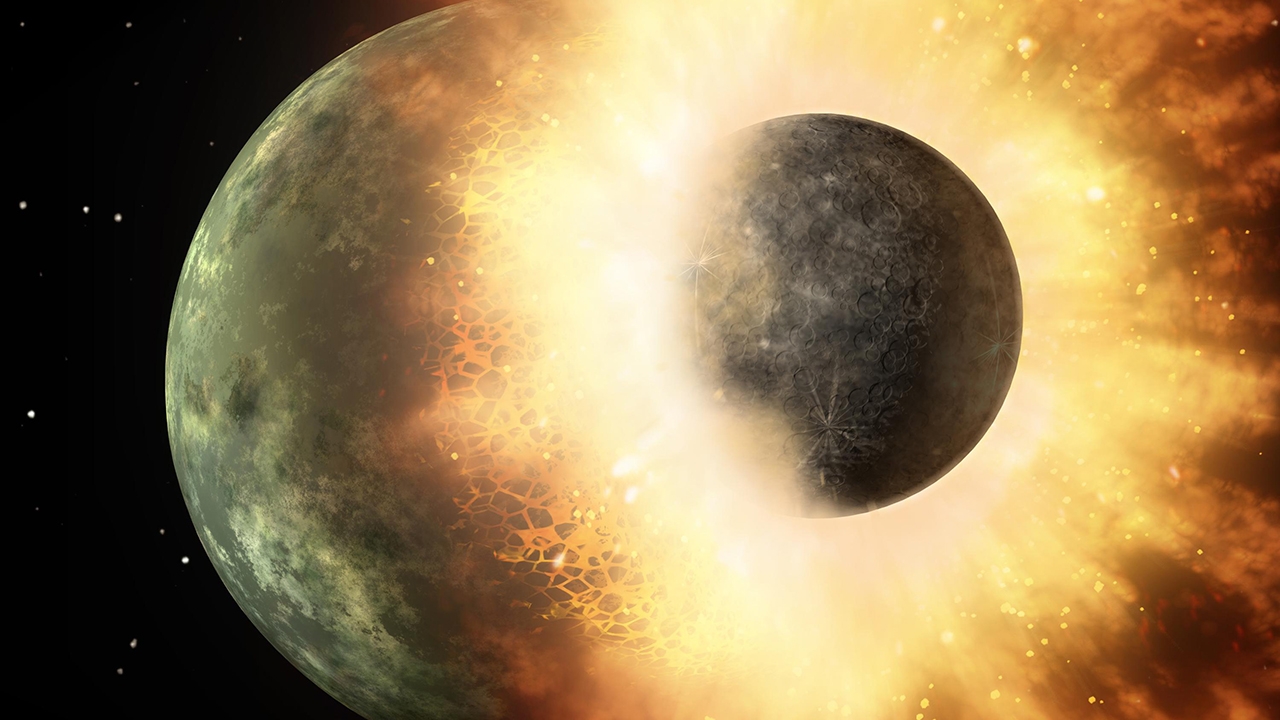 An artist's depiction of a collision

between two planetary bodies. Such an impact between Earth and a Mars-sized object likely formed the Moon.
Credit: NASA/JPL-Caltech 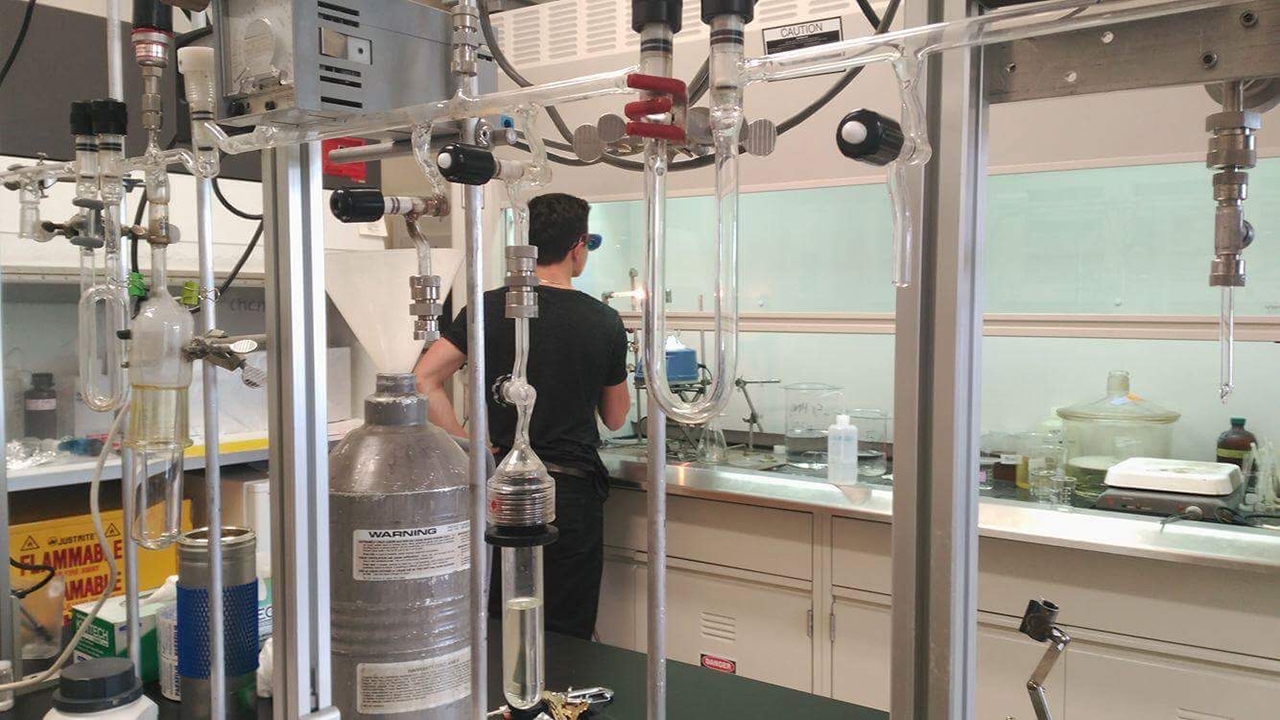 Tony Gargano works in a lab.

It’s been more than 50 years since the Apollo missions, and in that time, chemical analyses of the recovered lunar materials have revolutionized our understanding of planetary materials. One of the major findings as a result of this research is the recognition that the Moon is exceptionally depleted in particular volatile elements, and that these moon rocks also exhibit large chemical anomalies unlike anything seen on Earth.

In new research, authored by University of New Mexico graduate student Tony Gargano and scientists from UNM's Center for Stable Isotopes, in collaboration with scientists from NASA’s Johnson Space Center, published today in the Proceedings of the National Academy of Sciences (PNAS) titled Chlorine isotope composition and halogen contents of Apollo-return samples, researchers focused on chemical analyses of halogens, or the highly reactive elements F, Cl, Br, and I (fluorine, chlorine, bromine, and iodine) and found that lunar materials are exceptionally depleted in these elements, with unusually high amounts of the heavy form (stable isotope) of chlorine, which they explain as a result from the Moon-forming Giant Impact. The study of these volatile elements and isotopic systems helps scientists to better understand the chemical evolution of planets.

“When we are trying to understand how planets form and how life can be sustained on them, we’re concerned with retaining certain elements which are necessary for life such as hydrogen, or water – but we also know we need to lose some such as Cl which can be toxic to life at high concentrations.” Gargano continues, “The moon is a case study for how volatile elements are processed throughout planetary evolution - we have an abundant sample suite of rocks collected by the astronauts during the Apollo missions that allow us to test these ideas and processes.”

“The chlorine isotope composition of these rocks is unlike anything we’ve ever seen, and it’s important to find out how these elements are lost over time,” explained Regents’ and Distinguished Professor Zachary Sharp in the UNM Department of Earth and Planetary Sciences, and Gargano’s advisor.

Additionally, Gargano was awarded a NASA Graduate Fellowship and spent time at NASA’s Johnson Space Center with Planetary Scientist Justin Simon conducting additional analysis using instrumentation in NASA’s Center for Isotope Cosmochemistry & Geochronology Lab (CICG), a lab that measures a wide variety of elements and their isotopes to understand the origin of our solar system, the processes that transformed nebular dust and gas into the building blocks of planets, and planet formation.

The UNM and NASA team together developed a method for analyzing trace halogen contents in planetary materials and measured the amount of fluorine, chlorine, bromine, and iodine within lunar samples. Specifically, they analyzed lunar rocks known as mare basalts and the ferroan anorthosites. They found that these rocks have very low halogen contents alongside unusually high amounts of the heavy isotope of chlorine.

The researchers explain that the Moon-forming Giant Impact led to the violent expulsion of Cl and other halogens which contributed to the unique chemistries of rocks from the Moon. Gargano explains the significance of this work by saying “We know that the amount of chlorine lost from a planet throughout its formation history is reflected in the Cl isotope composition of rocks from that body. Ultimately, everything started from the same original materials present at the beginning of the solar system, but different planets have undergone different chemical evolutions that result in differing chemical compositions we can measure today.”

Gargano’s advisors, in addition to Sharp, include Charles Shearer in the Institute for Meteoritics, who were both the first to measure chlorine isotopes in moon rocks. Gargano et al expanded on this pioneering research.

“We used a mass spectrometer in our lab at UNM’s Center for Stable Isotopes to make these measurements of lunar samples collected by Apollo astronauts,” said Gargano. “The important fact is that we used a suite of rocks called ferroan anorthosites which are some of the oldest rocks we have that record the earliest stages of the Moon’s evolution. These rocks, which are the white part of the moon you can see from Earth, don’t contain the mineral apatite which is largely what has been measured since the first work from Sharp in 2010.”

“These bulk chlorine isotope measurements are difficult and have only been performed by Zach and I on lunar materials,” says Gargano.

“The fascinating part was the isotopic data and what it told us about how the moon devolatizes and cools,” added Sharp. “We know it is a result of the Giant Impact between the proto-Earth and the moon that caused a mass transfer during that event. It’s very unusual data and begs the question why does it happen on the moon and not the Earth?”