The University of New Mexico is joining women across the world in solidarity.

The Iranian Student Association and the Global Education Office are hosting an event for the International Day for the Elimination of Violence Against Women.

The day, scheduled for Nov. 25, has been observed by women's rights activists since 1981. This date was chosen to honor the Mirabal sisters, three political activists from the Dominican Republic who were murdered in 1960 by order of the country’s ruler, Rafael Trujillo.

The United Nations General Assembly officially established the day  in 2000 as resolution 54/134.

These UNM organizations will host an event on campus Monday, Nov. 28.

There will be a panel presentation and discussion about women’s rights in the Middle East.  Speakers will include women faculty and activists from the region. 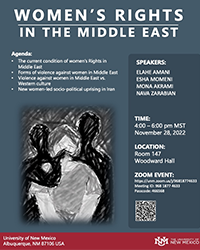 “This is to know more about violence against women in the Middle East and new movements for equality and freedom, like what’s happening in Iran for women, life and freedom," student organizer Mahtab Soleimani said.

This year, the International Day for the Elimination of Violence Against Women will mark the launch of the UNiTE campaign by the U.N., an initiative of 16 days of activism ending on Dec. 10, International Human Rights Day.