The University of New Mexico is a member of a team that has signed a formal agreement to bid jointly to manage Albuquerque-based Sandia National Laboratories.

The announcement was made today at a press conference at UNM.

UNM is a member of the team led by Battelle and The Boeing Company, along with The Texas A&M University System and the University of Texas System.

The U.S. Department of Energy’s National Nuclear Security Administration has initiated a competition for the contract to manage and operate Sandia National Laboratories, which also has a laboratory in Livermore, California. Sandia is a federally-funded research and development center responsible for non-nuclear engineering development of all U.S. nuclear weapons and for systems integration of the nuclear weapons with their delivery vehicles.

A contract decision is anticipated by the end of this year.

“UNM and Sandia have shared a strong, multidimensional and strategic research collaboration for many decades, aligned both in proximity and in mission,” said UNM President Robert G. Frank. “We believe that our team will strengthen our impact on research in national security and provide many benefits to the local community and the state of New Mexico.”

Currently, more than 2,400 UNM graduates are employed at Sandia.

Joseph L. Cecchi, dean of the UNM School of Engineering and associate provost for national laboratory relations, said that having UNM on the management team will strengthen and expand the research already taking place between the insitututions.

“UNM, and especially the School of Engineering, will benefit greatly from increased opportunities for collaboration with the Labs,” Cecchi said. “Such a partnership could result in more research funding, more research projects, and enhanced teaching and learning for students in a variety of disciplines across the University.”

“We believe that our team will strengthen our impact on research in national security and provide many benefits to the local community and the state of New Mexico.” – UNM President Robert G. Frank

The Boeing Company is the world's largest aerospace company and leading manufacturer of commercial jetliners and defense, space and security systems.

The University of New Mexico, the Texas A&M University System, and the University of Texas System will ensure that Sandia science, technology and engineering capabilities are sustained, enhanced and nurtured. The team will create new collaborative research programs with Sandia and develop stronger ties with New Mexico’s colleges and universities. 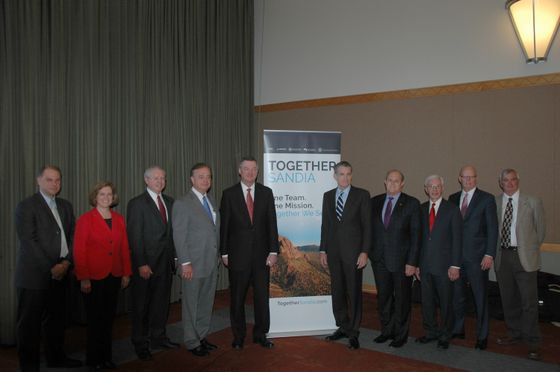 Members from the Together Sandia team.

“We have exactly the right team to lead an already outstanding laboratory and take it to an even higher level of excellence,” said Jeffrey Wadsworth, Battelle president and CEO. “Battelle, Boeing and the universities look forward to working in close partnership with National Nuclear Security Administration to strengthen our nation’s nuclear security posture.”

“Sandia ensures the U.S. nuclear stockpile is safe, secure, and reliable and can fully support the nation's deterrence policy. Their mission of service to the nation is directly aligned with our team’s mission,” said Ed Dolanski, president of  Boeing Global Services & Support. “Battelle’s leadership in national lab management and Boeing’s leadership in weapons and systems engineering will provide new capabilities to help NNSA more effectively meet their nuclear security objectives.”

The Texas A&M University System, which will lead the Texas Research and Education Partnership that includes the University of Texas System, is one of the largest systems of higher education in the nation with a statewide network of 11 universities and seven state agencies. 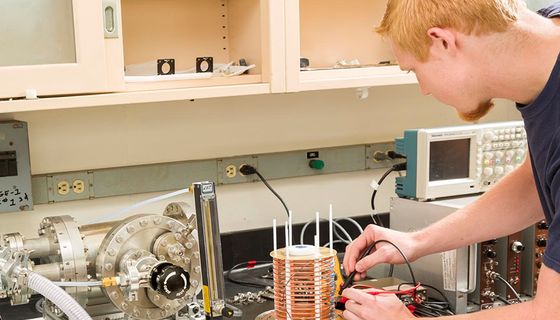 A student at The University of New Mexico works in a laboratory at the School of Engineering.

“When this opportunity arose, Dr. Kathy Banks, Texas A&M Engineering Vice Chancellor and Dean, and I knew we were in a unique position to serve our nation. Four years ago, our first call was to Battelle, and this ideal team was created,” said John Sharp, Chancellor of The Texas A&M University System.  “The Texas A&M System has the capabilities, experience, and a history of national service that are unmatched by any other university system. This foundation positions us well as a key partner to lead Sandia National Laboratory to greater technical excellence, and Greg Abbott, Governor of Texas, was the key to making this partnership happen.”

The University of Texas System is the second-largest public university system in the nation with an enrollment of 217,000 students across 14 institutions. The UT System has a long-standing relationship with Sandia National Laboratories and has worked closely with the Labs to supply the skilled scientists and engineers needed to support Sandia’s mission and on numerous science and engineering projects that are important to the nation’s security.

“Partnering with industry and academic leaders in research and development areas that ultimately will help safeguard America is a phenomenal opportunity and the UT System is proud to be doing its part,” said UT System Chancellor William H. McRaven. “This collaboration is a perfect fit, leveraging the research power of stellar universities as well as the expertise of Battelle and Boeing to elevate the already remarkable development coming out of Sandia National Laboratories.” 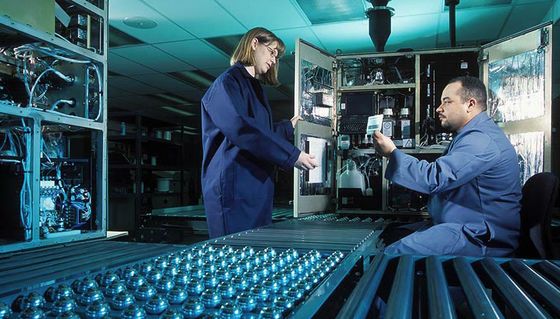 “New Mexico’s national laboratories are a vital part of our economy and play an indispensable role in protecting our national security, while keeping our state at the cutting edge of technological innovation as well,” added New Mexico Gov. Susana Martinez. “I’m grateful to all our partners coming together to support Sandia National Laboratory, and I’m looking forward to seeing this project help accomplish even more great things for New Mexico’s partnership with our national labs and military bases.”

The team has an office in Albuquerque at 4411 The 25 Way NE, Suite 350. Sandia employees and the community are invited to visit the office to learn more about the team.

Additional information can be found at TogetherSandia.