The University of New Mexico has partnered with Albuquerque’s Emerging 2030 District, a nationwide initiative—with established, grassroots districts in Seattle, Pittsburg, Cleveland, Denver, Dallas, Los Angeles and San Francisco—formed to meet the urban sustainability standards set by the 2030 Challenge for Planning.

Albuquerque’s Emerging 2030 District is a private sector-led effort utilizing collaboration, incentives, shared resources and public-private partnerships to promote the development of high-performance buildings and a healthier, livable city of the future.

Participating 2030 District property owners, including UNM, voluntarily commit to reducing their existing properties' environmental impact by 50 percent, by the year 2030, with regard to energy use, water use and transportation-related emissions.

UNM has been committed to reducing energy consumption since the 1970s and has many years of experience in developing innovative strategies and procedures to support sustainability and energy conservation.

Part of this initiative includes sharing utility data and best practices in order to support this collaborative effort. This type of community involvement is an example of UNM’s commitment to education and serving the New Mexico community.

Information sharing is a key element to this program’s success. UNM will benefit from this collaboration because even though it has been thinking about these issues for many decades, these partners will bring their ideas and successes to the table for discussion, opening up a world of possibilities.

“We have many years of practice when it comes to reducing the University’s environmental impact, and we have implemented many design standards that can easily be translated to business owners in Albuquerque with regard to conserving energy,” said Jeff Zumwalt, director of UNM’s Physical Plant Department. 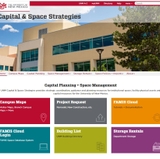