The second year to be fully in person, students from all over the country are at The University of New Mexico for 10 weeks as part of the National Science Foundation’s Research Experiences for Undergraduates (REU) program in the Physics and Astronomy Department.

Nine students out of 149 applicants are currently participating in the program, which is funded through a three-year, $284,687 National Science Foundation (NSF) grant. 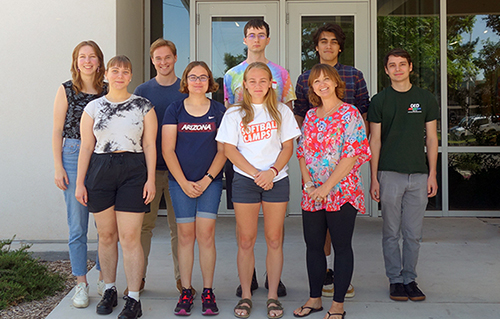 As part of the program, students will be provided with valuable experience including the opportunity to work and conduct research alongside a faculty member in the department on a range of subjects from biophysics to optical sciences to radio astronomy. Students will also hear about different career paths in physics and astronomy, give presentations on their research, go on educational and social outings, and partake in a range of recreational activities and opportunities to experience New Mexico.

The 2022 cohort started in late May and continues through July, with several educational outings planned including trips to the Los Alamos Nuclear Science Center, the Very Large Array, the UNM-led Long Wavelength Array and Magdalena Ridge Observatory. Optional social outings may include a summer barbecue, a trip to the National Museum of Nuclear Science & History, the Rio Grande Nature Center and Sandia Crest.

In addition, the program addresses a regional deficiency since an REU program with a primary focus on physics doesn’t exist in New Mexico, a state with a large proportion of underserved minorities. Part of the program’s focus is on creating opportunities for underserved populations. Five of this year’s nine participants are women.

Program benefits include travel, on-campus housing, a $5,000 stipend and coverage of the cost of educational activities. The cohort started in late May. Additional cohorts in the UNM Physics and Astronomy Department will follow in the the future.

For more information, visit UNM Physics and Astronomy REU at physics.unm.edu/reu or contact Jim Thomas and/or David Dunlap at physreu@unm.edu.