Students in Francisco Uviña’s class, Community and Regional Planning class in the School of Architecture and Planning, recently won the first place award in the poster conference at the Shared Knowledge Conference.

Navida Johnson, Sarah Shaw, Shavone Otero, David Holtkamp and Efrain Machado took a team approach to the course, Planning Issues in Chicano Communities, and to their poster, “Pajarito Revival: A Brief Analysis of the Southwest Mesa.”

Uviña said, “It was a hypothetical project, but we went out to Pajarito Mesa, populated mainly by immigrants. Theirs is both an informal settlement and an informal economy,” he said, noting that signs for pigs for sale and other such methods for conducting business dot the landscape.

According to the students’ research, approximately 1,000 people, representing 113 family households and another 80 husband and wife households, make up the informal community.

“The people aren’t just undocumented immigrants, but legal residents, but there’s no connection to community,” Johnson said.  She added that they are particularly vulnerable.

“There’s a lot of illegal dumping out there – mostly by others, not by those living out there, and a lack of infrastructure,” Otero said. And the residents don’t have a voice to request needed services. “Landowners often took advantage of people, not letting them know that it is illegal to build out there, and once out there, they couldn’t afford to leave,” Otero added. Many have been asked to vacate.

Interestingly, Uviña said that some of the acreage is part of the Pajarito Land Grant. Origins of the land grant can be traced back to 1746, when Spain was the sovereign of New Mexico. According to an article by Elaine Patricia Lujan in the Natural Resources Journal, “…the story of Pajarito highlights the complexity and inconsistencies in U.S. attempts at adjudicating land grant claims and also provides insight into the relationship between successful outcomes in adjudication efforts and social power.”

“The students collected information about what could make a difference at Pajarito and offer solutions. They got a community well a few years ago, which shows signs of community development,” Uviña said.

Pajarito has an active community center, particularly engaged in horses and ranching, he added.

“Design won’t so much solve their problems, but engagement will,” Johnson said, indicating that the residents must traverse many bureaucratic layers from the city, county and Albuquerque Public Schools.

Some of their proposed solutions include a playground in conjunction with the community center, workshops tailored to the needs of the community within the center, programs to teach about sustainable buildings including installation of solar equipment, a community hub to integrate social activities, and a recycling center, “to be used to combat the illegal dumping that takes place there,” Otero said.

“Native peoples lived there, as is seen through the artifacts that have been found, so it is likely that water can be found in the Rio Puerco aquifer,” Johnson said.

The students not only gained knowledge and experience critical to their course and discipline, but they learned how to function as a team in presenting for the Shared Knowledge Conference.

“We learned that collaboration and commitment hold the key to a successful project. Leadership was vital – we each took that role at different points in the process,” Johnson said.

She added that the poster competition was good work to share when seeking a job or applying to graduate school. “Our goal was to be the best individually and collectively as we could be,” Johnson said.

It paid off. The team received $500 for their winning entry. 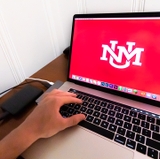