The state-wide contest that’s known to test the mathematics skills of students from around the state was not exempt to the challenges brought forth by CODIV-19. This year’s 53rd annual UNM-PNM Statewide High School Math Contest was held virtually drawing in students from 55 schools across New Mexico.

The UNM-PNM Statewide High School Mathematics Contest is a two-part competition that promotes mathematics education, while rewarding students, teachers and schools for excellence in mathematics. Students in grades seven through 12 have the opportunity to participate, however students in elementary school are also welcomed to compete. Round one was held in October with round two following in February. The contest also featured a public lecture "Why Math?" with Yuliya Gorb of the National Science Foundation. 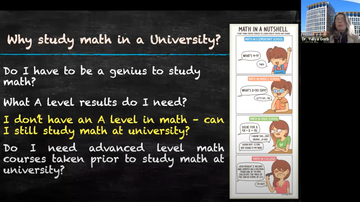 UNM Assistant Professor Jehanzeb Chaudhary and Postdoctoral Fellow Gleb Zhelezov help direct the annual contest and say hosting a virtual event posed significant challenges. The tests were delivered and administered online and most of the correspondence with students and teachers happened via email. Gorb delivered the public lecture via Zoom.

"It's heartwarming to see students participating in such a challenging year, and their ingenuity in coming up with innovative solutions to hard mathematical problems never ceases to amaze me,” Chaudhary said. “Perhaps this was one aspect of the contest which benefitted from being virtual, as it allowed students from all over the state to easily attend the talk from the comfort of their homes.”

“This was the first math contest with many test-takers wearing pajamas, but the most important aspects of the contest did not change, students had fun, exercised their considerable talents on challenging problems and got to interact with a mathematics role model in the annual public lecture,” Zhelezov said.

PNM has played an integral part in ensuring the contest happens each year, having donated more than $370,000 in sponsorship. Some of the company’s more than 1,500 employees attend award ceremonies and witness first-hand how the UNM-PNM Math Contest benefits the community.

"What is more enduring than supporting promising science, engineering and math students in New Mexico who want to add value to our communities? It's all about the students and their families," Roach said.

The winners of the contest get books and cash prizes.