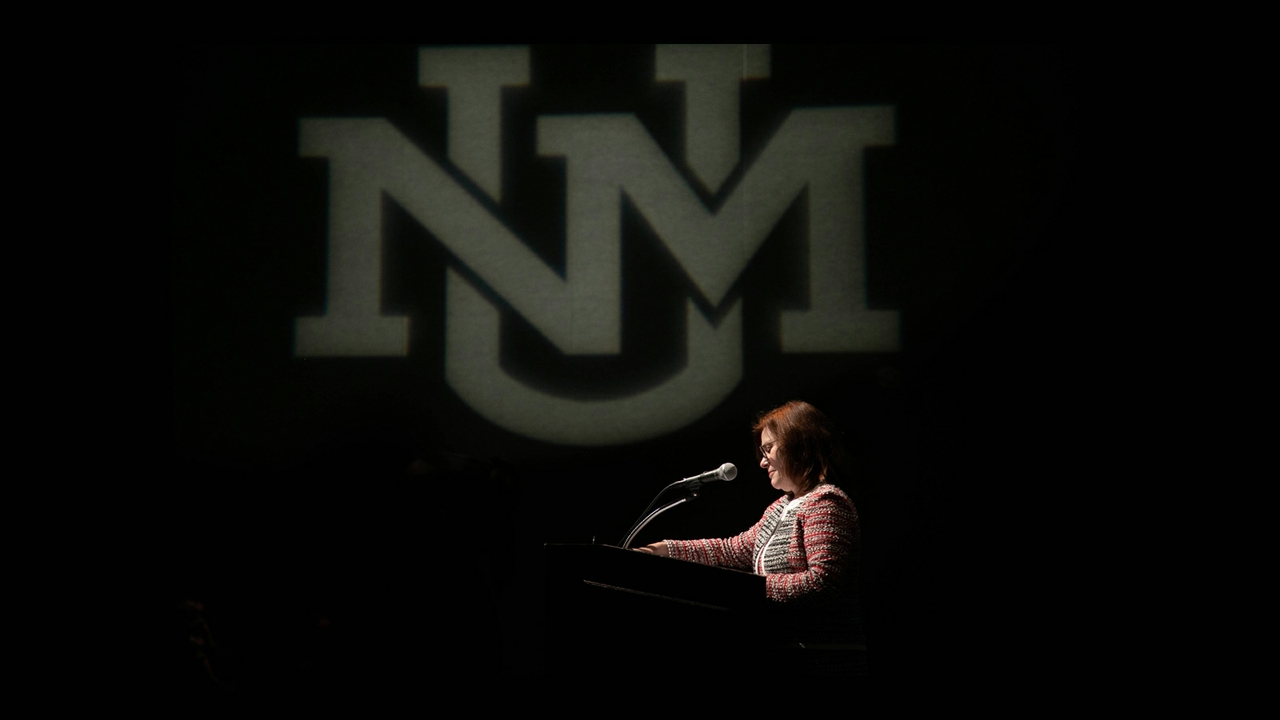 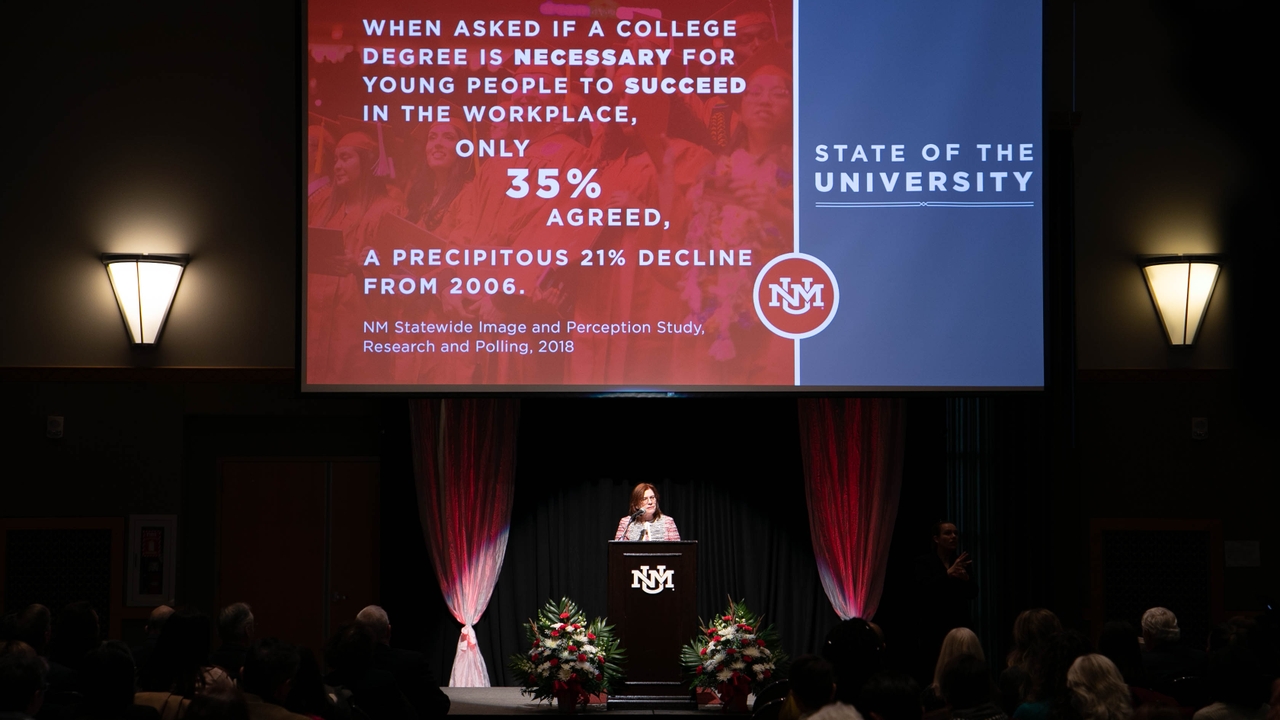 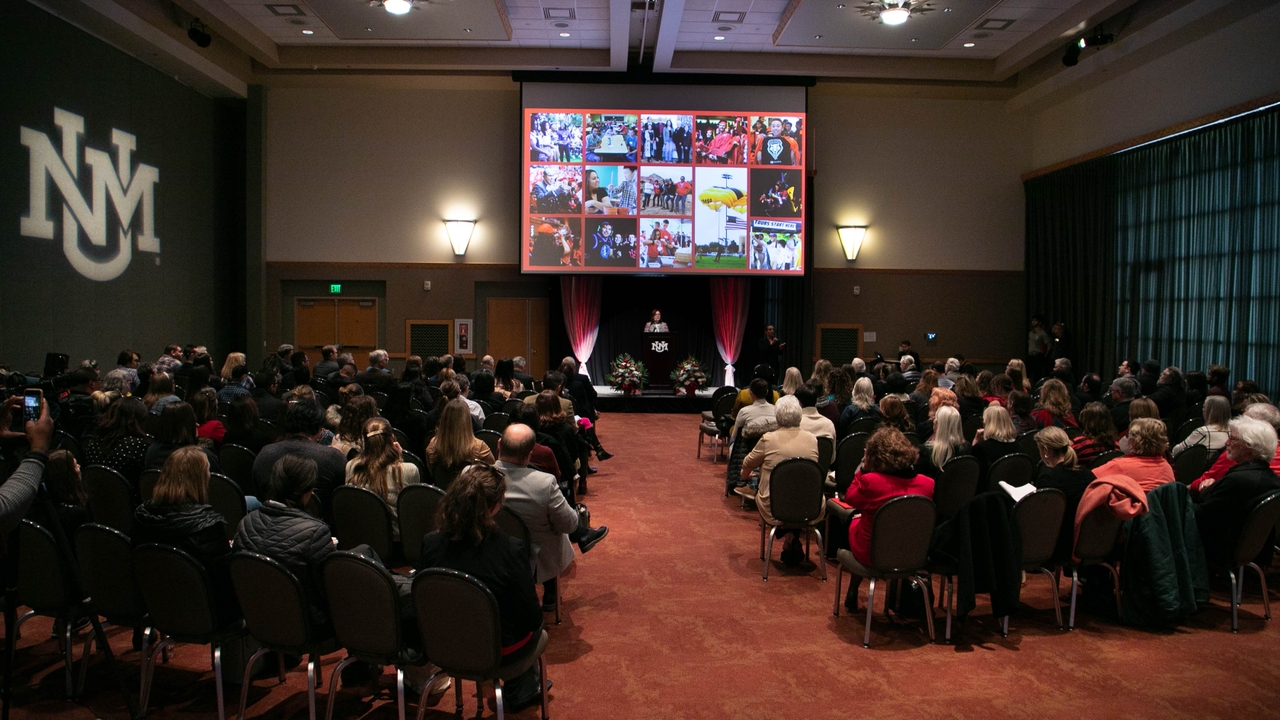 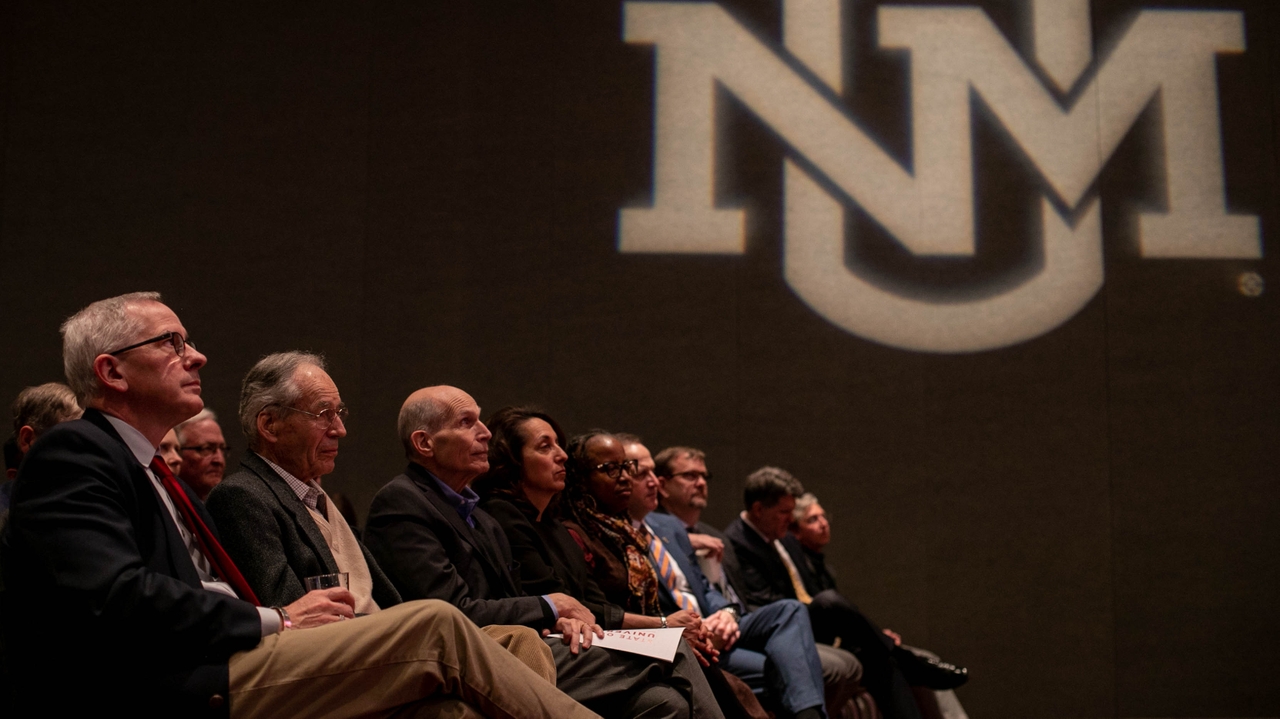 University of New Mexico President Garnett S. Stokes today delivered her second State of the University address, spotlighting ongoing success and accomplishments at the university, while acknowledging that challenges—especially in the form of reduced funding and declining enrollment—still remain.

“Over the past year, we have been shaping a culture of continuous improvement and self-reflection, collaborative problem solving, and proactive response,” Stokes told the audience in a crowded SUB Ballroom. Citing the theme of her speech as “Opportunity Defined,” Stokes noted that, “our success is rooted in opportunities —the opportunities we provide, and the opportunities we pursue.”

Stokes, who will begin her third year as UNM’s 23rd president on March 1, opened her remarks by citing national polling data that have shown declining enthusiasm about the value of a college degree. “I think those surveys reflect an unfair cynicism about higher education,” said Stokes. “Higher education, including research and innovation, has never been more necessary to better understand and improve the world in which we live. At UNM, we are preparing our students to lead and become productive citizens to advance New Mexico, the nation, and the world.”

Laying out the key accomplishments of the past year, Stokes pointed to a continued commitment to diversity, equity, and inclusion as one of her most critical priorities. “Diversity lies at the heart of who we are,” said Stokes. “We’re a state and a university like no other, a healthy blending of different cultures, each of which retains its own unique identity while, at the same time, complementing other cultures to create something entirely new and vibrant. This is the UNM experience.”

Reiterating a commitment to student success, Stokes highlighted changes in degree plans as well as enhanced support services for students “Our role is not simply to grant degrees,” said Stokes, “but to also deliver the best educational tools, programs and overall experience to every student enrolled here.”  Since 2010, 4-year graduation rates have increased by 23 percent—among the highest gains in the nation.

Recognizing the vital role of athletics in connecting the university with community at large, Stokes applauded successful efforts to streamline the Athletics Department and restructure the Lobo Club to “build a culture of high performance and integrity that is integrated into our institutional framework.” She vowed to continue to “look for meaningful ways to be innovative and create a culture of change and accountability.”

Stokes also highlighted key improvements in campus infrastructure, including the nearly-complete $35 million renovation of Johnson Gym, the opening of a new Physics and Astronomy and Interdisciplinary Science (PAIS) Building, as well as plans to construct a surgical tower at UNM Health Sciences. She also outlined recent improvements to campus safety, including the hiring of new police officers and placement of new safety cameras, that have contributed to a reduction in thefts on and around campus.

** State of the University speech begins at the 13:00 minute mark.

Still, Stokes acknowledged that challenges remain, especially as the university, like other state-supported institutions across the nation, face budget reductions and declining enrollment. “Even with much-needed and welcome help from the state, we’re still looking at very real reductions in our funding level, and are working hard to make our way through funding shortfalls,” said Stokes, who continues to fight for increased compensation for faculty and staff. “We need to continue looking for ways to improve efficiency, without compromising our mission.”

Stokes pointed to declining enrollment numbers as the most significant challenge facing the university. “This is more than just a math problem or a budgeting exercise,” she said. “This is about missed opportunities, for the citizens of our state and for the University.” Stokes, who has appointed an Enrollment Task Force to look at ways of increasing enrollment, also sees the need to make college more affordable for all students. “I expect a UNM diploma to not be financially out of reach,” said Stokes. “Opportunity is priceless, but it shouldn’t be cost prohibitive.”

Moving forward, Stokes announced that work will begin shortly on the UNM 2040 Strategic Plan, and asked for the participation of the extended Lobo community. “This is our planning and visioning process, and our opportunity to shape the future of the University of New Mexico.

“I’m excited by what we have achieved so far,” said Stokes, “and I have confidence in what we can achieve together as Lobos.”

Tags: State of the University