The Cooking with Kids Cookbook, by Lynn Walters and Jane Stacey, with Gabrielle Gonzales, is the national winner in the “Children” category for the 2017 Gourmand World Cookbook Awards. The book, published by the University of New Mexico Press in 2016, will now compete in its category alongside winners from other countries for the honor of “Best in the World.”

The results will be announced on May 27-28, 2017 at the annual Gourmand Awards Ceremony in Yantai, China. The awards recognize the best cookbooks, drink books, and food television of the year. 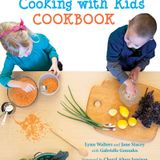 For over 20 years the nonprofit organization Cooking with Kids has educated thousands of children to make healthy eating choices through hands-on learning with fresh, affordable foods from diverse cultures. Written for families to use together, The Cooking with Kids Cookbook includes Cooking with Kids’ most enthusiastically kid-tested dishes, along with tips for engaging children in the kitchen and in the garden.

Walters is the founder of Cooking with Kids. Prior to her work in schools, she was a restaurateur in Santa Fe. Stacey, a graduate of the New York Restaurant School, is the program director at Cooking with Kids. Gonzales is pursuing a Ph.D. in sociology at the University of California, Santa Barbara.

Established in 1929 by the Regents of The University of New Mexico, UNM Press ranks within the top third of publishing houses in the Association of American University Presses (AAUP) and is the fourth largest university press west of the Rocky Mountains in publishing new titles. With over 1,200 titles in print and as a distributor of more than 700 titles for 35 local and regional publishers, the Press is an important element in enhancing the scholarly reputation and worldwide visibility of the university.