Enchantment and Exploitation: The Life and Hard Times of a New Mexico Mountain Range, by William deBuys, won the Richard Harris Award for Publishing Excellence from the New Mexico Book Association (NMBA). A revised and expanded edition of the book was published by The University of New Mexico Press in 2015.

The NMBA Board of Directors presented the award recently to deBuys and UNM Press Director John W. Byram. The award honors a single book annually that embodies outstanding and enduring publishing values in writing, design, production, impact, and influence, reflecting the spirit and talent of New Mexico bookman Richard Harris. 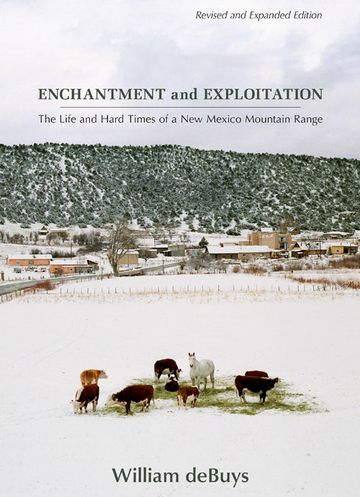 First published by UNM Press in 1985, deBuys’s Enchantment and Exploitation has become a New Mexico classic. It offers a complete account of the relationship between society and environment in the Sangre de Cristo Mountains of northern New Mexico, a region unique in its rich combination of ecological and cultural diversity. Now, more than 30 years later, the revised and expanded edition provides a long-awaited assessment of the quality of the journey that New Mexican society has traveled in that time—and continues to travel.

In a new final chapter deBuys examines ongoing transformations in the mountains’ natural systems—including, most notably, developments related to wildfires—with significant implications for both the land and the people who depend on it. As the climate absorbs the effects of an industrial society, deBuys argues, we can no longer expect the environmental future to be a reiteration of the environmental past.

William deBuys is the author of many books, including The Last Unicorn: A Search for One of Earth’s Rarest Creatures. He lives in northern New Mexico.