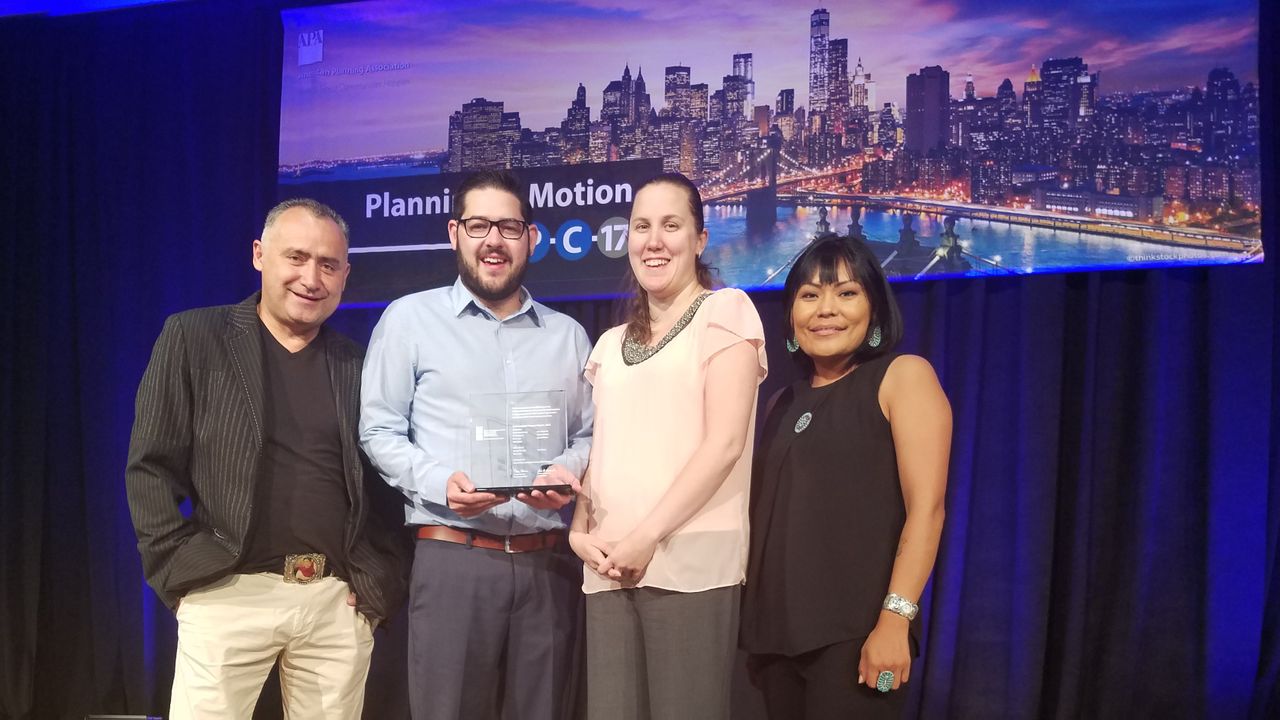 A Community & Regional Planning (CRP) assistant professor at The University of New Mexico’s School of Architecture & Planning is helping to build his student’s resumes’, while expanding awareness of The University.

Moises Gonzales recently traveled to New York City with some of his current and former students to collect the 2017 American Planning Association student project award, given to the best “contribution to contemporary issues in planning.”

Andrew Webb, former planner for the City of Albuquerque, submitted the project for award consideration. Now a senior city planner in Denver, Webb wrote, “I thought it was a timely, well-researched and effective example of applied planning.”

Because this was a juried award, it distinguished UNM’s CRP program as competitive among other planning schools.

“This is the first time we’ve won national recognition from the American Institute of Certified Planners (AICP),” Gonzales said. “Our achievement demonstrates that we provide the best planning education possible. UNM is affordable, but doesn’t compromise quality.”

He also said winning the award will help with recruitment efforts.

“In so many cases – including my own experiences in undergraduate and graduate school – student projects tend to be somewhat detached from the real interplay between developers/property owners, community members and regulators that shapes the built environment,” he said. “This project got students involved in the early stages of a real policy debate as it was playing out, and I was extremely impressed with the rigor of their analyses, understanding of a controversial topic and thoughtful recommendations.” 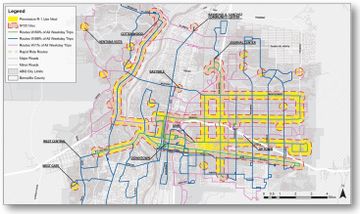 Gonzales undertook the project while teaching a master’s in CRP at City Lab, a joint venture between the UNM School of Architecture & Planning and the City of Albuquerque. The students use the city itself, with a studio space in downtown Albuquerque, to research, explore and propose ideas beneficial to the students’ learning and the city’s development.

The UNM project, “SDU + U” studied secondary dwelling units. It was used to inform and advise city policymakers – through scientific spatial analysis – the rationale behind the need to include secondary dwelling units (SDUs) within the R-1 single family zones as a permitted use. Currently, the city’s zoning ordinance doesn’t allow for SDUs in R-1 zones, with R-1 zoning the most prevalent land use in the City of Albuquerque.

SDUs are defined as an additional dwelling until established in conjunction with a single family dwelling unit on the same lot. The SDU sits on a permanent foundation and includes a kitchen, sleeping quarters and a full bathroom. They can exist within the primary dwelling, generally by converting existing space like an attic or a basement. They can also be attached to the house, perhaps converted out of a garage, or on the side of or behind the house. SDUs can also be a freestanding unit, separate from the house, but on the same lot as the house.

The UNM Bureau of Business and Economic Research (BBER) reported in 2015 that Albuquerque’s economy remains “in a recession-like condition with stagnant job growth and poor economic stability.” Forecasts for Albuquerque are well below the national trend, including research that shows that New Mexico will not reach pre-recession employment levels until the end of 2017.

Another reason that SDUs make sense for Albuquerque is that millennials are a driving force behind the economic geography of jobs and housing. They prefer a movement toward city centers and a lifestyle with easy access to employment, transportation and housing.

“Albuquerque has been in a five-year decline in its population of millennials as of 2015,” Gonzales said, adding that millennials are finding better job prospects elsewhere. That means the state’s own millennials are leaving and New Mexico isn’t attracting others.

Gonzales and his students noted that establishing SDUs in activity centers – downtown, uptown, Nob Hill and UNM would be attractive to potential SDU residents because of the existing access to retail, food sales, personal services and transportation.

“Once density from SDUs and corner stores has created stabilization within the neighborhood economy, focus can be shifted to developing activity centers and areas with economic potential,” the group’s report states.

“This was the only studio that actively engaged physical planning,” Gonzales said.

Gonzales’ students presented their work to the Environmental Planning Commission (EPC), the city’s planning board, as well as to the City Council.

“Their passionate and disarming presentations to both groups offered a much-needed alternative perspective on the benefits of targeted, small-scale density increases and the need for quality rental housing,” Webb wrote. “Several EPC commissioners and city councilors later told me that the student presentations gave them a completely new understanding of the issue and that they hoped it could potentially be revisited in the future as opinions evolve.”