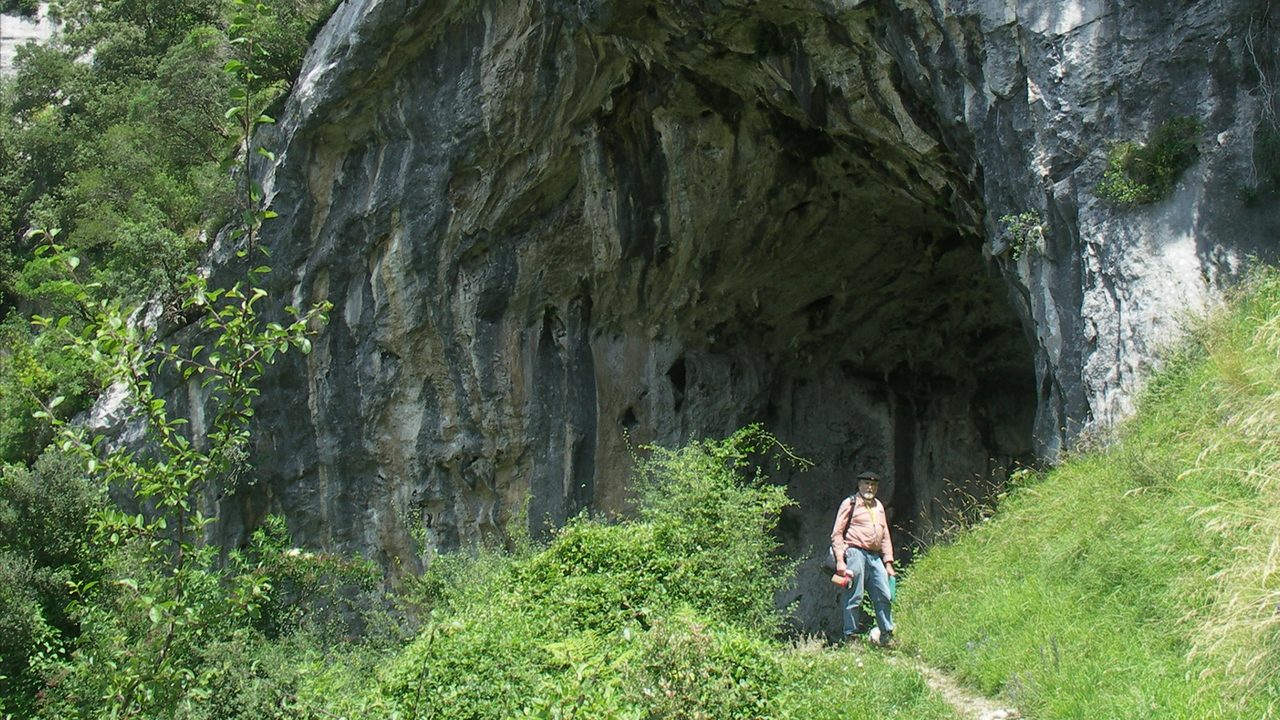 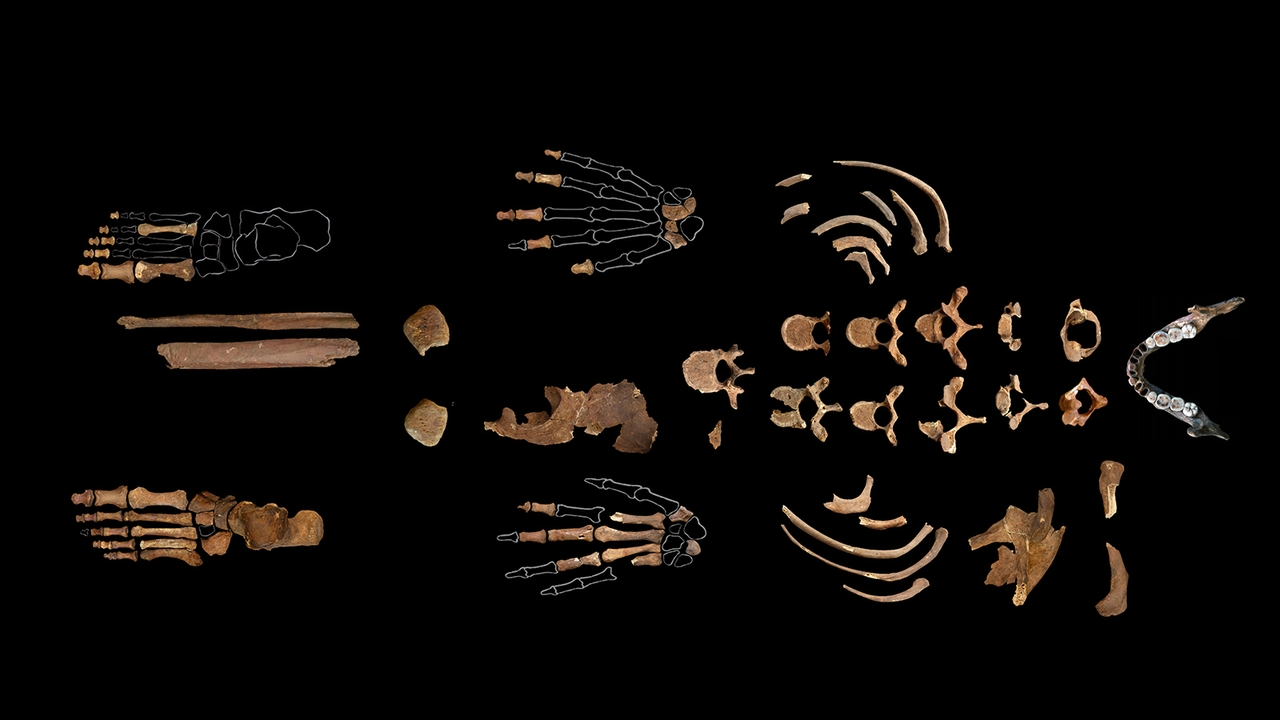 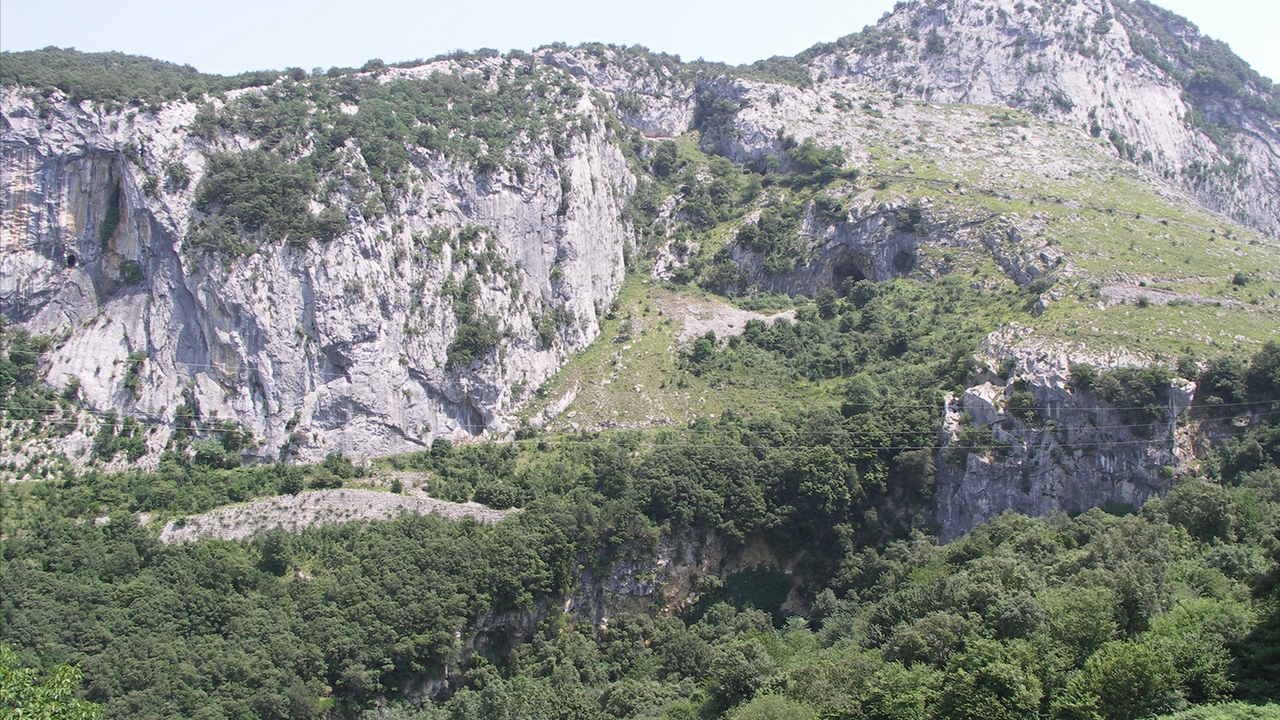 Around 19,000 years ago, a woman  ̶  possibly a woman of some special status  ̶  from a group of hunter-gatherers died and was buried in El Mirón Cave in northern Spain. In 1996, archaeologists started exploring the cave, finding abundant evidence of prehistoric people. In 2010 Lawrence Straus, Emeritus Leslie Spier Distinguished Professor at The University of New Mexico, and a Spanish student found the woman’s remains, including her jaw, after Straus had what he described as “a hunch” to dig in an area behind an engraved block at the back of the cave’s huge vestibule. 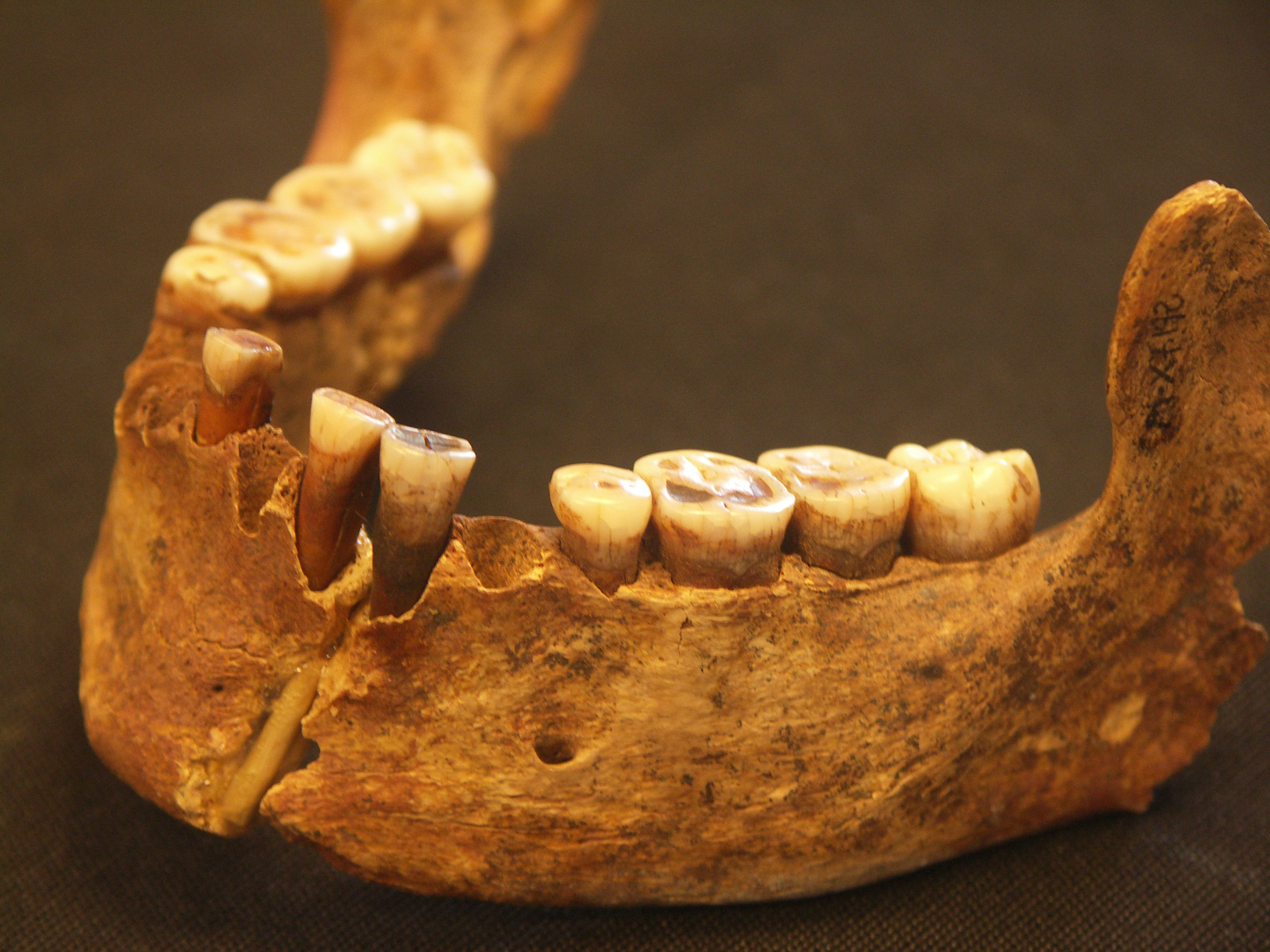 The excavation was directed by Straus and Manuel Gonzalez Morales of the Universidad de Cantabria in Santander between 1996-2013 with the participation of many students from UNM, Cantabria and universities around the world. They found El Mirón has a cultural sequence ranging from the late Middle Paleolithic to the Bronze Age.

The prehistoric woman’s age is estimated to be 35-40 years at death and her bones were coated with non-local ochre, a red, iron oxide pigment, earning her the moniker the Red Lady of El Mirón. Since that finding, the Red Lady has continued to offer a torrent of information and data to archaeologists and bioanthropologists   ̶  often by chance, according to Straus.

The Magdalenian Culture began in southwest France and Cantabrian Spain and eventually spread throughout most of western and central Europe, from Portugal to Poland. It is of particular interest to Straus and other archeologists because of its many sites rich in artifacts, personal ornaments, faunal remains, and works of portable and rock art.

Straus believes that the human population had barely survived in southern Europe during the worst of the Ice Age climate crisis around 25-21,000 years ago, before the Magdalenian. DNA from the El Mirón Red Lady burial and another site in Italy indicate that late-glacial populations met and mixed before the recolonization of northern Europe as temperatures warmed again.

In 2011, Straus viewed a poster at a meeting of the Paleoanthropology Society on the recovery of prehistoric dietary information from dental calculus, or tartar such as a dental technician scrapes off teeth, by Robert Power of the Max Planck Institute in Germany. After sampling from the Red Lady’s teeth, Power found evidence that she had eaten plants and mushrooms—in addition to the meat and fish “which we used to think of as the sole basis of human diet during the Last Ice Age in Europe,” Straus noted. The results of this and many other findings were published in a monograph on the Red Lady in 2015.

Straus, on a whim, attended a talk by Christina Warinner from the Max Planck Institute and Harvard University at an American Anthropological Association meeting in 2016, in which she described the extraction of DNA from bacteria in dental calculus. Meeting with her after the session, Straus interested her in obtaining a sample from Power and eventually she and her team extracted the DNA of bacteria from the Red Lady as part of a vast study of the oral biome of apes and living and fossil humans.

The study was published this week in PNAS in a sweeping article, The evolution and changing ecology of the African hominid oral microbiome, of which Straus, Warinner, and Power are among the many co-authors. One of many surprising results was that the Red Lady shared some of the same bacterial strains as the Neanderthals of Europe, who had gone extinct some 20,000 years earlier. And then, 5,000 years after the Red Lady, those bacteria went extinct. The oral biome is the bacteria that live in mouths, in this case, those of the great apes, Neanderthals, and Upper Paleolithic and modern humans, Straus explained.

This is additional proof of Neanderthal-Homo sapiens interbreeding and later of replacement of the European human population by newcomers from the Near East at the end of the Ice Age, something that had already come out in recent articles on the genome of the Red Lady and other later Upper Paleolithic humans from Europe, Straus said.

“Although humans share many oral bacteria with other primates, the oral microbiomes of humans and Neanderthals are particularly similar. Nevertheless, there are a few small differences, mostly at the level of bacterial strains. When the researchers took a closer look at these differences, they found that ancient humans living in Ice Age Europe, such as the Red Lady of El Mirón, shared some bacterial strains with Neanderthals,” Warinner explained. “Because the oral microbiome is typically acquired in early childhood from caregivers, this sharing may reflect earlier human-Neanderthal pairings and child-rearing, as has also been already indicated by the discovery of Neanderthal DNA in ancient and modern human genomes. Researchers found that Neanderthal-like bacterial strains were no longer found in humans after ca. 14,000 years ago, a period during which there was substantial population turnover in Europe at the end of the last Ice Age.”

It was the Mirón Red Lady that supplied the DNA from dental calculus that revealed that Neanderthal oral biome bacteria had survived the demise of that subspecies of Homo sapiens for about 20,000 years, but then the bacteria disappeared from modern humans at the end of the Ice Age a few thousand years later, Straus noted.

Straus, often in collaboration with other UNM researchers, continues to publish findings from El Mirón.

In Assessing the chronostratigraphy of El Mirón Cave, Cantabrian Spain, published in the journal Radiocarbon in March, UNM adjunct assistant professor Rachel Hopkins and Straus methodically assess and analyze the 93 radiocarbon dates from the many layers in the cave that span the period between about 48,000 and 4000 years ago, one of the longest series from any European site.

Straus will have an article about the Magdalenian as a pan-European network of societies phenomenon in a collection to be published soon by the Universidad de Zaragoza. In the same book, UNM adjunct assistant professor Lisa Fontes and Straus have an article about stone raw material procurement in the Magdalenian at the time of the Red Lady's burial and Straus and colleagues have an article about an engraved scallop shell from a 23,000-year-old Solutrean level of the cave.  Other new studies of El Mirón Magdalenian artifact assemblages by Straus and colleague González Morales are upcoming in Palevol, a proceeding series of the Academy of Sciences in Paris and in a volume to be published by the Universidad de Cantabria.

Carvalho and Professor Nuno Bicho of the Universidad do Algarve in Portugal guest-edited a special issue of the Journal of Quaternary Science on Neanderthal refugia, which contains three separate articles by her, Jones, and Straus examining the idea that the last Neanderthals survived on the southern European peninsulas later than elsewhere in Eurasia.