UNM professor developing imaging to save lives after fires

When fires break out, it’s not always flames that do the only damage – sometimes the scorched earth can cause even more destruction in the form of landslides. That’s why Chris Lippitt, assistant professor in the Department of Geography and Environmental Studies at The University of New Mexico, is working on a project that would give emergency management crews state-of-the-art imaging technology to mitigate potential slides before they happen.

Lippitt and his research group, GIScience for Environmental Management (GEM), are working with the U.S. Army Corps of Engineers Albuquerque District and the New Mexico Wing Civil Air Patrol on a device that attaches to airplanes and collects detailed three-dimensional images of canyons and washes to determine which areas are most likely to slide.

“For high risk areas, the plan would be to collect information before anything happens,” explained Lippitt. “Then, if a fire or flood happens, we can collect data immediately after and look at how things are changing across the entire area. We’d be able to say how much soil is lost and where mitigation efforts would be most effective.” 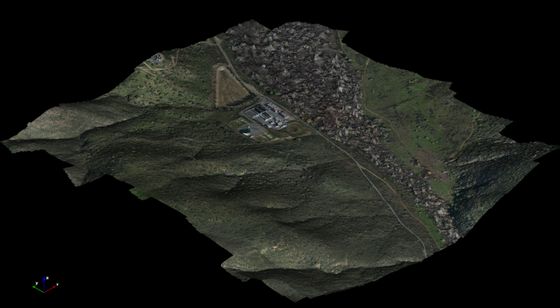 A 3-dimensional image of a valley.

The idea is help prevent catastrophic landslides, like those that have happened at Bandelier National Monument, Santa Clara Pueblo and at the Dixon Apple Orchard, causing an incredible amount of damage to property and land – along with the potential to hurt or even kill people nearby.

“The most exciting thing for me is that I’m working with a diverse group of specialists and professionals and we’re doing things that are going to be operationalized and make a real difference in everyday people’s lives.” Lippitt said. “It’s not a stretch to think that this technology will save property and lives here in New Mexico and elsewhere.” 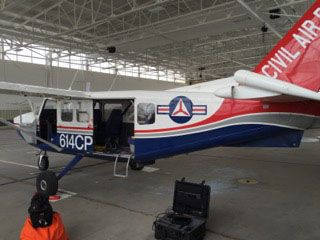 So far, Lippitt and his team have built and attached a device to one of the Civil Air Patrol’s aircrafts. The color infrared imaging system is essentially a very advanced camera that can not only take super-high resolution images but can also process those images into three-dimensional surface models. Those models can then provide a slew of information to engineers and emergency management crews who can use them to determine where to reinforce areas of land.

“Once the regulatory environment for unmanned systems (drones) opens up, we hope to pre-deploy sensors so they can monitor these remote areas on demand and as often as needed” Lippitt said.

Lippitt’s research group has developed the device using affordable but state-of-the-art technology such that the approach can be readily replicated nation-wide. The technology is being developed and tested in New Mexico, but the intent is to save money, property and lives across the country.

“New Mexico really is a pilot for the rest of the country,” he said. “The Civil Air Patrol operates thousands of aircraft across the U.S. and what we’re doing here can be replicated nationwide very quickly.”

In line with his research goals, Lippitt also heads a UNM center called ASPIRE – the Advancement of Spatial Informatics Research & Education. The center is slated to be part of the interdisciplinary side of the new Physics, Astronomy & Interdisciplinary Science (PAIS) facility scheduled to be built on the UNM campus in the coming years.

PAIS, a new state-of-the-art high-research center, will be constructed at the site of an existing City of Albuquerque water reservoir, just north of Central Ave. between Yale Blvd. and Cornell Dr. The 137,000 sq. foot facility will have research labs, classrooms, office space and modern infrastructure to support projects being done by a variety of scientists from several different disciplines across campus.

Lippitt says the new facility will be a big step forward for his group by providing them a work space that allows researchers to continue to make progress on a variety of projects. Right now, he says the current space limits their ability to build and test certain devices. Also, given the nature of their work, the current computing infrastructure does not meet their needs.

“The research we’re doing is extremely computationally intensive,” he explained. “We have tens of thousands of dollars of server equipment in a closet and that’s only going to continue to expand.” 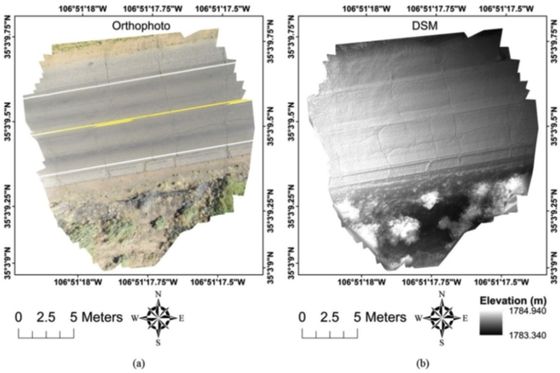 An example of the type of imagery and 3-dimensional models produced by the system.

Aside from the tangible benefits a new state-of-the-art building will bring to research projects happening across campus, PAIS will also impacts students in a variety of ways, according to Lippitt.

“For our geography students, PAIS is going to be huge. It means a professional space and interacting with other scientists,” he said. “For UNM students at large, I think being exposed to an environment where science is being conducted in a problem oriented way rather than a discipline oriented way is huge.”

And for Lippitt and many other researchers on campus, it’s that interdisciplinary approach that has them excited about PAIS and what it means for the future of UNM.

“The big problems left in the world, don’t fall within one discipline. The big problems are left in the cracks between them,” he said. “Pick a topic; water quality, climate change, urban planning, energy, anything. All of them require thinking about humans, chemistry, physics, sensing technology, computer science.” 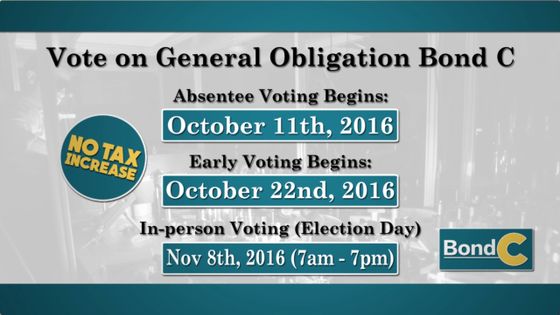 Along with funding projects on UNM’s main and branch campuses, Bond C will also provide millions of dollars for higher education institutions across the state, all without raising taxes. Additionally, the investment by voters will have a big impact on the state’s economy and is projected to create more than 1,300 new jobs – a huge boom to families across the state and to researchers at the University.