The American Institute for Medical and Biological Engineering (AIMBE) recently announced the induction of Jeremy Edwards, professor of Chemistry and Chemical Biology at The University of New Mexico to its College of Fellows.

College membership honors those who have made outstanding contributions to "engineering and medicine research, practice, or education” and to "the pioneering of new and developing fields of technology, making major advancements in traditional fields of medical and biological engineering, or developing/implementing innovative approaches to bioengineering education."

Edwards was nominated, reviewed and elected by peers and members of the College of Fellows for “pioneering contributions to genome-scale science by developing novel DNA sequencing methods and computational models of phenotypic functions.” 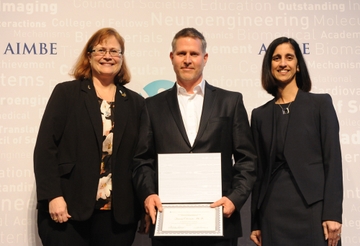 Jeremy Edwards, professor of Chemistry and Chemical Biology, was recently inducted into the American Institute for Medical and Biological Engineering College of Fellows.

“It is a great honor to be recognized by my peers to be in the top-two percent of my field. I think the recognition is due to my continued contributions to the field in a number of areas. My work on novel DNA sequencing technologies has contributed to a revolution in medicine and is enabling new precision medicine strategies.

Edwards’ research interests are centered on two areas including spatial-temporal modeling of signaling networks and functional genomics tool development. The development of spatially realistic simulations helps in understanding the importance of spatial regulation in signal transduction.

Ongoing research will provide an unprecedented level of detail regarding the changing topography of membrane organization and contribute new insight into the nature and assembly of membrane micro-domains controlling signal transduction and membrane trafficking in eukaryotic cells.

A formal induction ceremony was held during the recent AIMBE Annual Meeting at the National Academy of Sciences in Washington, D.C. last month. Edwards was inducted along with 156 colleagues who make up the AIMBE College of Fellows Class of 2019.

While most AIMBE Fellows hail from the United States, the College of Fellows has inducted Fellows representing 30 countries. AIMBE Fellows are employed in academia, industry, clinical practice and government.