Along with his faculty position in the Department of Political Science, Sanchez is also the executive director of UNM’s Robert Wood Johnson Foundation Center for Health Policy, the director of research for Latino Decisions, and is a well known expert on Hispanic policies and trends in the United States.

Sanchez was the only academic to give an opening speech at this year’s CHCI conference in Washington D.C. In his presentation, he laid out Latino demographic growth in the U.S., what it’s projected to look like in the future, and why that matters to electoral politics and policy making.

“I was able to to draw from data that shows how Latino influence across specific states is growing electorally and what kind of policy impact that could have,” said Sanchez. “Also, I spoke about the untapped potential of millions of Latinos who are eligible to vote, but aren’t registered, and why that could be a tipping point for Latino policies.”

Approximately 13.1 million Latinos are expected to vote in 2016 with the number of eligible Latino voters projected to double in 20 years, according to Sanchez. It’s this growth, he says, that makes it important to address policy issues facing the Latino community.

Sanchez said he was thrilled to receive an invitation to speak from New Mexico Congresswoman Michelle Lujan Grisham, but admits he wasn’t aware of the magnitude of the platform until he arrived in D.C.

“I didn’t realize how important this conference would be for UNM or for myself until I was on stage and I realized the audience I had access to,” he said. “It was a great opportunity for the university.”

Aside from speaking directly to lawmakers, Sanchez said there was also a variety of high level, Hispanic officials from an array of private companies, and numerous undergraduate and graduate students from across the U.S. who hold fellowships from CHCI. Sanchez believes the exposure UNM received at the conference will give the university a competitive edge when it comes to applying for certain research funding and for recruiting top level graduate students from outside New Mexico. 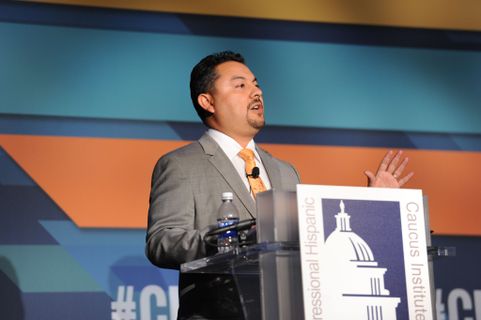 Another UNM community member was also present at the conference. Meriah Heredia-Griego is the executive director of UNM’s Center for Education Policy Research. Heredia-Griego was also recently named to the CHCI Advisory Council.

Sanchez said UNM’s part in this national Hispanic organization could mean great things for the future of the university that is a congressionally recognized Hispanic serving institution.

“UNM is uniquely positioned to be the leader of Latino focused research across several areas, including politics and policy. This opportunity to showcase this expertise on behalf of UNM is an example of our potential at UNM to become the go to place for data and research on the increasingly important Latino population,” Sanchez said.

To see the opening speech given by Sanchez at the Congressional Hispanic Caucus Institute’s Policy Conference, click here.