The University of New Mexico and the Mexican Consulate are helping students of Mexican origin succeed in higher education.

UNM President Robert Frank and Consul of Mexico Efren Leyba signed a Memorandum of Understanding at a ceremony on the main campus, Tuesday. It represents a formal agreement of continued collaboration between the two groups.

Following the signing, Consul Leyba joined UNM Vice President of Student Affairs Cheo Torres in passing out checks from the IME-Becas Scholarship Program, which is funded by the Government of Mexico. 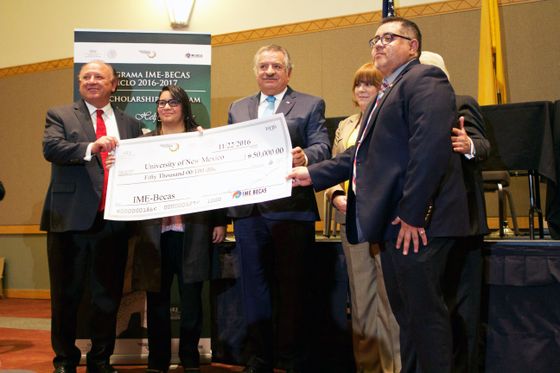 The check presentation from the IME-Becas Scholarship Program, which is funded by the Government of Mexico.

Yazmin Irazoqui-Ruiz, a former scholarship recipient, graduated from UNM in 2015 with a bachelor’s degree and is now a second-year medical student. Her mother is a doctor in Mexico and Irazoqui-Ruiz says receiving the scholarship was a big step in helping her follow her dream of also being a physician.

Irazoqui-Ruiz says the IME-Becas scholarship was one of the only ones she received, and it pays for about 10 percent of her tuition.

“It’s a huge relief financially, because many of us are immigrant children and our families don’t have the means to be able to assist us with our tuition,” she said.

She believes the scholarship allows students to focus more on their studies, instead of spending their time working.

“A lot of us work on top of school,” she said. “Being able to work on our studies a little more is going to be a huge stress relief.”

During the ceremony, attendees were entertained by live music from the Washington Middle School Mariachi. UNM Students also presented Consul Leyba with a plaque, thanking him for his continued support of the University.