A new article in the journal “Nature” this week, "The genetic history of Ice Age Europe" paints the outlines of a group of people who began to populate the land we know as modern day Europe starting 45,000 years ago. The article pieces together the work of researchers from dozens of institutions and universities to begin describing the far distant ancestors of many Americans.

The principal specialists in ancient DNA who did the analyses include Qiaomei Fu, currently of the Chinese Academy of Sciences; David Reich from Harvard University; Svante Paabo from the Max Planck Institute of Evolutionary Anthropology in Leipzig and Johannes Krause from the University of Tubingen. They worked with human specimens provided by archaeologists who have excavated sites throughout Europe. Harvard University Medical School published a detailed story on the "Nature" article.

The University of New Mexico’s Leslie Spier Distinguished Professor of Anthropology Lawrence Straus contributed material and information about research he has done over the past two decades at El Mirón cave in Cantabria, Spain. Straus and his colleague from the Universidad de Cantabria Manuel González Morales, excavated a ritual, early Magdalenian-age burial in the cave and with many collaborating specialists, have published extensively about “The Red Lady of El Mirón.” 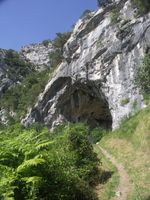 The Red Lady of El Mirón was part of a group of people who inhabited the northern portion of the Iberian Peninsula about 19,000 years ago. Straus’ work has shown that she and her group lived as hunter-gatherers, eating red deer, ibex, salmon, and mushrooms, often using El Mirón cave for shelter. She is the first burial of Magdalenian age ever to be found in Iberia.

Despite 150 years of research on the Upper Paleolithic, most of what is known in detail about humans inhabiting Europe is less than 8,500 years old, because it was in the Neolithic that people began farming, were less mobile and created cemeteries.

To begin with, the population originally had about six percent blood from Neanderthals. That proportion quickly went down to about two percent. That is comparable to present day Europeans. The research shows that Europeans who lived between 37,000 and 14,000 years ago didn’t mix with other groups including Neanderthals.

This research sorts people with similar DNA into specific groups. Researchers found two genetically distinct groups. One group almost died out only to be replaced by a second group for around 15,000 years. But then genetic material from the first group reappears. The group is named the “El Mirón Cluster,” because the Red Lady is the oldest and southernmost member of the group in the sample studied here. It appears the first group then spread from the southwest across most of present day Europe as the glaciers and polar deserts which had covered most of the continent finally began to retreat. That was an unexpected sequence of events the researchers are struggling to explain. 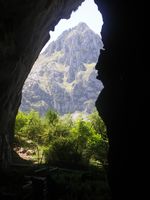 Inside El Miron Cave looking out.

The genetic information on the “ancestors” of the Red Lady from a cave in Belgium and on the “descendent” El Miron Cluster (from the Red Lady and, later in the Magdalenian, from sites in Northeast France, Belgium and Germany) support Straus’s long-time archaeologically-based argument for a southward contraction of the human range into a refugium in southern France and Iberia during the Last Glacial Maximum (25-20,000 years ago) and then a re-expansion of that range into NW Europe during the Late Glacial period.

Straus has not only excavated El Mirón and other sites dating the to the pre-refugium, refugium and post-refugium periods in Spain, but also has excavated relevant sites in France and Belgium. His discovery of the Red Lady, and as a consequence, his participation in this sweeping study of this genetic history of Ice Age Europe constitute unexpected DNA confirmation of a theory he had been defending for decades with evidence from sites, artifacts and radiocarbon dates.

Until recently, reconstruction of the genetic history had only been attempted on the basis of the DNA of living populations, not on actual ancient DNA.

Other DNA studies of bones from El Mirón which were the basis of separate articles in “Molecular Ecology,” show that the modern populations of red deer (elk) and Atlantic salmon in northern Europe are descended from populations of these animals that had also taken refuge in Spain during the last Glacial Maximum and re-colonized the north during the Late and Post-glacial periods. Those animals and fish were exploited by the people living in the cave.

There is another unexpected finding reported in the Nature article. About 14,000 years ago a genetic relationship between Europeans of the El Mirón genetic cluster and people from the Near East appears in the terminal Upper Paleolithic population. The shift occurred during the first major warming period near the end of the Pleistocene.

The researchers believe that the changing climate may have allowed people of a third group to migrate from the Near East into Europe before the spread of agriculture after the end of the Ice Age. 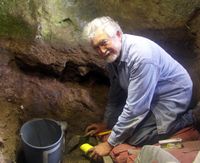 Because there are a limited number of samples, it’s not clear precisely what happened as populations came together and mixed. It will take years to fill in the gaps as more remains are discovered and analyzed. The research suggests one other finding – that a warming climate played a major role in where populations moved through Europe and which long-separated populations were on the move and in contact.

Straus’ and Gonzalez Morales’ excavation of the Red Lady of El Mirón was funded by the L.S.B. Leakey Foundation, the Government of Cantabria, UNM, and the Fund for Stone Age Research in the UNM Foundation (J. and R. Auel, principal donors.)