Bolivia, one of the poorest nations in the Americas, is currently experiencing the worst rainy season in decades, with disastrous floods and mudslides destroying roads and communities in the Amazon basin. Indigenous Tsimane (pronounced chi-MAH-nay) forager-farmers, who reside in villages on the outskirts of local market towns, are among those most affected. They lack electricity and public health infrastructure; and their subsistence lifestyle has been completely decimated by the flooding. Thousands have been displaced and many are now living in impromptu refugee camps.

Matt Schwartz, a UNM graduate student in the anthropology department, is currently in Bolivia helping to assess the damage of the flooding and coordinate relief efforts. Matt is joined by Benjamin Trumble, a postdoctoral researcher from UC-Santa Barbara, and by Bolivians affiliated with the UNM and UCSB-based Tsimane Health and Life History Project.

The project began in 2002 under the joint directorship of anthropologists Hillard Kaplan, UNM, and Michael Gurven, UC Santa Barbara. The project is aimed at understanding the evolution of human development, health, longevity and sociality through the application of life history theory.

Bolivia's government recently declared a state of national emergency, allocating at least $1 million for flood victims. Forty Bolivians have died since the floods began and 21,000 families have been forced from their homes over the past two months. The rains are estimated to continue through mid-March, and the Bolivian government is estimating that hundreds of thousands will be displaced.

UNM Ph.D. student, Helen Davis, has worked on the Tsimane Project as well. “When events of this nature happen,” she said, “you have to set aside academic pursuits and focus on immediate relief efforts.” 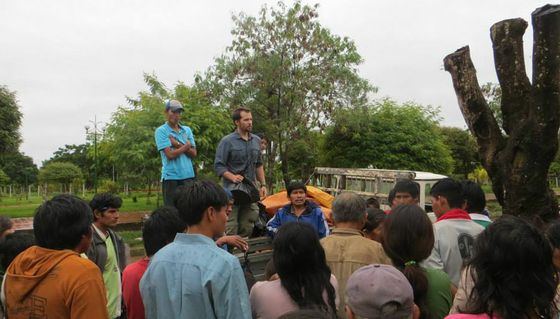 Volunteers hand out donations to those in need after severe flooding in Bolivia.

Davis said that Ben and Matt are on the ground working tirelessly with the project’s medical team to help people locate family members, obtain critical medicine and food and rescue stranded families. “The project has been investing time and money to get food, supplies and medical care to the displaced,” she said, “in an effort to try and fill the needed gaps and assist regional aid workers.”

Trumble recently shared his account of the devastation via email. “We entered the community through what used to be a trail to the river, but is now more river. The Maniqui has widened by several kilometers. We traversed the river-road in a 15 foot aluminum hulled boat with an outboard motor. La Cruz is one of the most acculturated of the communities, and they have a decent dirt road, fenced in by barbed wire. Now the barbed wire fence was the final resting place for chickens, pigs, dogs and peccary that were unlucky enough to get trapped in the wire and drowned by the current. The smell of death was everywhere. The village was a ghost town, chest high water in all of the houses we passed.”

In the U.S., students affiliated with the project created the Tsimane Flood Relief fund to raise money to buy food and medicine, clothing, toilet paper and anything else people need while staying in refugee camps.

“We are all trying to raise funds and awareness,” Davis said. “People need help, and they will continue to need aid when the flooding subsides and rebuilding begins.”

If you wish to donate, visit Tsimane Flood Relief. For more information on the project, contact Helen Davis at hdavis81@unm.edu

To witness the devastation, view the slideshow depicting the Bolivian floods.