Victor Polyak, senior research scientist in the Department of Earth and Planetary Sciences at UNM, was recently awarded the National Speleological Society (NSS) Science award for his dedication to the research of caves. Polyak manages the UNM Radiogenic Isotope Laboratory for Yemane Asmerom, professor of geochemistry.

The award recognizes an NSS member who has shown impressive commitment to the scientific study of caves. Polyak has been a member of the NSS since 1986.

“I’m honored to be awarded the NSS Science Award. It comes from my fellow cavers and scientists. It was a lot of fun receiving the award,” Polyak said.

The citation reads in part:
“[The] 2015 Science Award winner is characterized as a thorough, meticulous scientist who is willing to help other researchers and has been a great mentor to 10s of graduate students.

“A Master’s and doctorate at Texas Tech University resulted in some of the most in-depth studies of cave minerals in the world.  His dissertation work produced the age of formation of Carlsbad Cavern and Lechuguilla Cave, two New Mexico caves that are among the most famous caves in the world.  While in Lubbock, Texas he co-started the Lubbock Area Grotto, a regional caver’s organization that is affiliated with the NSS. 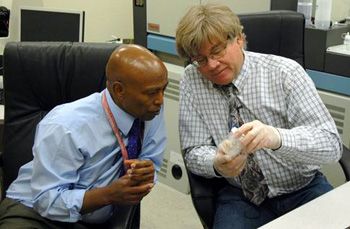 “Another research interest is the timing of growth of speleothems from caves of Mallorca, Spain that are sea level high-stand indicators.  This research is providing one of the most accurate sea level records for the last interglacial period, a period that extended from 127,000 to 75,000 years ago.

Polyak also works in the area landscape evolution and has spent 16 years studying Grand Canyon caves, and is using the ages of water-table-type speleothems from those caves to make important contributions to the evolution of Grand Canyon.

He and his wife Paula Provencio, part-time UNM-EPS employee, have had a long-standing interest in sulfur-related cave genesis, cave minerals and lava tube cave features.

Additionally, Polyak has numerous publications that come from his research on New Mexico and Arizona caves, helping to make him the perfect candidate for the award.

"We are lucky to have Dr. Polyak at UNM," said Asmerom. "Victor has this rare combination of excellence and humility. He is one of the most accomplished scientists at UNM. Our collaboration over the last 15 years has been both fruitful and truly enjoyable."

The NSS Board of Governors approves those nominated for the award after recommendation from the Awards Committee. The candidate must also be a good standing member two years prior to becoming a candidate.

To learn more about the award or to see past recipients, visit caves.org.