Over the past century or so, a large body of literature exists from both human and animal early-experience studies confirming what seems to be intuitive today that both maternal and non-maternal environments affect the development of infants. What remains elusive is whether empirically, knowing the influence of the mother alone or the non-maternal environment alone would allow one to infer their joint impact.

Professor Akaysha Tang, Department of Psychology and Department of Neurosciences at The University of New Mexico, led a multi-institutional effort in a cross lifespan longitudinal study of physical development using the rat as model system.

The team of researchers from University of New Mexico, University of Maryland, Columbia University, and Rockefeller University recently reported, in the Proceedings of the National Academy of Sciences USA (PNAS), that physical development, particularly early growth, can be both enhanced or impaired by brief neonatal exposures of the infant pups to an unfamiliar environment depending upon whether the mother rat is good at regulating her own stress hormone.

"Familiarity of the mother and the novelty afforded by the postnatal environment are two contrasting sources of neonatal influence," said Tang in the paper. "One hypothesis regarding their relationship is the maternal modulation hypothesis. The hypothesis predicts that the same neonatal stimulation may have different effects depending on the maternal context."

This theory leverages and builds upon the stress inoculation hypothesis proposed by Dr. David Lyons of Standard University, which suggests that small doses of stress when given in repetition can serve as an inoculation and further integrates it with the idea of a maternal switch suggested by Dr. Regina Sullivan that the mother can cause her infants to acquire two opposite behaviors, either approaching or avoiding the same environmental stimulation.

The researchers tested the hypothesis by first dividing each litter of rat pups into halves (split-litter design) with one half spending three minutes a day away from the home cage for the first three weeks of life while the other half always remaining in their home cage. They then monitored physical development indexed by body weight across the life span.

To obtain a measure of maternal context, after the pups were weaned mother rats' stress regulation was indexed by an initial swim-stress–induced corticosterone (CORT) response measured within five minutes of 1 min swim test. It is viewed that the larger the mother rats can mount an initial CORT response, the more able the mother rats are at regulating her stress response. This is different from the sustained high levels of CORT response measured some time after the stressor.

"During infancy, brief experiences of a non-home environment can increase or decrease offspring body weight depending on the dam's characteristics of self-stress regulation," said Tang. "We refer to this finding as maternal modulation of novelty-effect on early growth."

In considering potential significance of this finding, Tang cited the work of Dr. David Barker from England on the association between early growth and long-term health consequences. Risk of death associated with coronary heart disease, type 2 diabetes, and hypertension are nearly halved if one's body weight at infancy happens to be within the top 20 percent in comparison to those at the bottom 20%. Both the top and bottom 20% are based on statistics collected from individuals within the normal birth weight range, not including premature babies.

"The current study does not directly investigate the combined novelty exposure and maternal influence on the probability of contracting these chronic disease later in life", said Dr. Tang, "however, we are actively looking for opportunities to collaborate with medical researchers within the research community to conduct further studies to examine how maternal stress regulation might interact with non-maternal environmental factors to impact long-term health consequences."

The team followed the rat pups from infancy to late adulthood and found that the effects of novelty exposure on body weight remain sensitive to the earlier postnatal measure of maternal stress regulation one year later. This demonstrates that the impact of joint maternal and non-maternal influences is not transient but long-lasting. It is important to note that all the body weights at adulthood are within the normal range, therefore, the heavier rats are not obese but simply larger, and perhaps stronger and fitter, than their smaller siblings.

One surprising finding emerged from this later adulthood weight measurement is that the enhancing effect of neonatal novelty exposure on body weight within the normal range was found among offspring of rat mothers who provided the least amount of maternal care after the litter experienced a brief litter disturbance.

This was indeed the case in the study. The novelty-exposed adult offspring weighed more than their home-staying siblings if their mother provided more reliable care during infancy even if that means less total quantity of care.

Together these findings highlight the critical importance of maternal context in enabling the same early life intervention to have a diverse range of effects across different rat families.

It further highlights the importance of recognizing a multitude of maternal influences and of considering not only maternal care but also maternal self-stress regulation in policy-making related to child rearing.

Therefore, some laws of nature cannot be discovered if one focuses on isolating the effect of one source and on ruling out the influence of the other because development takes place in a rich multi-dimensional biological and social context, as has been argued for by Drs. Walter Michel, Bruce Ellis, and Jay Belsky, all leading researchers in human development.
Dr. Tang is proud of her former undergraduate research assistant and PhD student, Dr. Bethany Reeb-Sutherland, a research scientist at the University of Maryland, for being the pioneer in her lab to consider the role of the mother in modulating a variety of early life intervention effects that her lab has been documenting over the past fifteen years here at the University of New Mexico, and Ms. Zhen Yang, a current graduate student who had worked so hard to overcome her allergies during the weighing of the rats at multiple stages of their development and who had been so patient and persistent in her careful analysis of the complex set of data.

Tang is particularly grateful to her collaborators including Drs. Bruce McEwen and Russell Romeo, both leading experts in stress research, at Rockefeller University and Columbia University respectively. She said that "the joy of working with others is in arriving at a place where one would not have arrived all by one self -- a much broader perspective in the interpretation of research findings."

To read the paper, go to Maternal Modulation of Novelty Effects on Physical Development. 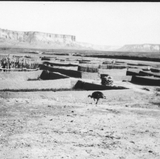 Research delves into role of turkeys to Ancestral Pueblo peoples 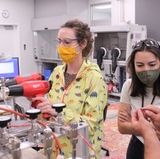