In his first visit to the United States, Pope Francis made headlines around the world and was greeted by hundreds of thousands of American Catholics and non-Catholics alike. And for University of New Mexico sociology Professor Richard Wood, to see and study the pope on American soil was a special experience.

“What I focus on is the intersection of faith and public life in the United States,” said Wood, who is also the chair of UNM’s Department of Sociology. “Think of it as religion and politics, but really thinking about when people of faith, of any tradition, come into the public arena, what difference does their faith make as they vote and as they take positions on issues.”

Wood traveled from Albuquerque to Washington D.C. and Philadelphia with about 150 other New Mexicans. He watched Pope Francis address Congress from the West Terrace of the U.S. Capitol building and attended his speech on religious freedom and immigration at Independence Hall in Philadelphia.

Wood said there were two things during his visit that stuck out to him. One was the pope’s message about love and his request of all Americans to reach out to one another and close the gaps in our society. 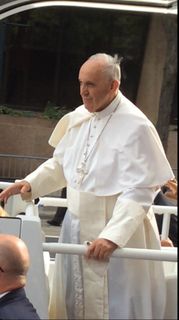 Pope Francis in the 'Popemobile'

The second thing that struck him during his visit was how the public was responding to the pope’s message. Wood heard from people of all faiths and backgrounds, not just Catholics, who said they were excited about this papal visit. Wood said it’s that kind of wide reach that Pope Francis has that sets him apart and opens the Catholic Church to a wider audience.

"There is this kind of charisma about him that's very powerful." – Richard Wood, UNM chair & professor, sociology

While in Philadelphia, Wood also had the chance to join in a meeting of the PICO National Network with Cardinal Peter Turkson, the president of the Pontifical Council for Justice and Peace and an advisor to Pope Francis. Wood said they spoke about the role of the Catholic Church in catalyzing grassroots work for the common good around the world, as well as the importance of holding politicians accountable to that task.

Along with his research, Wood said the trip was also exciting on a personal level. As a practicing Roman Catholic he wasn’t only interested in what Pope Francis had to say for his studies, but for himself too.

“I saw it both from this lens as a researcher and from a lens as a Catholic who is excited about this pope’s message and what he represents in terms of a broad appeal to our best instinct for the common good,” said Wood.

But even with all the excitement, the pope’s visit wasn’t without some issues according to the UNM professor. For one, Wood felt the Vatican handled poorly the canonization of Junípero Serra, the 18th century Franciscan friar responsible for spreading Christianity throughout the west coast.

“It seems to me it was done without adequate recognition of the historical trauma and contemporary pain of Native American communities,” said Wood.

Also, in his opinion, Wood said he does not agree with the decision to meet with Kim Davis, a county clerk in Kentucky refusing to issue same-sex marriage licenses because of her religious beliefs and despite her responsibilities of office. The details of the alleged meeting are being disputed by the Vatican.

“It’s being framed as a matter of conscientious objection and religious freedom, but I just don’t think that’s right,” said Wood. “She’s a county clerk with official duties and I think for her to object personally is one thing, but for her to resist having her office do those kinds of marriages is no longer conscientious objection, it’s the refusal to have her office do its legal duty. It’s not the kind of thing the church should intervene in.” 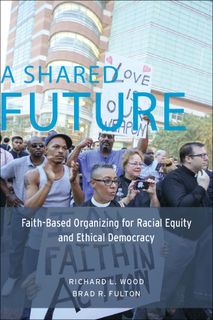 Wood said his trip and associated research is related to a book he wrote coming out in about a month called, “A Shared Future.” While it’s too late to include this research in that book, Wood said he does plan on doing further writing and public speaking about what Pope Francis’ visit means and how it’s being interpreted by Americans. He said he also plans to do additional research on how the visit shapes the upcoming election cycle.

“Catholics are still about 22 percent of American voters, and if the pope’s message addresses them and helps them think and reflect on how they’re voting, that potentially makes a huge difference in the elections,” explained Wood.

But regardless of what Pope Francis said and how many people were excited to see him in the U.S., Wood said the real test is what happens once he goes back to the Vatican.

“At the end of the day I think the real action here isn’t in what the pope says but in how the rest of us, American Catholics, and Americans of other faith traditions, and secular Americans respond to that message,” said Wood. “He’s calling us to responsibility in the face of climate change, he’s calling us to widen our circle of concern for marginalized people in America. The real action lies in how we respond to those messages.”