By Steve Carr May 29, 2013
Categories: Inside UNM
New research by scientists at the University of New Mexico suggests that future warming may lead to above average monsoonal moisture. While that sounds like a ray of sunshine especially to farmers in arid regions, the extra moisture is likely to be counterbalanced by increased evaporative loss.

In a paper published today by Proceedings of the National Academy of Sciences (PNAS) the scientists, including UNM's Yemane Asmerom and Victor Polyak, and Jessica Rasmussen, Leander (Texas) Independent School District; Stephen Burns, University of Massachusetts; and Matthew Lachinet, University of Nevada, Las Vegas, document extended drought and pluvial (wet) cycles over the past 1,500 years.

They used annual band thickness and stable isotope speleothem data originating from Bat Cave, a room in New Mexico's Carlsbad Caverns. The ages were derived from counting annual layers and confirmed by radiometric dating using short-lived isotope daughters of uranium. In this study, similar to tree ring layers, increases in precipitation result in increases in growth thickness. The observations are further supported by the stable isotopes of carbon and oxygen data.

"During the late Holocene, climate in western North America was highlighted by periods of extended aridity intervals called megadroughts," Asmerom, the lead author, said in the paper. "The droughts, we have found, are linked to cool Northern Hemisphere temperatures and North Atlantic sea surface temperatures (SSTs).

"During the past millennium several megadroughts were evident, including a multi-century drought, called a Super Drought, which lasted more than 300 years from 1350-1650. That time period also corresponds to the coldest period of the Little Ice Age. The coherent timing in changes in precipitation between southwestern North American, Chinese and West African monsoon suggests the megadroughts were hemispheric in scale."

"Our analysis shows that the summer monsoons in North America, Asia and North Africa were all behaving the same way during these large-scales climatic changes, including the extended drought during the early Little Ice Age," Asmerom said.

The past 1,500 years, including the Medieval Climate Anomaly and Little Ice Age, are of particular interest because this period contains significant natural climate variability before the large addition of green house gases from human burning of fossil fuels. These natural fluctuations in climate represent important points of validation for models of future climate change.

According to Asmerom, the magnitude in the changes in solar insolation, at least in the visible spectrum is small. "There are large changes in the upper atmosphere ultra-violet solar radiation budget, however, and may have influence in atmospheric circulation and sea surface temperatures," Asmerom said.

At shorter time-scales, the various monsoons don't act in unison. For example, decadal scale changes in North Atlantic SST, indexed by Atlantic Multidecadal Oscillation (AMO), have opposite effects on our (North American) monsoon and west African monsoon, including the drought-prone Sahel region of Africa.

During warm (positive) phases of the AMO, similar to the current condition, summer monsoon rainfall in our region decreases from normal, while increases in west African monsoon are observed. While during the negative phase of the AMO, similar to conditions that prevailed during the 1970s to the 1990s, our monsoon moisture increases while the opposite happens in the Sahel region of Africa.

The hemispherical scale changes observed by Asmerom and co-investigators are of longer time-scales, imposed on the short-scale variability related to the AMO and even the shorter cycle El Niño-La Niña cycle (5-7 years).

The research is important in helping scientists develop past climate models and their associated atmospheric climate anomalies while building a unified global understanding of future climate change. Given future warming due to increases in greenhouse gases, for our region, any increases in moisture from increase in summer precipitation may be wiped out by increase in evaporation, while increases in precipitation in more humid regions may lead to increases in effective moisture. Some have referred to this scenario as "the poor will get poorer while the rich will get richer."

"But, it could have been worse," said Asmerom. "We could have had a worse scenario, by which warmer climate leads to diminished monsoon precipitation, as some have speculated previously. But that does not seem to be the case, based on our study." 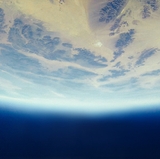