UNM researchers make recommendations on use of body camera recordings

A report from the University of New Mexico's Institute for Social Research to the City of Albuquerque says the city needs to create a clear policy for the use of On Body Camera Systems for Albuquerque Police Department officers. The report released by the city says researchers “believe the current policy is confusing and officers do not understand the policy.”

UNM researchers, led by Senior Research Scientist Paul Guerin, analyzed data from 2014. They found that 573,199 videos were uploaded to a special cloud-based server during that year. During the same time period there were 723,172 calls for service.

“They need a clear, concise policy with examples. It is even necessary in cases of capturing video of traffic incidents. Is the policy discretionary or mandatory? It should have components of each.” – Sr. Research Scientist Paul Guerin

The videos in the On Body Camera System were activated by individual police officers as they interacted with the public. Video duration was on average 5.44 minutes.

In addition to analyzing information, Guerin's research group conducted a number of focus groups of patrol officers, sergeants and lieutenants to better understand concerns officers had about use of the videos.

“They need a clear, concise policy with examples,” Guerin said. “It is even necessary in cases of capturing video of traffic incidents. Is the policy discretionary or mandatory? It should have components of each.” 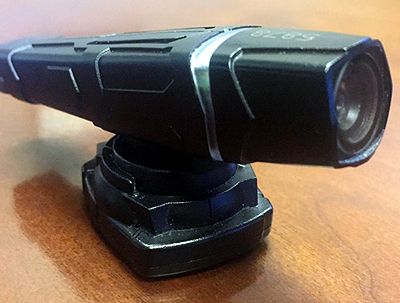 A sample of a Taser lapel camera used by the Albuquerque Police Department.

It is also not clear at what point the video should become public. Should it be release immediately or should it be withheld until the court case is completed?

Officers in the focus groups expressed concerns about the privacy of individuals when they contacted citizens who were underage, inside their own homes or mentally unstable. Concerns were also expressed regarding casual contacts with citizens and videotaping victims and witnesses.

Guerin noted the technology is constantly changing and he hopes a group will be appointed to address the information technology challenges of dealing with the video recordings.

UNM Senior Research Scientist Dan Cathey, who did much of the work on the report, says this area of research is only just beginning to develop. He noted that UNM's report “is unique in tying calls for service to the videos uploaded by the officers.” He said they could find no other research in which this has been done.

In a news release, the Albuquerque’s mayor’s office promised a new policy for the camera systems will be developed within the next few months.